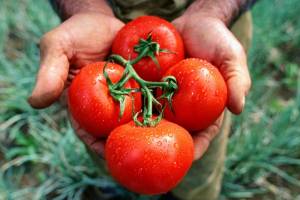 HAVANA TIMES — Dozens of tons of tomatoes are rotting in Guantanamo because nobody is collecting them, according to what journalist Lilibeth Alfonso tells us on her personal blog.  Apparently, there isn’t any diesel for private trucks who could distribute them to the population.

However, fuel shortages haven’t affected the supply needed for the Agriculture Ministry’s four-wheel drives or the modern 4×4 Korean cars that the leaders of the National Association of Small Farmers in Cuba (ANAP) use, which continue to run on and consume diesel on Havana streets, traveling from office to office.

Fellow journalist Singh Castillo wrote in that “Tomatoes are rotting in the Caujeri Valley. This is happening because of the fault of all of those involved in the matter, starting with farmers, agricultural cooperatives, the state company, municipal and provincial Agriculture offices.”

Agricultural engineer Fernando Funes has stated that, every year, 50% of harvests are lost in Cuba because of poor collection systems, a lack of storage spaces, the inability to process these crops, insufficient transport systems and an awful distribution system.

An ANAP leader told me that they had fixed the problem of food rotting when nobody can distribute it. They force farmers to take out an insurance policy which then pays them for everything they lose. They turn the mattress over without really solving the problem at the heart of this situation.

Farm sector bureaucrats aren’t worried about losing dozens of tons of tomatoes, they don’t care if the country pays 2 billion USD a year to import food or that ordinary Cubans have to pay more than what they earn in order to take food home.

They don’t seem to take into account the fact that the agricultural sector consumes 60% of the water at a time when Cuba is experiencing full-on drought. How much water is wasted on watering tomatoes which then rot in the fields of Guantanamo and other crops which are then lost across the entire island?

The expense of the agrarian bureaucracy’s “lack of foresight” doesn’t stop there. Now, when the government is looking for a way to save fuel in every sector, we should also calculate how much oil was imported to drive the water used for watering these fields for no reason whatsoever.

They have been giving different excuses for poor harvests for decades. Generally-speaking, it was the climate, the drought or heavy rains that were to blame. Now, the harvest has exceeded estimates, and they blame the good weather and explain that they “underestimated the yield of this harvest.”

How can you explain the fact that Cuba is never “taken by surprise” by a hurricane but it is unable to foresee a good harvest? It’s simple, Civil Defense troops don’t leave anything to chance, they are always ready to take on any variables and use all of the resources that might be necessary, which is why they save lives.

But do we have to alert every farmer that the weather is good, that there are enough seeds, that pests are under control and that by working hard, they can end up causing a crisis for our officials? Is there anything else more ridiculous than talking about overproduction in Cuba’s fields?

You don’t have to be Einstein to know that you don’t get different results in agriculture by keeping the same governing institutions, the same men leading them and by using the same methods which have failed time and time again for decades.

My colleague Singh Castillo claims that tomatoes being wasted are “the responsibility of everybody involved.” This is a foolproof analysis so that at the end of a meeting nobody is to blame, just like a song from the duet Buena Fe says.

In the face of situations like this one, which affects the national and local economy, you can’t divide the blame up between everyone. The old principle of “collective work and individual responsibility” is the one which allows the most incompetent leaders to shake off their blame and focus on everyone else instead.

They can continue to call for meetings to make analyses of the situation, but this chaos will continue to take place while officials get away with their inefficiency and don’t pay for it by losing their jobs and the privileges that these give them: air-conditioned offices, cars, fuel, internet, allowances and trips.

3 thoughts on “Cuba and Its Rotting Tomatoes”