HAVANA TIMES, Sept. 24 — For years the courts have not been able to decide who holds ownership to the brand name Havana Club.

Cuba has filed complains against the United States on more than one occasion before the World Trade Organization regarding violations of accords adopted by the WTO institution regarding the appropriation of brands.

The Cuban delegation to the Permanent Mission in Geneva insists that “the only solution is the total abolition of the law known as Section 211?, approved by the US Congress and in force in the United States since 1998, which blocks the Cuban holder of Havana Club rum from filing a lawsuit in the US against the Bacardí company for their use of the brand name.

Since 2002, the Dispute Resolution Body of the WTO has considered Section 211, which protects Bacardí, to be unacceptable.

The French liquor and beverage group Pernod Ricard is also involved in the dispute and seeks to: “… prevent the illegal use of the name Havana Club by Bacardí in the United States.”

For more than a decade both companies have experienced setbacks and victories in their long commercial and legal battle over the name.

It all began in 1994 when Bacardi began its crusade against Havana Club when the rum hit the international market as a result of a trade agreement between the Cuban state company Cubaexport and the French multinational Pernord Ricard, which led to the creation of the joint venture Havana Club Holding, S.A.

Since then, Bacardí, a leader among the powerful Cuban American businesses in the US, has dug in its heels, defending their commercial interests by making the most of important connections with US political power.

The brand Havana Club had been registered in the US since 1974 by Cubaexport but since the imposition of the economic blockade in the early 60’s, sales of the Cuban rum, like all other Cuban products, has been barred there.  Then, in 2006, the US arbitrarily refused to allow Cuba to renew the brand name that belongs to it.

In 1994, Bacardí solicited a license to use the brand name and introduce a new rum to the US market, which is made in Puerto Rico, under the label Havana Club. It is important to understand that the original brand never belonged to them. It belonged to José Arechabala, S.A. (JASA).

Arechabala had let their registration of the brand expire in 1973, losing the legal right to it.  Nonetheless, they sold it in 1997 to Bacardi when the heirs of the Arechabala family reached an agreement by which, from that moment on, Bacardí would litigate on behalf of the company.

Thus, when the Arechabalas sold la brand name Havana Club to Bacardí they weren’t the owners.  But this didn’t seem to matter because Barcardí believed that their influences in the US government were all that was needed.

The French firm stresses that over 15 years ago they’ve sold millions of cases of Cuban rum under the name Havana Club via a joint venture between Pernod Ricard and Cuba Ron in more than 120 countries around the globe.

According to Cubainformación: media project of EUSKADI-CUBA, a Cuba friendship and solidarity association in the Basque Country), the current situation is:

The Supreme Court of Spain has rejected the appeal filed by Bacardi& Company, Ltd and the decedents of the Arechabala family against the 2007 ruling by the Provincial Court of Madrid which determined that ownership of the brand name Havana Club belonged to Cubaexport, the joint venture between the French liquor company and Cuba. The litigation between Pernod Ricard and Bacardi over the Spanish market began in 1999 when the US holding filed a suit claiming ownership of the Havana Club brand. In 2005, the court of first instance recognized Cubaexport as the legitimate owner of the brand. Bacardí appealed and in 2007, the Provincial Court upheld the ruling. That decision has now been ratified by the Supreme Court. The other battlefield for the Havana Club name is in the US where court decisions have favored Bacardi and where Cubaexport currently has two suits pending.

Cuba solidarity organizations and Cuban émigré associations in Europe want to step up the international campaign against Bacardí by calling a boycott under the slogan “Bacardí, un mal trago (a bitter drink)”. Among those promoting the boycott are:

They say that Bacardi has direct ties to and finances the extreme right-wing Cuban American organizations in Miami, especially with the powerful Cuban American National Foundation (CANF), implicated in numerous terrorist attacks in Cuba. They call on: the hotel industry, distributors and public consumers to reject Bacardi products, which are sold with a false Cuban image, in an attempt to educate the public about the company’s involvement in the economic blockade suffered by the Cuban people.

In 1935, the great grandfather of the current patriarch Ramón Arechabala was the original founder of the recipe and the brand name Havana Club. The company was nationalized in 1960 by the revolutionary government. 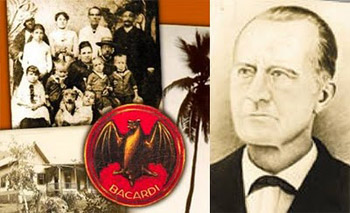 The Arechabala family, like Bacardí and all the large Cuban proprietors did not accept la intervention that forced them to abandon their facilities and head to the US to await the fall of the new government when they would return to the island. That never happened.

When in 1993, the Cuban government signed an agreement with the French company Pernod Ricard to produce and distribute the rum under the original brand name, Havana Club, the Arechabala who at that time was not economically solvent, wanted to protect their interests and would go on to sell the recipe and name to Bacardi, with which it sympathized for having suffered the same interference by the Castro government.

On the one side, Cuba says it is the only entity that can sell real Havana Club, made on the island. On the other, the Arechabala family says that only they have the original recipe and that the appropriation did not confer use rights to Cuba. They further argue that even though their version is made in Puerto Rico, it is still original Cuban rum.

The History of Bacardí

Between 1828 and 1832 the Bacardi brothers arrived in Santiago de Cuba from Sitges, Barcelona. One of them, Facundo, went into business distilling sugar cane. By 1838 he married Lucía Victoria Moreau, a young girl of French decent born in El Caney.

In 1862, with few resources but much imagination they opened a small distillery with a sheet metal roof, an old cast iron still, and a few fermentation tanks and aging barrels. After much experimenting, Facundo perfected his formula.

There were a lot of bats at that location so Lucía Victoria (also called Amalia) decided to adopt the bat as the symbol of their new business. According to ancient legends of the Taino Indians of Cuba, bats are the symbol of wisdom. Local popular mythology claims they bring health, fortune and family unity.

The bat became the trademark of Bacardi which quickly became a famous liquor brand. With the passage of time, new technologies, and greater distribution it became an important early distillery of a powerful industry.

In 1874, the aged mixes in oak barrels gave rise to the first genuinely Cuban rum, best known as  Bacardí 1873 or Extra Seco (Extra Dry), different from any other mix. It won a gold medal in the 1889 World’s Fair in Paris and was declared to be the King of Spain’s brand.

Upon the death of Facundo, his decedents maintained the “secret formula”. For generations the business was successful in Santiago de Cuba, and other locations around the country, making the family one of the wealthiest that ever lived in Cuba. Since the beginning the company has remained in the family.

After the coming of the Revolution and the accompanying nationalizations, the owners of the company decided to move to Puerto Rico, where they had established a distillery in 1936 in order to avoid paying duties on the rum exported to the US.

That distillery, located in the town of Cataño, is considered the biggest in the world. It produces 100,000 gallons of rum per day with most of the company’s operations still centered there.

Their facilities are part of Puerto Rico’s tourist attractions. The Casa Bacardí museum has guided tours where visitors learn the history of the family, the company, and the production and taste different samples of the famous liquor.

The company has offices in Miami and its headquarters are in the Bermudas where it is registered as Bacardi Limited. It is currently worth several billion dollars.

To make good rum only requires the right ingredients, effort and patience. Made in Cuba or in Puerto Rico, if you are using the same formula the results will be identical. As the saying goes there is nothing hidden under the sun and when the Bacardi family left in 1960, the veteran workers of the company remained and began producing Caney rum. Tasters could not detect the slightest difference between the original and the new liquor. Only the name and bottle changed. The King of Rums or the Rum of the Kings maintained its unmistakable and unique taste.

Only political positions and pressures have converted into a trademark war one of Cuba’s best creations– its excellent rum.

5 thoughts on “Cuba and the Havana Club Rum Wars”