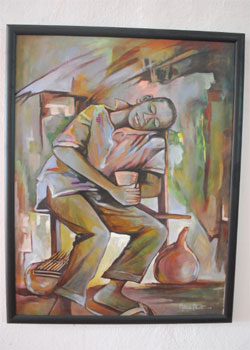 HAVANA TIMES — The 22nd Cuba Book Fair is a small window to Angola, and through it we can capture a glimpse of the culture and identity of that nation, linked to our past. We get a chance to see contemporary artistic creations from Angola and also photos of ancient rock paintings from the Tchicundo Hulu area.

In one hall are displayed wicker fiber crafts, wood carvings, prints, and photos of current day Luanda, with its highways, tall buildings and annual carnival celebration.

There are sculptures by Mpanda Vita, paintings by Alberto Matondo and Jorge Gumbe, and Angolan music and poetry. Lovers of stamp collecting can tour the country through its postal stamps thanks to a book published in Cuba.

Much is said about the bonds of friendship between Cuba and Angola. Indeed, the phrase serves as a hook to attract people to the “Cabaña” fortress (the main site of the book fair). We talk about this as being a veritable family reunion – and that’s true. For example, some of the Angolans artists exhibiting here studied under Cuban instructors.

One of the Angolan books published by Cuba’s Editorial Oriente, El rastreador de dinero, recounts the ups and downs of the protagonist leaving his state sector job and becoming a “self-employed” worker. 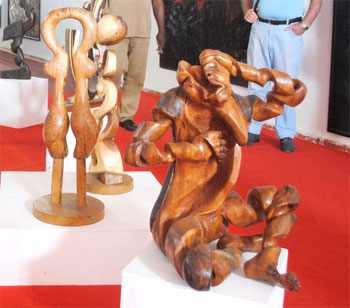 In the opening pages, the private sector worker talks about how he cheated the government when he was working as a messenger. Author Roderick Nehome uses a lot of jargon, but — since the translation is Cuban and the subject’s so topical — the book seems as if it were written by one of our own.

We have many things that unite us to Angola. How many Cubans were deployed to Africa to fight against apartheid, to build, educate and heal! This is the theme of many of the books at this year’s fair.

The works are especially about the war. That theme is even included in one of children’s comic books: Cuito Cuanavale, about the decisive battle that rooted out the forces of apartheid. Other testimonies narrate the heroic acts of Angolan and Cubans in those struggles.

The presentations of these books, attended by military personnel (officers and cadets), produce constant cheering about the brave Cuban troops who defended the sovereignty of a sister nation. 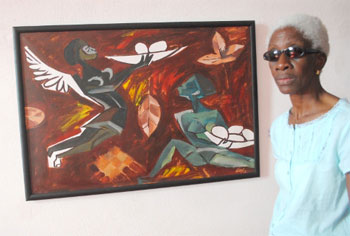 All that’s fine, there’s no doubt of the courage that was displayed by the soldiers from the island. But when we talk about war and internationalism, I always feel that something remains off the table, despite it too being something very important.

This other side involves not only the number of casualties. Such figures are often cold, distant. Behind the thousands killed in Angola were families who were left without children, without fathers, without mothers, without solace.

Likewise, thousands of people didn’t return the same – they came back physically and emotionally maimed. A deep sadness always accompanies the victories.

I walked around the Cabaña Fortress looking for those families. I went in the bookstores trying to find some paper of someone giving a presentation about the feelings, the loss, and the bitterness. But that isn’t at the book fair or in the books. There are no testimonies.

The book fair concludes its Havana segment on Sunday but will then open in other Cuban provinces during the next two weeks.

6 thoughts on “Cuba Book Fair: Something Is Missing”