HAVANA TIMES, Nov 20 (IPS).- Cuba and China strengthened their political and economic alliance this week, at a time when the EU and Cuba have formally restored relations and the government of Raul Castro is forging closer ties with the rest of Latin America and with Moscow. 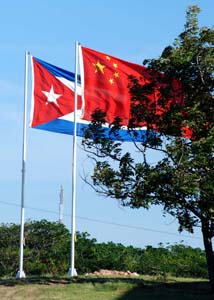 Chinese President Hu Jintao’s two-day visit to Cuba, which ended Wednesday, built bridges between two nations that are geographically distant but ideologically close, above and beyond their different political and economic strategies.

As a sign of the level of bilateral relations, Hu visited ailing former president Fidel Castro early Tuesday. Although he is still secretary of the governing Communist Party, Castro stepped aside as president and was replaced by his brother in July 2006, due to illness.

On prime time news, Cuban television showed a photograph of Hu meeting with Castro — the first image of the 82-year-old former president released in months.

On Monday, the local Granma newspaper reiterated Fidel Castro’s oft-repeated view that “no two socialist revolutionary processes are absolutely the same,” and each country must adapt to its own specific conditions.

Raul Castro, meanwhile, showed that his appreciation of China and its political process goes back a long way, when he sang in Chinese, in front of his guest and more than 300 Chinese students, a song dedicated to Mao Zedong (1893-1976), which he learned at a left-wing youth congress in Vienna in 1953.

As part of an educational exchange program, 1,917 Chinese students are currently studying in Cuba, earning university degrees in Spanish, medicine, nursing, tourism, teaching humanities and psychology. “We are far away from our families, but they take good care of us and treat us well here,” a 19-year-old Chinese woman told IPS.

After their official meeting, the Chinese and Cuban leaders signed a number of agreements, which were added to earlier accords finalized by an intergovernmental commission, on Chinese imports of Cuban sugar and nickel, the upgrading of Cuba’s ports, and investment in biotechnology.

“The meeting reaffirmed the excellent state of current relations between the two parties and governments and the firm proposal to strengthen those links further still in the future,” wrote Granma.

The agreements also postponed payment of several debts that Cuba owes China and included a 70 million dollar loan for the renovation of Cuba’s hospitals.

The aid has come at a time of financial difficulties in Cuba, in the wake of three hurricanes that caused an estimated 9.7 billion dollars in damages.

“It was a good trip with good results, as the visits of Chinese presidents always are,” Raul Castro said at the airport after seeing off Hu, who left Wednesday for Peru, where he will take part in the Asia Pacific Economic Cooperation (APEC) forum summit.

This was Hu’s second visit to Havana as head of state. During the first, in November 2004, a number of agreements were signed and he met in private with Fidel Castro, who decorated him with the José Martí order, the highest Cuban government recognition of foreign personalities.

This Caribbean island nation of 11.2 million has had diplomatic ties with the Asian giant, home to 1.3 billion people, since Sept. 28, 1960, although the degree to which relations between the two countries have been close has varied depending on the stances taken by their governments at any given time within the socialist bloc.

Medvedev’s trip will improve relations between Cuba and Russia, which has been invited by Cuban officials to become a major investor in the energy, tourism and mining industries.

In late October, the EU formally renewed ties with the government of Raul Castro, and Cuba and the European bloc resumed political dialogue to overcome differences and reestablish cooperation, which was broken off in 2003 after the bloc imposed diplomatic sanctions on Havana for the imprisonment of 75 “dissidents”.

Havana has also strengthened its position in Latin America with the Nov. 13 approval of its admission to the Rio Group, the main Latin American mechanism of political consultation and coordination, which was created in the mid-1980s.

Invited by Lula, Raul Castro will travel to Brazil in mid-December to attend the first Latin American and Caribbean summit on integration and development, and to make a formal visit to Latin America’s giant.

Venezuelan President Hugo Chavez said in Caracas that Castro had received invitations from Brazil, China, Russia and other countries, but that Venezuela would be the first to receive a visit by him “in the next few days.” The announcement has not been confirmed by Havana.

The new dynamism of Cuba’s foreign policy is becoming apparent on the eve of the change of administration in Washington, where President-elect Barack Obama has promised to ease restrictions on Cuba adopted by the government of outgoing President George W. Bush.