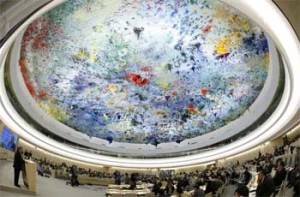 HAVANA TIMES – Five years after the ethnic civil war in Sri Lanka was won by the Sinhalese government, with thousands of Tamil civilians killed in the final weeks, the UN Human Rights Council authorized its High Commissioner to investigate if human rights abuse occurred. Cuba was in the minority opposing the investigation.

On a vote of 23 for, 12 against and with 12 abstentions, the HRC voted to promote reconciliation, accountability and human rights in Sri Lanka by having its High Commissioner, Navi Pillay, and her successor soon-to-be:

“To undertake a comprehensive investigation into alleged serious violations and abuses of human rights and related crimes by both parties [referring to the Liberation Tiger of Tamil Eelam guerrilla organization as well as the government] in Sri Lanka during the period covered by the Lessons Learnt and Reconciliation Commission, and to establish the facts and circumstances of such alleged violations and of the crimes perpetrated with a view to avoiding impunity and ensuring accountability, with assistance from relevant experts and special procedures mandate holders.” (1)

The Commissioner will then “present an oral update to the Human Rights Council at its twenty-seventh session, and a comprehensive report followed by a discussion on the implementation of the present resolution at its twenty-eighth session.” The process could take three years.

Sri Lanka’s government rejected the High Commissioner’s report and the resolution as “interference into a sovereign state.” This is the position that Cuba takes as well.

This resolution is the fourth since May 2009, and the third sponsored by US/UK and allies. The resolutions of 2012 and 2013 merely asked Sri Lanka to implement its own Lessons Learnt and Reconciliation Commission (LLRC) mild report, in which no mechanisms were proposed to end impunity for those who committed human rights abuse.

The biggest surprise in these sessions is that India abstained instead of voting yes as had been expected. This is a boon to Sri Lanka’s President Mahinda Rajapaksa and a disappointment to Tamils.

India, like Sri Lanka, maintained that the resolution will “undermine national sovereignty;” also that it is an “intrusive approach, counter-productive,” and that the tough language “will hinder efforts” for rehabilitation.

Some analysts believe that India may also object to the resolution because it could set a precedent that might implicate India for its conduct in Kashmir.

A renowned lawyer in international law, Professor Francis Boyle, criticized the final resolution for being ineffectual. He told Tamil Net that,  “While noting that `investigation´ by the UNHCR is better than nothing—with all due and sincere respect for the UNHCR—dissemination of that `investigation´ will be subject to the control of the UN Human Rights Council for political reasons…and the dissemination of that UNHCR `investigation´ will be dragged out…thus enabling the GOSL to continue its campaign of ongoing genocide against the Tamils despite the requirement of article 1 of the Genocide Convention that every UN Human Rights Council state member is obligated both `to prevent and to punish´ the GOSL for genocide against the Tamils.”

Gajendrakumar Ponnambalam, president of a small political party in Sri Lanka, the Tamil National People’s Front, concurs with the Permanent People’s Tribunal in the necessity of addressing genocide.

He asserted that, “the remedy for violations…cannot be anything short of a judicial process through the ICC [International Criminal Court] or an Ad Hoc special tribunal,” adding…”anything less would undermine the concept of international justice and the application of humanitarian law.

In the “real world” of geo-politics, Cuba, China, Russia and Venezuela stand against the Western-led resolution, which all other Latin America states supported. They oppose any investigation or sanctions for human rights abuse. China’s President Xi Jinping said that his government opposes “politicizing and imposing double standards on the issue of human rights”. On the sidelines, China and Cuba point out the hypocrisy of the key accusing nations for numerous aggressive invasions of sovereign states and human rights abuse of their peoples while they enjoy impunity.

Tamils could aid their cause by identifying with a report of UN Special Rapporteur Richard Falk. After six years as HRC’s independent expert charged with monitoring and reporting on human rights in Palestinian territories since 1967, he delivered his final report on March 21. He called upon the International Court of Justice to assess Israel’s occupation, which Falk characterizes as “colonialism”, “apartheid”, “ethnic cleansing.”

“We mustn’t forget that thousands of Palestinian political detainees, including children, remain in Israeli prisons. Among them are more than a hundred administrative detainees. Many of them are subjected to ill-treatment and torture from the time of their arrest to their interrogation in detention.”

The ethnic cleansing of Palestinians and Sri Lanka Tamils, the seizure of their homes and the false imprisonment and torture that the Zionist Israeli and the Sinhalese chauvinist Sri Lankan governments impose should bring those peoples together in a common struggle for liberation.