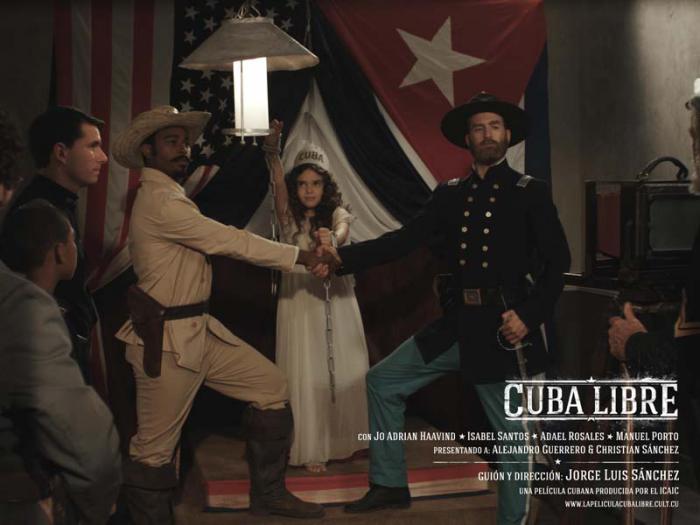 HAVANA TIMES — Cuba libre, Cuban filmmaker Jorge Luis Sanchez’ third feature, had to wait many years to reach the big screen and swell the list of domestic films to compete at the 2015 Havana Film Festival.

It all began in 1998, when Sanchez wrote the script that would be rejected on two occasions by the heads of the Cuban Film Art and Industry Institute (ICAIC).

Luck began to smile down on Sanchez after ICAIC president Omar Gonzalez approved the script in 2012. It was a complicated story in terms of production, the first epic Cuban film to depict the intervention of the US army in Cuba’s 1898 war of independence.

To write the screenplay, Sanchez conducted extensive historical research, a process that involved several visits to the archives of Havana’s Jose Marti National Library. In this connection, he remarked:

“This wasn’t a film someone commissioned me to do. The script of Cuba Libre came from the dark depths of my soul and my imagination. Simon, in fact, is inspired by my great grandfather, who was a colonel during the war of independence, and was named Simeon. My great grandmother was also named Ma’Julia, like the woman in the film. I thought it a good opportunity to pay tribute to them.”

Sanchez is aware that the re-establishment of diplomatic relations between Cuba and the United States on December 17, 2014 gives new dimensions to the film, set to compete at this year’s Havana Film Festival.

“I like my country’s history very much and I was particularly interested in that complicated moment for Cuba, where the feelings of a handful of children – near-teenagers – were manipulated by adults. I believe politics is what moves the world. I believe the war that awaits us is one of symbols and that battle has to be waged in the field of culture as well,” Jorge Luis Sanchez forewarns us.

Any period piece represents a challenge, particularly when filmed in Cuba, where the budgets demanded by these types of productions are not available.

From the word go, the production team set out to portray the era as realistically as possible. Art directors Nanette Garcia and Maykel Gonzalez faced an enormous challenge building large sets that would not look fake on screen.

A large volume of costumes had to be produced for the many extras who portrayed Cuba’s independence fighters, as well as Spanish, US and buffalo soldiers. The support of the Cuban Cultural Assets Association was vital in the design and production of the insignias worn by the different armies, as well as their hats, weapons and other items.

“Though this is the third film I work with Jorge Luis Sanchez on, this was the most difficult for me. I composed the score when the editing of the film had almost been completed, because I had doubts about the melody. The music for Cuba libre is symphonic, based on string instruments, with fairly simple melodies.”

The sound design, cinematography and mise en scene take us from an arid towards a livelier atmosphere as the film’s plot unfolds.

As the director explains, the characters of Cuba libre aim to capture the behavior of real people. As such, no mistakes could be made in terms of the casting of the adults and children of the film.

The film seeks to recreate part of Cuban history as realistically as possible. Sanchez chose Norwegian actor Jo Adrian Haaving to bring to life a US Army colonel. Haaving accepted the offer immediately:

“I immediately began to study US English. I met Jorge Luis Sanchez in Havana and felt we could work together. A film of this nature is a privilege that doesn’t come along often.”

“I asked to be provided with historical materials, books and photos I could study. I had the privilege of visiting Cuba and the United States for several weeks to study the character in depth. I focused on developing a US and Irish accent.”

Though the script has a number of problems in terms of dramatic development and these could not be overcome during the shooting of the film, the film is to be commended for the performances offered by all actors, from the children (Christian Sanchez, Alejandro Guerrero and Otto Bucholz), through young Adael Rosales, who cut his acting teeth with the film to such stars of Cuban cinema as Isabel Santos, Manuel Porto, Georgina Almanza and Serafin Garcia, among others.

“I love sober performances,” the director of El Benny said. “That’s why I work with Isabel Santos, one of the best Cuban actresses in terms of expressing powerful emotions subtly. This was the second film we worked together on. I think directing her is a bit complicated, because she takes on every new film as though it were her first, and that is very demanding for a director.”

What all of the actors who took part in the making of Cuba Libre are grateful for is the opportunity to make good, demanding cinema, and to reflect a part of the country’s history that has not yet been explored in depth by the island’s history textbooks.