HAVANA TIMES — The highly touted start of the Caribbean Series 2014 finally took place on Saturday and Puerto Rico and Mexico got off to a bright start. The first with a 7-6 come-from-behind 10th inning victory over the Dominican Republic, while the reigning champions lashed out 15 hits in a 9-4 drubbing of Cuba.

The day also was baptized with 6 home runs, so the event promises much offense if the inaugural date is any indication. 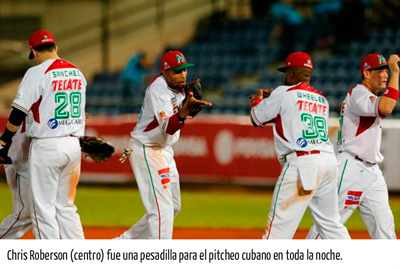 A 5-run rally midway through the game lifted Mexico, the current Caribbean Series Champions, over a Cuban team that left much to be desired in its return to the event. The final score was 9 to 4, but in reality the marked difference on the field was even more disproportionate, witnessed by 14,503 fans.

The winning pitcher, Alfredo Aceves (7 INN , 5 H, 3 K , 2 W, 3 ER), made good use of his team’s offensive contribution and the desperation the of Cuban hitters, throwing 86 pitches (55 strikes).

Overall the lackluster Cuban lineup combining with a poor use of relievers was fatal. A general nervousness was quite noticeable and with it not much more could be expected.

The task now is difficult for manager Ramón Moré, because not only did his team start on the wrong foot, but they have planted a poor image. If anyone thought the Cuban presence was going to breathe life into Caribbean Series, uncertainty depends only on convincing successes and on Saturday such material was not evident. 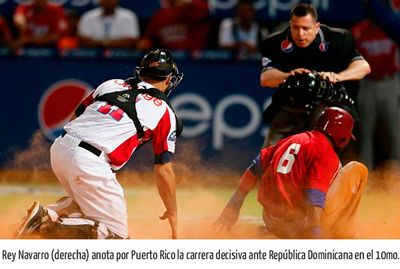 The Puerto Ricans managed by Carlos Baerga, came from behind to defeat 7-6, in extra innings, a Dominican Republic team that appeared highly dominant in the first third of the game. The Cuban Yunieski Maya pitched 4 brilliant innings for the DR, but was punished in the fifth, ending his performance badly and sooner than expected.

In the opening inning the Puerto Ricans scored first with a solo homer by third baseman Irving Falu homer (2-4, 1R , HR and 1 RBI). However the Dominicans were quick to respond, scoring two in the bottom of that same inning, one more in the second, two in the third and another in the fourth to take a seemingly safe 6-1 lead.

Yunieski Maya was breezing through four innings but the fifth took the shine off his performance. Only able to get one out he ended up with 4.1 innings, allowing 5 runs, all earned, on 6 very productive hits, while striking out 5 strikeouts. He threw a total of 70 pitches without bases and (49 strikes) .

Baerga’s disciples succeeded, after the first out in the fifth, getting 4 consecutive hits off Maya (including two doubles), which producing the same number of runs and sent Maya to the showers. In the sixth, after two men out, Luis Figueroa (2-4, 1 R and 2 RBIs) tied the game with a hit up the middle. The score remained static until the tenth.

With the score tied the relief pitching from both sides (8 pitchers saw action for each side) was well used and showed good control.

In the tenth Puerto Rico scored the winning run on a double by Rey Navarro (2-5, 2 R , 2 2B and 2 RBIs), a sacrifice by Falú and after an intentional walk, an infield grounder scored Navarro on a fielder’s choice.

PR pitcher Tyler Herron ran into trouble in the bottom of the tenth, tolerating a single by Ronny Paulino (1-2), sacrifice and a walk. But Hector Gomez (2-4, 1R, HR , 3 W and 1 RBI) and Ed Rogers (0-5) both flied and Herron picked up the save. Saul Rivera was the winning pitcher and Guillermo Mota took the loss.

The extremely long game (4 hours and 6 minutes) saw only one double play and the three runners who attempted to steal were all thrown out.

One thought on “Cuba Loses Caribbean Series Opener to Mexico”