That was the last major car accident to take place on Cuba’s central highway. This highway is so dangerous that some bus drivers say this to the passengers:

“If you want to arrive on time, please respect the time allotment for our stops. We can’t really go any faster, we’ve got to cross the central highway where cars are separated by a few centimeters and everyone’s going fast. It’s like risking one’s life every minute and we want you to arrive safely to your destination.”

The highway opened on February 24, 1931. It covers 1139 kilometers, from Pinar del Rio to Santiago de Cuba, and it’s narrow 6 meters of width are no match for the 21st century.

In the 1980s, an ambitious nationwide highway began to be built. It was designed to have 6 to 8 lanes and a separator in the middle. The stretch from Pinar del Rio to Havana and from there to Santa Clara was traced, all the way to Taguasco. On the other end, some 45 kilometers of mountainous terrain, the only obstacle in an otherwise level route, were cleared, starting from Santiago de Cuba.

The work was suspended in 1990, when 495 kilometers of road had been laid. The rest of the way, some 550 kilometers stretching from Santa Clara and the vicinity of Palma Soriano, must be crossed using the nearly-one-hundred-year-old road, where most accident-related deaths take place in Cuba.

On January 30, Granma and Juventud Rebelde newspapers published the number of car accidents that took place in 2015. Half of the opinions expressed are captured by these two comments:

“I think the biggest problem leading to accidents in Cuba is the poor state of the roads. This isn’t mentioned in this report. If we continue to make excuses for our problems, we’ll continue having accidents, injuries and deaths.”

“I think the Cuban government must complete the national highway. The large volume of tourists who visit the island is important and, to tell the truth, they don’t have very good opinions about the roads.”

Why do we not yet have the indispensable national highway?

To date, the size of the investment and the limitations imposed by the US embargo have been used to justify the precarious state of the project. A brief analysis of the situation demonstrates the opposite.

Shocked by the tragic accident in Jatibonico, a reader suggested, “so as not to ask for much, broadening the highway two lanes on both sides and adding a dirt road at the side where carts, bicycles and tractors driven by locals in these agricultural areas can circulate, since the famers don’t have any other road they can use.” The partition down the middle was implicit.

Calculating the cost of the previous proposal is complicated because most of it would be made in Cuban pesos. That said, in 1988, the 6-lane highway stretching from Havana to Pinar del Rio (some 170 kilometers long) cost 650,000 pesos per kilometer. If we round the figure to a million, factoring in the increase in the price of materials and the narrowing of the highway, we get around 550 million pesos. If we did this in the style of the new president, “slowly but surely,” and built 28 kilometers every year, the country would have had the modern highway in 20 years.

If anyone is still swallowing that tripe about the lack of resources caused by the notorious blockade, suffice it to recall the roads built over the ocean. 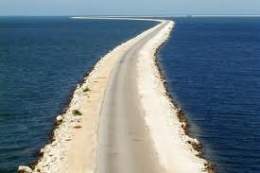 Between 1987 and the early 2000s, some 172 km of highway was built on rock embankments over the open sea and salt marshes, linking keys and isles at the Jardines del Rey municipality, towards the north of the provinces of Villa Clara, Ciego de Avila and Camaguey. Building something that long over land would cost considerably less, and there’s also the dubious financial soundness of the vast maritime bridges that were built and their negative impact on the environment.

There are many tourist destinations in idyllic islands that have no need of such artificial bridges. One needn’t leave Cuba to realize this, one need only compare Cayo Coco and Cayo Largo.

The former was connected to the mainland by a 17-km road over the sea. The shortest distance between Cayo Largo and the mainland is seven times that, making any such bridge unthinkable. However, both destinations have an international airport. In the Wikipedia article on the destination, we read that, “since 2005, tourists can fly to the Cayo Coco airport directly, rather than have to fly to the Cuban mainland.”

Both destinations are growing in terms of investments and visitors. Was the super maritime highway necessary?

The megalomaniacal whim of the stone embankment highways entailed an investment similar to the one required to build the nationwide highway. It would be pointless to enumerate the economic benefits to be drawn from such a highway.

The authorities address the immediate causes of accidents, but the root problem does not concern them.

Cuba’s National Road Safety Commission published chilling statistics: “during 2015, on average, there was a road accident every 47 minutes and an accident-related death every 11 hours.”