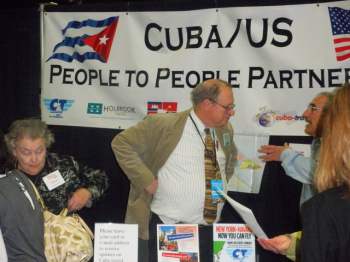 HAVANA TIMES, March 14 — The Travel and Adventure Show has a new participant on its nationwide tour this year: The Cuba/US People-to-People Partnership, whose information booth is supplying eager soon-to-be visitors to the island with the information they need to make their trip fit the new “purposeful travel” opportunities announced by President Obama last month. For an overview of the new policy, click here.

This weekend’s edition of the show was held in Washington DC where locals anticipate future direct flights from Baltimore International Airport as one of several airports recently approved to handle such charter flights.

The booth was frequented by enthusiastic teachers, students, photographers, artists, and others searching for a way to make the journey. A few Cuban Americans even stopped by who were unaware that they are now free to reunite with their relatives in their native homeland whenever they please.

US Congressman Sam Farr (D-Ca), who is co-chair of the Congressional Travel and Tourism Caucus, was the keynote speaker of a panel on Cuba travel in the Destination Pavillion, where he expressed his outrage over limitations to American citizens’ right to travel and urged everyone to tell their representatives to support legislation to remove all barriers against travel to Cuba.  See this video.

Sharing a glimpse at his personal experiences in Cuba, Rep. Farr admitted that there is no more exciting place to visit on the American continent. He mentioned the Sister City relationship between Santa Cruz California in his district and Guamá municipality in the Santiago de Cuba province, and reminded the audience about the more than 60 US students studying medicine on full scholarships at Cuba’s Latin American School of Medicine. To watch a video clip click here

Other panelists included organizer John McAuliff of the Fund for Reconciliation & Development and attorney Robert Muse, who clarified that the specifics of the new regulations have not yet been released. David Parry of Academic Travel Abroad related that for those who qualify, student travel will be the easiest category of permissible travel to maneuver.

Benita Lubic of Transeair Travel spoke about previous experiences with people to people travel under the Clinton administration and Steve Richer of the National Tour Association put the new travel opportunities in a broader Caribbean context and introduced the idea of joint destination travel i.e. spending some time on the beach in a neighboring country on your way home from a “purposeful” stay on the island.