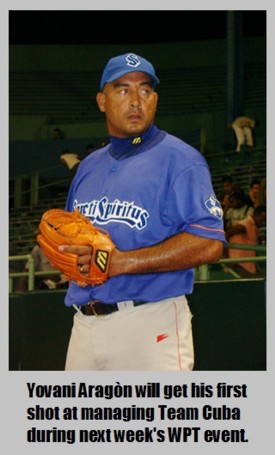 First up is the showcase World Port Tournament in Rotterdam, a four-team event staged on odd-number years since 1985 and a venue where the Cubans have walked off with eight of the previous thirteen titles. This year’s small-field tournament will feature the defending champion Taiwanese (winners over Cuba in a gripping 11-inning “Schiller Rule” title game two summers back), the reigning IBAF World Champion Dutch (gold medal winners over Cuba at the final 2011 IBAF Panama World Cup), a strong Curaçao ball club (featuring a number of talented Dutch League regulars), and a strong Cuban squad that in large part resembles the team sent into action in last the March for a Third Edition of the MLB World Baseball Classic.

Unlike past seasons when Team Cuba rosters have been announced well in advance of tournament play, a veil of secrecy has clouded the Cuban squads chosen for this year’s Rotterdam event and also for the upcoming renewal series in late July with the USA collegians.

Part of the reason has likely been the late finish of this year’s domestic post-season, but it is now apparent that WPT officials also asked the Cuban Federation not to announce details about their squad until after June 25. The Cuban team by agreement would be first revealed to the Dutch media during a special June 25 press conference in Rotterdam as part of the kick-off celebration of this year’s event. While this website was aware of the Cuban roster at a slightly earlier date, we agreed not to reveal it in advance of the “official” announcement on Dutch soil. But the roster has now been made public on at least one other European-based website in advance of the official press release.

Cuba will indeed be well represented in Rotterdam with a ball club that largely mirrors the strong contingent send to Japan earlier this spring for WBC III action under the leadership of Victor Mesa. The starting lineup of position players will in fact be identical to the WBC club with the small exceptions of left-fielder Alfredo Despaigne (recently allowed to spend the summer on the roster of the Campeche Mexican League club), DH Freddie Cepeda (currently sidelined for three months with a hand injury), and spare outfielder Alexei Bell (also currently on the injured list and thus also missing for the second half of National Series action). 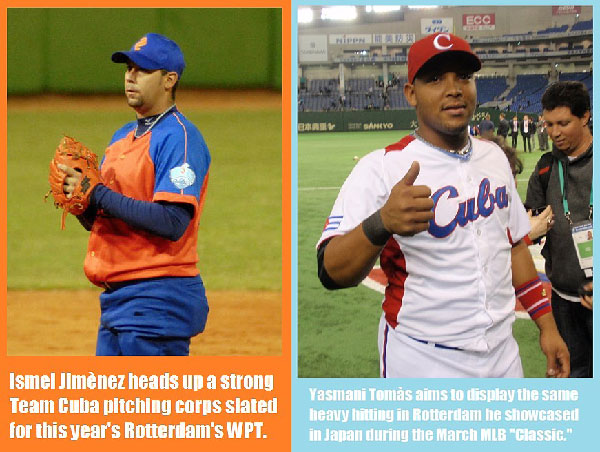 The biggest changes will come on the bench (where rookie manager Yovani Aragón replaces Mesa as manager) and in the pitching corps (where only starters Ismel Jiménez, Odrisamer Despaigne and Wilber Pérez, plus reliever Raciel Iglesias return from the WBC roster). The most notable absences from the normal top Cuba squad (outside of Alfredo Despaigne and Freddie Cepeda) will be ace right-handed pitchers Vladimir García (starter in the final March Tokyo shootout with Holland) and Freddy Asiel Alvarez (fresh off his stunning and record-smashing MVP performance in this year’s National Series playoffs with league champion Villa Clara).

Cuba’s decision to send such a strong contingent to this year’s World Port event would seem to have a double motivation. First and foremost, the absence of any major world championship events this summer means that top Cuban stars will have to be kept sharp with the Rotterdam and North American tours, as well as with a late-summer excursion on tap for Chinese Taipei. Perhaps equally important, it would seem that the Cuban brain trust is bent on a measure of revenge against the Dutch who have captured the last three important head-to-head meetings: a 2-1 thriller in the finale of Panama’s 2011 IBAF World Cup championships plus the pair of Round II Tokyo WBC victories that propelled the Orangeman into the WBC finals in San Francisco. Cuba’s front-liners did handle their Dutch rivals twice in succession at last summer’s Haarlem Baseball Week, but there was much less luster attached to those wins since the Dutch squad faced last summer boasted little more than a trimmed-down roster version of their more potent IBAF World Cup and MLB World Classic squads.

A dark horse in this year’s WPT field might be the Taiwanese, who will return the bulk of a squad that won this event last time around (paced by 2011 MVP second baseman Han Lin) and also boast a handful of stars from their own March WBC outfit. Taiwan did capture one March game on home turf from the very Dutch team that eventually moved on to the WBC finale from the Asian bracket. But Cuba thrashed the Taiwanese WBC club 14-0 in their Round II Tokyo meeting and the Asians are now without their best professional hurler, former Yankee and current Blue Jay right-hander Chien-Ming Wang.

The strongest challenge to a hoped-for ninth Cuban WPT title should in the end come from the home-based Dutch squad that will now be without its top pros (Andrelton Simmons, Jonathan Schoop, Wladimir Balentien and Yander Bogaerts, among others) but nonetheless features several experienced pitchers (Rob Cordemans, Diegomar Markwell, Orlando Yntema and Leon Boyd) who have repeatedly been a stiff thorn in the sides of Cuban batters. Perhaps the biggest change for the Dutch (outside the current absence of their top-line major leaguers and minor leaguers) is found with the team management. Talented long-time pitching coach and Belgium native Steve Janssen has now taken over from American Brian Farley (top man at both the 2011 World Cup and 2012 Haarlem Baseball Week) and also from former big leaguer Hensley Meulens (bench boss for the 2013 WBC) as national team skipper. It’s a safe bet that Janssen will have his veteran pitchers more than ready to face the potent Cuban batting order in what has rapidly become one of international baseball’s most entertaining rivalries.
—–
(*) Peter Bjarkman is author of A History of Cuban Baseball, 1864-2006 (McFarland, 2007) and is widely recognized as a leading authority on Cuban baseball, past and present. He has reported on Cuban League action and the Cuban national team as senior writer for www.BaseballdeCuba.com during the past six-plus years and is currently writing a book on the history of Cuba’s post-revolution national team.