HAVANA TIMES — His hand, covered in blisters and thick veins, runs over the pile of plastic bags. With trembling fingers, he separates one from the bunch and places it on the buyer’s hand. His own hand closes to grab hold of the one-peso coin. He puts the coin away, then casts an empty stare towards the floor, towards the void.

A few feet away, another old man has laid out five mangos over the sidewalk, outside a store entrance. His face and hands are furrowed by deep, coarse wrinkles. In the hardened countenance and eyes, I see the subtle signs of alcohol abuse.

Not far, an old woman has placed a packet of coffee on her lap. “Is it hers, the one from her ration booklet?” I ask myself. But her eyes, lost in an impenetrable, absent gaze, say nothing.

I can’t help but ask myself what stories are hidden in those wrinkles, behind that veil that envelops her completely, what those eyes were like, when, full of life and light, they looked upon a world that throbbed with the wild promise of happiness and success. 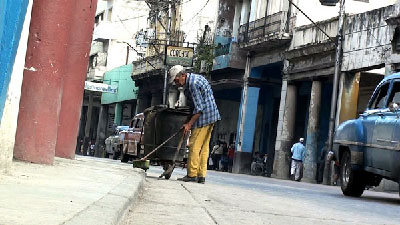 I remember the uncle of a boyfriend I had, a man who died in a tiny, foul-smelling room, eaten away by prostate cancer. His sister would tell me he had been rich before 1959 and that he had squandered his money on women and gambling. I would often think that, faced with the ruins outside and inside his body, he must have felt cheated by life.

When I took out the garbage recently, I saw an old man approach the bin and look at the sordid (and promising) bag of trash with covetous eyes. Out of shame, he waited until I had left before rummaging through it. Since then, and because I often throw out my cat’s droppings with the trash, I close up the plastic bag with a knot, fearing the old man will soil his hands, in the false hope of finding something valuable in my garbage.

When I’m taken aback by the ridiculously high prices of things these days, I remember something my mother says: “money is what we’re eating.” Though it is not exactly a metaphor (because food has always been costly), I grasp the exact sense of her words and the serious tone with which she says them, also with an empty stare. 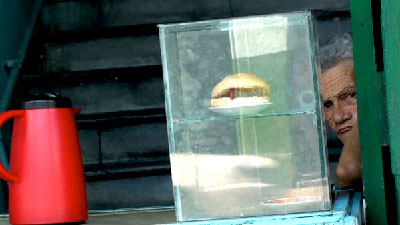 It’s true, money is what we’re eating, because just about all of our earnings are destined to buying food. How, then, are we to explain the plethora of forbidden flavors, the unrelenting sense of not having eaten enough?

What might life be like for those old folk who do not have a son or daughter living in the United States (someone who remembers them, punctually sending a remittance their way), or even here, someone who is tough enough to make his or her way in these rough times, but who still retains a modicum of softness, enough not to forsake their poor old mother or father?

I’ve heard chilling stories about old people’s homes in Cuba, about malnourished bodies, ceaselessly awaiting a meager serving, about wild-herb infusions in the place of a glass of milk, about ruthless mistreatment, particularly of those who are helpless, of those who can’t even control their own bowel movements.

Only those who, being the sole owners of their properties, have been able to bequeath the State their homes, have the privilege of ending up in a fairly agreeable place where they can wait for death.

Many old people who live with their families are also at the mercy of pent-up frustrations, their own and those of others, and often endure the anger of their sons or daughters and the disdain of their grandchildren. Many are locked into a room somewhere, where their personal space, and even their memories, is encroached upon daily. 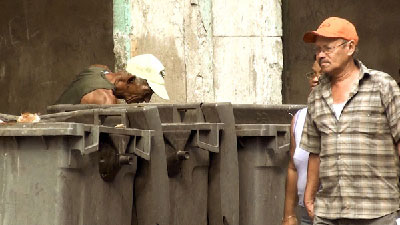 Those who are unable to care for themselves, or have grown senile, are deprived of their measly savings, objects of value, even their “symbolic” pensions, in the places where they are confined.

When I see those bodies marked and wasted by time, I ask myself if there was something in their past (a lack of will, a lack of common sense, the kind of naivety we will also pay for someday, cowardice, the inability to delve deeper, in search of that being that is above time, the body and those festering cesspools we call cities and hope to pass on to future generations), something they could have changed but decided not to.

I ask myself when these people began to trace that diagonal line which tilts more and more towards the vertical, towards a free fall.

When I hear repeated phrases, replies that have nothing to do with my questions, when I see, in the opacity of their empty stares, that they have gone far, to the land of Alzheimer, I realize that that is the place they prefer, a place where they can become oblivious to themselves and find something resembling respite, something resembling happiness.

A place where they no longer have to wait, where they can become so oblivious that nothing, not people’s anger over one’s inevitable bad manners, not the whole ugly, foul-smelling world, can ever harm them again.

2 thoughts on “Cuba: The Advantages of Alzheimer’s”