By Lis Garcia Arango and Rene Camilo Garcia  On Cuba 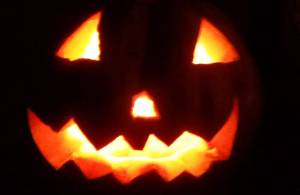 HAVANA TIMES — Many of Cuba’s State-run nightclubs closed up shop on Halloween or forbade people from entering the premises in costume.

The new private bars and alternative venues took in crowds eager to celebrate.

These included places that had thrown Halloween parties last year and had announced this year’s celebration, such as the disco Galaxia, a privately-operated (but State-owned) venue in Matanzas.

“We found out the parties weren’t authorized in Havana and Varadero, which is why we called the Ministry of Culture representative in the province. They told us Halloween wasn’t authorized at the national level,” Yohervis Rodriguez Martinez, the nightclub’s art director, explained.

La Salsa, another nightclub in Matanzas, texted the public informing that they were not to attend in custom a mere hour before the venue opened.

When people asked the reason over the phone, the replied that “no one’s saying why.”

On Thursday, October 29, however, the Camilo Cienfuegos University of Matanzas threw a huge Halloween party.

Students studying English at this university has been organizing a “witch’s night” party for years to improve their language skills. In addition to performing musical numbers in Shakespeare’s tongue and promoting Anglo-Saxon culture, they give out awards for the most creative costumes.

In contrast, the University of Havana (UH) was denied this and many of its students had no choice but to celebrate at costly private bars.

In the words of Juan Carlos Imbert, Chair of the University Students Federation (FEU) at UH, “the FEU decided not to support the activity because it is not a Cuban tradition and did not represent the wishes of the majority of students.”

State nightclubs maintained the same stance, closing their doors on the costumed public.

“Had I gone to Atril (the disco next to the Karl Marx Theater), the same thing that happened to my friends would have happened to me. They didn’t let them in. Then, they went to the nearby Don Cangrejo, and the same thing happened. Many other people went through this,” said Adanys Jose Fleite Alonso, a young researcher at the Center for Molecular Immunology.

“On Saturday, I decided to go to Hogo’s, a private bar in Playa. I was surprised at how packed the place was. It doesn’t usually fill up like that. I’m sure it was because of the many nightclubs that didn’t let people with costumes go in,” Fleite Alonso added.

Though the Halloween spirit was most evident in the higher income areas of the city, such as Vedado or Playa, peripheral neighborhoods such as Cotorro also witnessed successful initiatives.

There, many people gathered at the central square with traditional Halloween costumes, took photos and uploaded them to Facebook to share them with friends in other countries, said Dairon Ivan Miranda Quintero, a university student.

“I went to a party at a friend’s house in Miramar. We knew the decorations are very costly, but, since we wanted to enjoy the Halloween spirit, we put on costumes,” Miranda Quintero commented.

With respect to the government’s attempts to prevent the spread of this foreign tradition in Cuba, the young man said “it is backward and ineffective, because, even if they prohibit it, people will find a way to jump over those walls, as was the case here.”

As in Havana, others in Matanzas kept “their costumes on.” This was what Dayani Ramos Garcia, a self-employed stylist, did. Seeing that the activities at the nightclubs she had planned to go to were cancelled, she stayed home dressed as La Catrina, a popular Mexican death deity. This did not keep her from taking the photos she uploaded to Facebook the next day.

Cultural activity organizers are aware of the frustration that these measures gave rise to in the public. Yohervis Rodriguez Martinez, Galaxia’s art director, acknowledges that “it’s not only the financial aspect. It’s also the message you send out by cancelling less than 24 hours before the start of an activity you’ve been promoting. On Saturday, we were practically flooded with calls from people asking why we’d cancelled, and the worst part is we couldn’t give them an answer because we didn’t have one.”

The tourism industry also reported considerable losses, as several hotels had invested substantial sums in decorations and costumes for Halloween. As the ban was applied to these venues as well, the money spent could not be recovered.

In view of these kinds of decisions, made by a handful of people who disregard the demands of many, one cannot help but ask who answers for these financial losses and public frustration. Many are already wondering whether Cuba will or will not have Halloween next year.

6 thoughts on “Cuba: Too Soon for Halloween?”