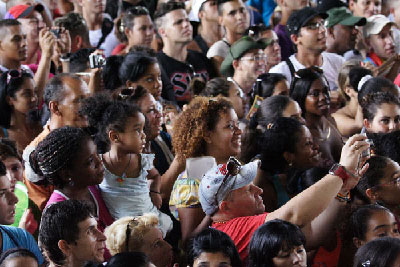 HAVANA TIMES — Though chiefly devoted to celebrating joy and freedom, the gathering held at Havana’s Cuba Pavilion (Pabellon Cuba) every year as part of Cuba’s Campaign against Homophobia activities has more than a fun time to offer.

This past Saturday, a small corner of the pavilion became the venue of the Liberation Theology Forum organized by Cuba’s Martin Luther King Center and the Arnulfo Romero Study Group. Chaired by Pastor Daylin Rufin, the forum holds debates on issues related to sexual diversity.

Jane Hardin, a woman from the southern United States – where, in her words, “there are no gays, or so I thought” and was on hand to participate in Saturday’s parade – was among the invitees who shared their experiences with forum participants.

Hardin told us that, after thirty years of marriage (during which time she had two daughters), “I found myself, got a divorce and moved in with my partner. I’ve been a declared lesbian for eighteen years. It’s never too late to come out.”

I can’t begin to describe how moved I was by this woman’s courage. If it’s difficult for a young woman struggles to overcome social prejudice and family pressures, to assume her sexual orientation, I imagine how difficult it must have been for a married woman with two grown daughters. It wasn’t hard for her daughters to accept it, she later told me, precisely because they are younger.

I tried to hold on to this woman’s words later, when the forum came to a close and people began to leave the pavilion, to return to a world of mockery, prejudice, discrimination, male chauvinism and patriarchal mindsets.

I tried to tell myself that it might not be too late for society as a whole, even when it’s a question of changing deeply-rooted and age-old ways of thinking. But it is hard to do this when I hear and read frightening opinions; some published in Havana Times, like the statement that same-sex marriages should not be permitted because they would lead to the extinction of the human race.

Such statements would be funny were they not ultimately so disheartening. We’ve become so used to the idea of war, so accustomed to famines that ravish entire populations around the globe, that we barely flinch when we see news of these things on the TV. Or we simply ignore such news. We care little about the issue of global warming.

But the idea that a group of people should be able to exercise the right to marry whoever they please is horrifying for us. How many people die, or are killed before they are even born, as a result of wars, natural catastrophes, hunger? How many died in fascist concentration camps? Does anyone seriously believe the world would be a safer place without homosexuals?

Homosexuality does not preclude the wish to start a family. Homosexuality is not responsible for the drop in births Cuba has experienced. Many homosexuals want to make use of artificial insemination to procreate, or adopt children.

Many still affirm that marriage is a religious institution. I think even heterosexuals should start to worry. What I mean to say is that there are some who believe not even they should have the right to marry, that only Christians should be entitled to this. I am terrified by those who invoke God to curtail a person’s rights.

But I am even more bemused by those who affirm that legalizing same-sex marriages and accepting homosexuality as “normal” sets a bad example for young generations. I wonder if they are just as worried by the violence in the movies these young generations are watching. Aren’t they worried about the example these films could be setting for them?

Fears are so rampant that some have expressed they are concerned that homosexuality could become the norm, when a norm is precisely what we should not have for something as personal and intimate as our sexuality.

Months ago, a friend told me that she, her husband and son had watched the American film “If These Walls Could Talk.” The first story in the film is about a couple of old women who have lived together their entire lives. When one of the two dies, her nephew shows up and claims all of her properties, including her house, as her closest relative.

The woman she had spent most of her life with, who is a mere friend before the Law, is left out on the street. At the end of the movie, my friend’s son said: “That’s why we need same-sex marriages.”

Just so you know, my friend’s son is a perfectly heterosexual teenager.

Homophobia, prejudice, blinkered mindsets, these things are very hard to uproot. It takes society years to get rid of them. Not even the Cuban government, which, over the last few years, has undertaken a breakneck campaign aimed at changing (and, if possible, effacing) its former attitude towards homosexuals, cannot change things overnight.

I wonder if those who govern us secretly conserve their prejudices and their intolerance, at a time when the struggle against homophobia seems part and parcel of their attempts to rejuvenate socialism.

Looking back, I do recognize that nothing remotely resembling a campaign of activities against homophobia or a Liberation Theology forum would have been thinkable in the seventies or eighties, not even in the nineties.

This retrospective look, teenagers like my friend’s son and the words Pastor Rufin shared with us during the forum, where she invited us to see God in everything and everyone, to be inclusive, to broaden our circles, leaves me with the hope that it may not be too late for our society to change.