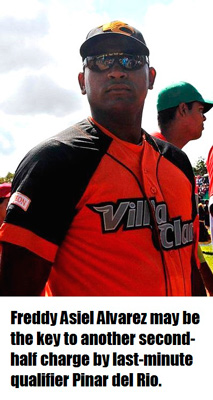 HAVANA TIMES — For the third straight year of split-season league play, Cuba held its nationally televised player dispersal draft on Christmas night, this time with a new wrinkle. For this year’s National Series #54 edition the mid-year selection of reinforcement players from the eight eliminated teams was expanded from five to seven rounds and thus also from the original 40 to a new total of 56 ballplayers.

The novel system represents a controversial departure from Cuba’s long-established traditional structure that found ballplayers performing only for their native provinces and never (before National Series #52 in 2012-13) switching team affiliations in the course of a single championship season. Until recently the Cuban circuit had always prided itself as being a league with no player trades and thus with long-term loyalties forged between clubs, fans, and star athletes. But all that has now changed with approximately 15 percent of the league’s personnel swapping uniforms at the season’s half-way point.

What didn’t change this time around was the heavy preference for pitchers, with only three position players (catchers Yosany Alarcón and Yulexis La Rosa, and infielder Luis Yander La O) among the eight first-round lottery selections. Despite the ongoing tradition of preferential interest in pitching reinforcements, for the first time a hurler (Camagüey ace Norge Luís Ruíz) was the overall top pick (chosen by Holguín). Last winter slugger Freddie Cepeda was the top individual selection (by Artemisa), and in the inaugural December 2012 draft ritual Pinar del Río opted for home run king Alfredo Despaigne. Cepeda ended up once again in Artemisa this time out as a second round pick while his veteran Sancti Spíritus teammates Yunior Mendoza (Matanzas) and Eriel Sánchez (Holguín) were also noteworthy selections. 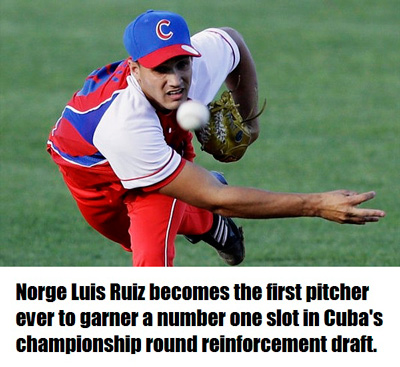 The draft system finds the eight surviving teams picking in reverse order of the current league standings for the initial round, and then reversing order for round two; the final five rounds this season had the picking order selected by a blind draw before each subsequent cycle. The round-by-round top picks with this “luck-of-the-draw” lottery fell to Artemisa (Round 3), Isla de la Juventud (Round 4), again Isla (Round 5), first place Matanzas (Round 6), and finally Isla yet again (Round 7). Among the league’s eliminated also-rans, Las Tunas headed the pack in providing eleven draftees, followed by Villa Clara with ten.

Season play will continue after this weekend’s All-Star Game festivities in Granma Province with the 45-game championship round set to start on Sunday, January 4. The eight-team circuit will continue through March 19, with a three-week hiatus during the final week of January and the first two weeks of February to accommodate Caribbean Series action in San Juan, Puerto Rico. The top four league finishers will enter the best-of-seven semifinal series during the final weekend of March, with the league championship finals on tap for early April.
—–

(*) Peter C. Bjarkman is Senior Writer at BaseballdeCuba.com (since 2007), widely recognized as a leading authority on Cuban baseball history (both pre- and post-revolution) and author of A History of Cuban Baseball, 1864-2006 (2007) among numerous other titles.