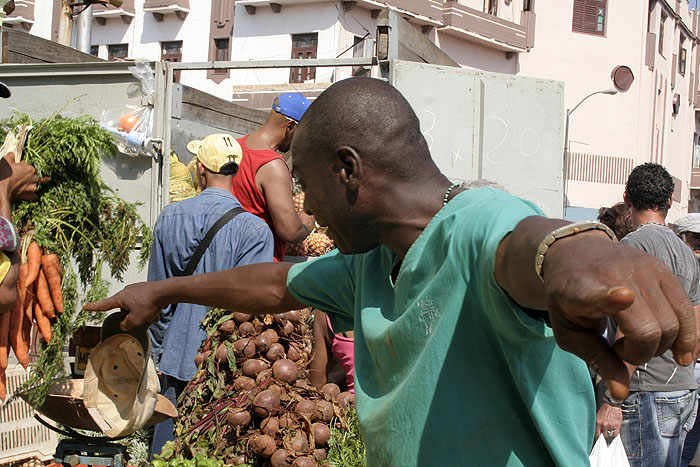 HAVANA TIMES, July 29 (IPS) — “I’m not racist, but at night, if I see three black men coming, I cross the street”; “I have a black friend, but I’d never accept him as my brother-in-law”; “Who me, racist? Not at all! But my daughter marrying a black man.” These are the kinds of comments that can frequently be heard in Cuba, where discrimination of any kind is prohibited by law.

Based on research at the Cuban Institute of Anthropology, the institute head, Pablo Rodríguez, described this as the “I’m not racist, but…” attitude, a common way of proclaiming that one is free of skin color prejudice, before expressing negative attitudes and rejection towards darker-skinned people.

“The Cuban revolution fostered rejection of discrimination, so people react negatively when they are accused of being racist, because they are aware that it’s considered ugly and is frowned on,” University of Havana Professor Esteban Morales told IPS. He added that racism is not necessarily aggressive or characterized by animosity, but is expressed in ways that need to be confronted.

In the view of Roberto Zurbano, an essayist and cultural critic, the problem is exacerbated by silence and by the lack of social debate. There is nowhere to complain of and prosecute the many instances of racial discrimination faced by black people “every three minutes, in the streets, at workplaces or study centers, in the media, on neighborhood street corners, in family arguments and even in bed,” he said.

“It is true that a lot of other issues also need to be discussed in Cuban society, but none of them has undermined the credibility of its social policies as much as this one, in the eyes of a black majority who see the revolution as their victory, their opportunity for self-fulfillment and their utopian horizon,” Zurbano wrote in his essay titled “Doce dificultades para enfrentar al (neo) racismo” (Twelve Difficulties for Challenging (Neo) Racism).

Blacks and people of mixed-race heritage officially make up 34.9 percent of Cuba’s total population of 11.2 million, according to the latest census, carried out in 2002. However, most Cuban academics estimate that between 60 and 70 percent of the population is black or “mulatto”.

Given the likelihood that the issue of racism will be on the agenda at the next national conference of the ruling Communist Party of Cuba (PCC), the Cofradía de la Negritud (CONEG), a civil society association of black people aimed at raising awareness of racial discrimination, set forth a total of 48 concrete proposals for action against discrimination and racial inequality.

“This is our contribution, and we hope it will be taken into account. We are assuming that the problem will almost certainly be discussed at the PCC Conference, and we would like it to be taken up also by the National Assembly (parliament),” Tato Quiñones, one of CONEG’s founders, told IPS.

The CONEG document, which is being circulated by e-mail, expands on demands and concerns raised at monthly meetings organized by CONEG, where experts in different social disciplines hold discussions with members of the public who are attending the meetings.

Several of the group’s proposals have to do with education, and they range from strengthening egalitarian and humanistic values, to introducing studies for teaching staff on “the contribution of black Africans and their descendants to economic progress in the country, and to the forging of the Cuban nationality and identity.”

Another proposal recommends “promoting appropriate coverage of racial issues in the media, from a scientific and multidisciplinary point of view that considers the different aspects of the racial question and fosters constructive debate in existing – and future – scenarios where opinions are shaped.”

The CONEG document also proposes eradicating the taboo on discussing race issues, and promoting a constructive approach to the question. In addition, it advocates fomenting sales of beauty products and services catering to darker-skinned people, as well as re-issuing new editions of the works of the main exponents of Cuban anti-racist thought.

In the view of Morales, a national agenda on the problem must include education as well as a social policy that recognizes and pays special attention to skin color as a factor in social differentiation, and must raise the debate on race issues at all levels of society.

“Racial issues should be discussed in the Cuban Workers’ Federation, the Women’s Federation, the Committees for the Defense of the Revolution and the mass media. On television, the question should be portrayed in soap operas, in order to inform people and make them understand that discrimination exists, because not everyone is willing to accept that it is a problem,” he said.

According to Morales, a leading researcher on race relations in Cuba, there is no immediate solution to the phenomenon of racism, which he says will require a great deal of work. “It isn’t just about raising living standards; it is more complex and more difficult, and involves a change of mentality and the creation of anti-discrimination consciousness,” he said.

Morales said racism must be challenged in a comprehensive way throughout society, without forgetting that expressions of racism occur even among the black or mixed-race population. “Racial discrimination goes beyond poverty, but a special development policy that takes skin color into account would go a long way toward solving it,” he said.

Zurbano, CONEG and Morales all stressed the triple burden of prejudice that weighs on darker-skinned Cuban women.

“Black women are the most vulnerable, because they are discriminated against on the grounds of skin color, poverty, and their sex. They are also more exposed to machismo and domestic violence,” Morales pointed out.

Civil society sources and some authorities interviewed by IPS gave the impression that discrimination on the grounds of race, and legislative bills supporting the freedom to choose one’s gender identity and sexual preferences, might well be on the agenda of the PCC Conference scheduled for April 2012.

However, in his speech on Jul. 26, Revolution Day – commemorating the 1953 assault on the Moncada barracks, the first armed action of the Cuban revolution – Vice President José Ramón Machado Ventura did not mention these issues as being included on the agenda for the important party conference.

7 thoughts on “Cubans Aren’t Racist, But…”