HAVANA TIMES – “It’s been a horror movie to get here,” George Zamora tells me while he remembers his 13-month long journey from Cuba. Today, he lives outside on the Ysleta-Zaragoza International Bridge, which connects Ciudad Jerez with El Paso, Texas. He stays there with the hope that he will be able to request political asylum in the US.

Ciudad Jerez is a Mexican city that shares its border with the US and the main source of its residents’ income comes from large scale manufacturing for multinational corporations. A floating population is very common in this desert land, which is nearly almost entirely made up of Mexican migrants from other parts of the country, people who have come with the hope of finding work in this area where wages are a lot higher than in other parts.

A city that heavily depends on its trade with the US, it has five border crossings: Santa Teresa, Paso del Norte, Cordova-Americas, Ysleta-Zaragoza and Tornillo, which allow both vehicles and pedestrians to move between both countries. The Santa Teresa and Tornillo crossings are located outside the urban area, while the others are found at different points within the city.

George tells me how he used to own a paladar restaurant in Cuba, but he decided to leave because his ideology was different to the government’s. Now, he covers himself with the blanket that a Mexican woman gave him, and he sips his morning coffee. “I want to go somewhere in life and that’s why I will stay on this bridge until both my wife and I are granted entry into the United States.”

His odyssey began with a flight heading to Guyana on September 2017. Then, he traveled to Brazil by bus. He worked at several jobs in the South American country, he even collected garbage on the street, so as to save up more money and reach the Mexican border faster and then cross over to the US.

He says that he was beaten and robbed by local police on his journey, especially in Panama and Costa Rica, countries where he lost all of the money he had saved up. He worked in different places to be able to carry on.

“The hardest thing about the trip were the seven days we spent in the Colombian jungle, we were lost, we walked for hours on end without food,” he recalls.

Between solidarity and indifference

Ten kilometers away from George and his wife, on another of Ciudad Jerez’s international bridges, Felipe has been waiting seven days for the US government to allow him to reach the sentry box to request political asylum.

This 26-year-old Cuba was living in Cienfuegos and it took him eight months to reach the border. Actually, only 20 footsteps stand between him and his goal; the problem: two U.S. Customs and Border Protection (CBP) agents armed with assualt rifles, stop him from stepping foot on US soil.

His journey here hasn’t been easy either, but he says that the most difficult thing has been living here, not knowing what’s going to happen and with all of the desperation that this involves.

The dry cold in the Mexican desert has been his unrelenting enemy. In the early morning, temperatures on the concrete bridge with chain-link fencing that he finds himself on can drop to five degrees Celsius. The cold air makes your limbs go numb and sits in your lungs. Plus, they are in the middle of the coming and going of passers-by.

Thousands of Ciudad Juarez residents cross the pedestrian border crossing on foot, where Cubans, Salvadorans, Hondurans, Guatemalans… are waiting. Some of them help out and give them hot drinks, coats and money; others just walk past with indifference.

In this border area, crossing over at border points forms part of everyday life. US citizens who live in the Mexican city go to the US every day to study and work; Mexicans who have a student visa travel to El Paso city in the morning and come back in the evening. Plus, many of the mid and high-level managers of textile factories live in El Paso, but their work is in Juarez.

The empathy of Juarez citizens and civil associations has helped to make migrants’ stay at this international border crossing a little easier. There are currently 30 Cubans here. There are also local Red Cross volunteers who check that they are in good enough health to stay on there, making sure that it doesn’t pose a threat to their lives.

Hot coffee is handed out every day at 5 AM and everyone drinks it, even children, as it allows them to keep their body temperature up.

Living with each other on a daily basis has led them to organize themselves. They all have a number, which is their place in the line for when they are finally allowed to access the US immigration control office.

Their future in the border guards’ hands

Andrea is another Cuban; she waited on the Paso del Norte bridge for three days. The 19-year-old woman from Holguin (who also refused to disclose her surname like Felipe) said that she was studying the second semester of her Law degree, but she decided to look for a way to immigrate because of a lack of options in her country, her sights set on the US.

“I saved for years so I could get here and I’m very close,” the student remarked.

By the time I was finishing off this article, Andrea had been granted entry to request political asylum, which means she’s probably in a detention center, waiting for a hearing which could take months.

The detention center in El Paso, Texas is like a huge warehouse, fenced off with chain-link fencing. Immigrants can stay there indefinitely. They sleep, live and eat like prisoners, but they don’t live in individual cells, they live in communal spaces where approximately 40 immigrants have small individual beds and thin blankets, which seem to be made out of aluminum foil. Fifty kilometers to the east, there is another center which only holds children, but in similar conditions.

During their stay on Ciudad Juarez’s international bridges, immigrants have experienced the hostility of US border control authorities, who hold riot drills a few meters away from where they are waiting. They do at least two drills a day.

They have seen how dozens of agents (armed with assault rifles, truncheons, tear gas and shields) practice tactical formations to deal with a riot, in case it ever came to it.

“It’s horrific and it does scare me, but I will continue to wait my turn,” Felipe says while he plays with his hand that has the number 22 marked on it. 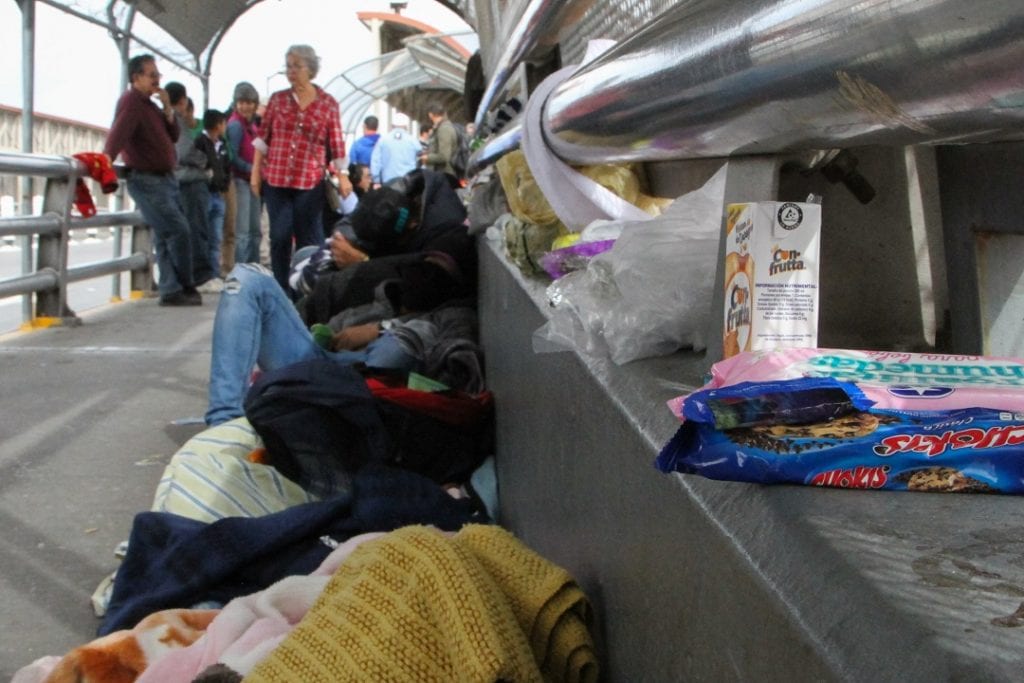 Between midnight and 3 AM, the group gets their hopes up, as immigration officials sometimes go up to the bridges and let some people through to begin their political asylum application.

Once, three families from Cuba, Honduras and Russia went through. Another night, people who were traveling with children, as well as unaccompanied women, were allowed through. Men traveling alone have been falling behind, but they still don’t lose hope that they will soon be granted entry.

In spite of it being normal to see immigrants on the Juarez-El Paso border, it’s the first time that they are setting up camp on these international bridges for days on end, waiting for the US authorities to grant them permission to apply for political asylum. More and more people have been coming and there are now over 200 people living at this Mexican state’s border crossings. Media from other border cities such as Matamoros, Reynosa and Nuevo Laredo, Tamaulipas state, have also reported that there are crowds of immigrants at their border crossings, Cubans included.

Cubans have lost their privileges

Before Obama revoked the Wet Foot/Dry Foot policy on January 12, 2017, Cubans who used to reach these border points and requested entry to the US, were granted direct entry: parole, and most of them didn’t used to stay at detention centers, unless they had a criminal record on the island.

After that happened, Cubans who requested political asylum were processed at some border control offices, but they had to be detained, just like any other immigrant who wanted to stay on US soil without the legal documentation this government requires. After being held for up to six months, some of them were released with an order to be supervised and they began their political asylum application process, as long as they had proof that they were being persecuted by the Cuban government.