HAVANA TIMES — Some 500 members and supporters of Cuba’s LGBT community paraded on Saturday morning along the busy 23rd Street in Havana in the now traditional anti-homophobia campaign calling for respect for diversity and rejection of sexual prejudice.

The march took place to the beat of the popular Cuban sound of the “conga” with trumpets and drums. Many in the crowd waved Cuban and multicolored rainbow flags.

This is the peak visibility in the Cuban Campaign Against Homophobia, held here since 2008, always around May 17. 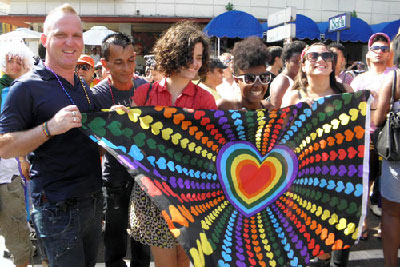 At the start of the activity, Mariela Castro, director of the National Center for Sex Education (Cenesex), called for dialogue between the Cuban population to eradicate prejudice in families.

This year’s parade was especially focused on the family, one of “the most vulnerable areas in the rights of LGBT people, lesbians, gays, bisexuals and transgender people,” Castro told reporters during the parade.

Castro, who is also a member of the Cuban parliament, emphasized the need to approve changes to the Family Code, including the rights of sexual orientation, gender identity and recognition to same-sex couples.

The debate has been suspended for years due to the strong disputes generated in Cuban society, but Mariela remains optimistic that the parliament will take up the issue again soon, noted DPA news.

“The hardest part is the time it takes to overcome prejudice, but I think conditions are improving,” said the daughter of Cuban President Raul Castro.

The march is part of the activities of the VI Cuban Campaign Against Homophobia, taking place this year from May 7-31, featuring discussions, lectures, photo exhibitions, educational activities and a sports festival.