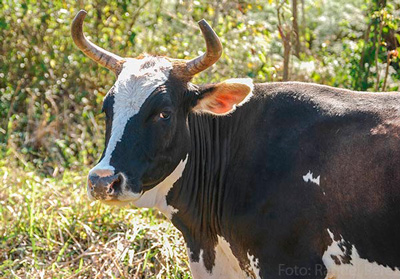 HAVANA TIMES — I’ve just had the pleasure of watching Cuban filmmaker Enrique Colina’s documentary on Ubre Blanca (“White Udder”), the Cuban record-breaking cow that produced over 110 liters of milk in a single day – an animal so prodigious it managed to eclipse the United States’ best milk producer.

Given the political and ideological implications of this feat, Ubre Blanca (1972-1985) was given protection against potential acts of sabotage through rigorous security measures. A control post was set up at the entrance to the dairy farm and only authorized personnel, whose names were kept on a list, were allowed to enter the premises.

That said, the prodigious cow was paid a visit by nearly all foreign politicians who travelled to Cuba. In fact, 26 foreign journalists were invited to document the milking process and report on the achievements of Cuba’s livestock industry to the world.

The affection Cuban that farmers felt towards the cow was such that, on occasion, they would feed her oranges. The Cuban press, for its part, insisted that the cow’s massive milk yield was merely the tip of the iceberg in a country that was producing 1 million liters of milk every day.

The whole affair reached such proportions that the dairy farmers had the obligation of reporting on Ubre Blanca’s milk production to the country’s top leadership on a daily basis. And it was said at the time that, in less than a year, Cuba would become one of the countries that exported beef to Europe.

Shortly after watching the film, I opened up Granma, the periodical of Cuba’s Communist Party, and one of its articles returned me to reality in one fell swoop. There, I read that, in the province of Villa Clara, more than 18,000 heads of cattle died of hunger and thirst and an additional 5,000 were stolen last year alone.

Most of these cows and calves died because “a strategy capable of guaranteeing that bovine cattle is fed during droughts is lacking.” My colleagues at Granma add that, in addition, there’s an indeterminate number of “missing” bulls – animals that simply disappeared.

It is said that killing a cow illegally in Cuba can land a person in jail for 20 years. If this is true, high agriculture officials, whose failure to plan caused the death of so many animals last year, would have to be confined for 400 thousand years.

Instead of handing themselves over to justice, however, they steer the shot away from them and towards farmers, insinuating these use cow feed to fatten pigs and breed poultry (though they acknowledge such an accusation is something “few have been able to demonstrate.”)

What has been demonstrated by a study conducted by experts from Villa Clara’s Provincial Agriculture Bureau is that “the lack of water, sugar cane and king grass constitutes the chief cause of 60% of cattle deaths in the region.”

This is by no means a new development. In 2011, farmers failed to deliver “30 million liters of milk, an incident that forced to the State to apportion an additional 14 million dollars to import the powder milk the country needs,” the most official of Cuban newspapers reports.

If the same schemes and methods are repeated and the same managers are entrusted to rectify this economic disaster, then it is very likely we will end up where we started or an even worse place (in Villa Clara, 1,140 more cows than in 2012 died in 2013).

Such combination of measures entails, in addition to changing “everything” that must be changed, replacing “everyone” who needs to be replaced. This would demonstrate that the revolution’s commitment is with the people alone, as the Cuban president proclaimed in January.

The difficulties involved in breeding cattle in a tropical country with scarce water and grass resources are immense, but letting cattle die of hunger and thirst is unforgivable, given the nutritional needs average Cubans have and the money the country invests on imports.

A dairy farmer told me that putting together a healthy herd of cattle can take years, but that destroying it can take a few days. We could also say that developing a good livestock industry requires the hard work of thousands of farmers, but that, to ruin it, a handful of inept officials suffice.
—–
(*) An HT translation of the original published in Spanish by BBC Mundo.

8 thoughts on “Cuba’s Prodigious Cow and its Hungry Sisters”