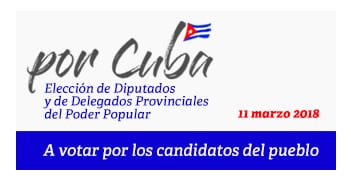 HAVANA TIMES – Cuba held its second phase of General Elections on Sunday with a massive turnout interpreted by the government as overwhelming support for the country’s leaders their policies and the Communist Party.

Granma, the official newspaper, called the elections autonomous and extremely democratic, presented as far superior to other countries that allow different political parties and campaigning.

For the Cuban leaders the key reason to vote is to support the government and reject the pretensions of the United States to destroy the Revolution.

The following is the essence of the article appearing today in Granma.

A Unique and Extraordinarily Democratic System

The strengthening of ties with the population and the struggle against the economic and political harassment to which Cuba is subjected by the United States government, are essential tasks of the men and women who make up the new Cuban Parliament and the Provincial Assemblies of Popular Power, said Jose Ramon Machado Ventura, the 87-year-old second secretary of the Central Committee of the Party and vice president of the Councils of State and Ministers, after exercising his vote this Sunday in Guantanamo.

Accompanied by Denny Legra Azahares, member of the Central Committee and first secretary of the Party in Guantanamo, Machado praised the educational level and political preparation of the 605 candidates for a seat in the National Assembly as well as the Provincial Assemblies.  He emphasized their proven commitment to serve the people, by virtue of the responsibilities they occupy in the Party and the State.

Voting in the city of Santa Clara was the first vice president Miguel Diaz-Canel. He stressed “the greatness and transparency of this process as an everyday fact in Cuba, which not all peoples of the world are able to enjoy.”

Diaz-Canel added, “the government we are electing today will be a government of the people, who will have to focus on the bond with the people and the solution of the problems identified, as the Revolution has always defended.”

The man considered to have the best chance of being selected to be the next Cuban president also referred to the ideological challenges that represent the fight against what he called “the hegemony of pseudo-cultural values that others try to impose on us and we must draw from our essences, convictions and values; as well as the updating of our economic-social model.”

Another leader featured voting by Granma was National Assembly president Esteban Lazo, 74, “who extolled how the process of preparation for these elections mobilized more than 200,000 electoral authorities.” Lazo voted in the Havana municipality of Arroyo Naranjo.

“Today is one of those decisive days to defend what we have, said Lazo, and noted that Fidel was the inspiration behind this voting system. “There should not be a patriot, a revolutionary, a grateful person who, on a day like today, does not remember Fidel.”

Foreign Minister Bruno Rodríguez Parrilla, voted in the Havana municipality of Playa. “He highlighted our revolutionary civic nature and loyalty to the traditions and the Revolution”.

Rodríguez noted that “anyone who is aware of our electoral process and looks at it with minimally objective eyes will have to recognize that they are very unique, very Cuban elections, and that it is an extraordinarily democratic way of doing it.”

A model, he stressed, “without the participation of transnational interests, without campaign money, without politicking, without deception or populism, without using technology to manipulate the vote, without fierce struggles between candidates, without encouraging fragmentation, division and hate.”

Rodriguez further called the process “a genuine expression of the will of the people, of how they choose their representatives with vocation of service to the people, in pursuit of an ideal of a nation that makes Cuban socialism more efficient, democratic and just.