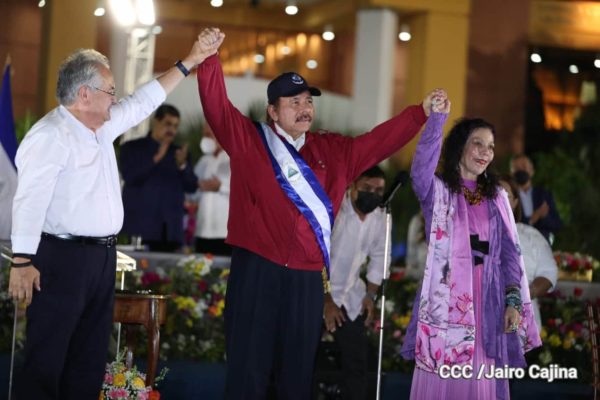 Ortega assumed the presidency on January 10th, amid international isolation. While turning a deaf ear to the clamor to free the more than 160 political prisoners, he’s made no move to lift the police state.

HAVANA TIMES – On January 10, Daniel Ortega was officially sworn in for his fourth consecutive presidential mandate, and fifth total term as president. For the second time, his wife, Rosario Murillo, was also sworn is as vice president. The inauguration ceremony found Ortega and his regime more isolated than ever. Without the backing of much of the international community and amid a socio-political crisis. The Nicaraguan ruler promised to return to the level of economic growth that the country had previous to 2018.

Ortega expressed at the conclusion of his speech in Managua’s Plaza of the Revolution that Nicaragua  “is a country that’s advancing in its economic growth and, logically, must continue struggling. Our goal is to offer continuity to the progress we were making until April 2018. Let’s have a clean slate. Let’s go forward, dear Nicaraguan brothers and sisters, building peace to combat poverty.”

Along the same lines, Rosario Murillo referred to the 2018 protests as “a terrible episode”, promoted by “reactionaries” who sent the country into a decline from which she hopes it can recover. “In our alliance, model, we all participated. They [the business community] profited, created work, and contributed something to the growth we had. But then came the debacle: selfishness, greed and the attempt to return to a terrible past,” Murillo stated.

Currently, Ortega and Murillo are holding more than 160 political prisoners, among them some of the same businesspeople who participated in the regime’s former consensus model. These business leaders broke with the Executive following the April 2018 killings and demanded free elections. Relatives of the prisoners, human rights organizations, and much of the international community continue demanding their immediate release, but they’ve been ignored by Ortega. Instead, he spoke of those who were arrested in the US, following the January 6, 2021 protests in the Capitol building.

“There are 700 political prisoners (in the US) waiting to be set free. There, they take a hard line against them. Ah! While on the other side, they launch terrorist activities, they organize against fraternal countries such as Venezuela,” accused the Nicaraguan ruler. “How would the Yankees have reacted if they were faced with terrorist acts like the ones we faced in 2018? To them, [the Nicaraguan protests] weren’t terrorist acts. To them, those who killed more than 40 police and over a hundred – nearly two hundred – others, and who paralyzed the country for several months were just citizens,” Ortega added.

Ortega asserted that the resumption of diplomatic relations with China will allow them to sign cooperation and trade agreements that will “multiply” the Nicaraguan people’s capabilities, so they can “advance more rapidly”.

At the same time, Ortega complained about the sanctions imposed by the US and the EU. On the eve of his new swearing-in ceremony, these bodies approved new sanctions targeting high officials of the Nicaraguan army’s public investment funds, the postal and telecommunications agency, and the Nicaraguan mining company. They also imposed new sanctions on two of the ruling couple’s children, who also serve in the regime: Camila Ortega Murillo and Laureano Ortega Murillo.

The governments of the United Kingdom and Canada warned that they, too, might invoke new measures against the “oppressive regime”. They applauded the new sanctions announced by the EU and the US, aimed at pressuring the Nicaraguan authorities to “restore democracy and respect human rights”.

Ortega responded: “Cowards! Cowards! Those who prey on families in that way – not only on Nicaraguan families, but on the families of our brothers in other countries, like the Cuban people, who are subjected to brutal sanctions, or our brothers, the Venezuelans, who are also living under brutal sanctions. They even launched an assassination attempt against our brother Nicolas [Maduro]. We don’t forget that.”

The Nicaraguan ruler also emphasized the “courage” of Honduran president Hernandez in attending his inauguration act, after he had received boo’s and cries of “JOH out!”, when he was presented to the public.

“It takes courage to be present here in Nicaragua,” stated Ortega.

Agreement for political consultations with China

Previous to the inauguration ceremony, Ortega and Murillo met with a delegation from the People’s Republic of China, headed by Cao Jianming, vice president of China’s Permanent Committee in the National Assembly. Four cooperation agreements were signed at this meeting, among them a political consultation agreement.

The agreement was signed by Laureano Ortega, presidential advisor and son of the governing couple, and by the Chinese representatives. It’s officially titled: “Memorandum of Understanding between the Foreign Affairs Ministry of the People’s Republic of China and the Foreign Affairs Ministry of the Republic of Nicaragua, for the establishment of a mechanism for political consultation.” Beyond the title, the Nicaraguan executive branch offered no further details.

Also signed was a Framework for Cooperation agreement and a “memorandum of understanding regarding cooperation (…) for the XXI century silk road economic belt and the silk road maritime route.” Finally, an agreement was signed regarding the mutual exoneration of visas for those holding diplomatic passports.

The signing of these agreements came a month after Nicaragua reestablished relations with China after breaking off diplomatic ties with Taiwan, which the Asian giant considers merely a “rebellious province.”

“President Xi Jinping views with the utmost importance the development of relations with Nicaraguans and appreciates your decision to reestablish diplomatic relations with the People’s Republic of China based on the principle of only one China. I congratulate you on your reelection as president of the Nicaraguan Republic, and I welcome you to visit China at an opportune moment,” Cao declared.

Meanwhile, Ortega stated: “We’ve always been totally clear and convinced that only one China exists.” He added that the meeting ratified “the principles of socialism, with our particularities, and of Marxist-Leninist thought as the guide, plus the thinking of the great leaders Mao Zedong, Deng Xiaoping, and that of president Xi Jinping.”

One thought on “Daniel Ortega Wants “a Clean Slate”, over the 2018 Killings”