HAVANA TIMES — A young woman entered the stage carrying two actors on piggy-back. “Ladies and gentlemen, our donkey has died,” they said.

As of that moment, the morning of Saturday, March 7 was marked by excitement and humor at Old Havana’s La Proa* Theater.

“Ivan, where is my nose?” Kovaliev asks his butler. At the other end of town, a barber finds the lost nasal appendage in a small bun. The nose, a symbol of social status and pride, gradually takes on a life of its own and secures authority. Its former “owner”, on the other hand, becomes ever gloomier and withdrawn, losing his job, his girlfriend and his glory.

This modern adaptation of Gogol’s story of the same name, staged by the Danish theater company MishMash, made all members of the audience laugh and think, regardless of their age. A simple stage without any set décor made the performance of the actors stand out all the more. These displayed great imagination and admirable dexterity in their use of mime routines and acrobatics, imitating tables, horses, mirrors and dogs and switching from one character to another with remarkable skill. 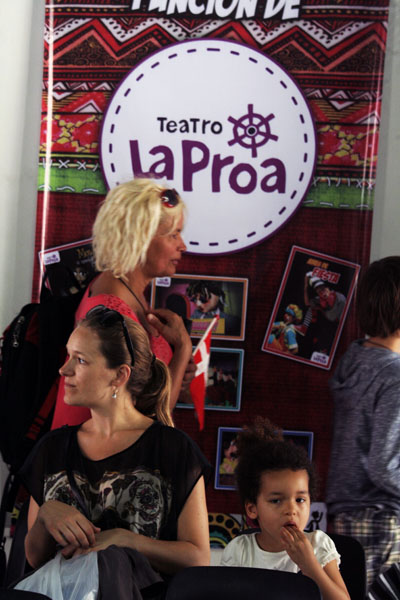 Kovaliev recovers his nose, caught at the border while trying to leave the country. After many attempts to glue, stitch or hammer the nose back in place, the character finally managed to set it in place and became as snobbish and “powerful” as before.

“Be careful where you stick your nose,” the three actors told the audience as the laughter died down, and they left the stage as they entered it: without a donkey to make the trip back.
—–
* Note: The small space that welcomed the play’s audience is the venue of the La Proa theater company, located on 166 San Ignacio Street, between Obispo and Obrapia streets (on the second floor of Havana’s Centro de Teatro). An important activity, where the winners of a peculiar toys contest named Regalo para un amigo (“A Gift for a Friend”), is scheduled to take place there on April 4. Children who participate in this activity will be asked to put together a craft toy (a doll, car, sports implement, board game, etc.) that will later be donated to kindergartens, primary schools for children with special learning needs and orphanages. The registration deadline is March 27. For more information, call 7862 3298 and 7862 9650.