HAVANA TIMES – Between May 23rd and 26th, citizens of 27 or 28 European countries, or member states, will vote for a new European Parliament. We hear more than usual this year about these elections due to confusion over how the United Kingdom (UK) will deal with them. Brexit or No Brexit?

Let’s forget Brexit for now, to learn more about the EU and its parliamentary elections held every five years. We have no equivalent anywhere near North America.

The European Union began in 1957 with a core group of six states. It expanded steadily and most states began using the Euro single currency in 2001. The EU’s governmental and administrative centers are in Brussels, Belgium and Strasbourg, France; both somewhat in the geographic center of all member states.

Imagine the U.S., Canada, Mexico and 20 to 25 other American countries agreeing to such a unified government, and than successfully implementing it! Although we constantly hear of EU problems and defeats, I admire the fact that so many separate states could agree on anything so complex and work on it for over 60 years as members increased and issues became more difficult. A democratic national government and a free market are required in all member states. International subjects are agreed on and implemented by the Union’s European Parliament and the Council of the European Union.

As in the U.S. Congress, both of these European bodies or chambers must agree in order to move an agenda forward. The 28 person Council has a member appointed by each state government, while 751 Members of European Parliament (MEP) are elected by all the voting citizens of all member states every five years. Which is where we are now.

Parliamentary representation is generally based on a member state’s population. Larger states have more representation, but smaller states receive more MEP’s per 100,000 citizens than do larger states, to offset domination by size. For example, Slovenia has 8 members representing a little over 2 million citizens, or one for every 250,000, while France and Germany vote in 79 and 96 MEP’s, each one representing over 800,000 citizens.

How will a country like France choose 79 MEP’s to send to Brussels this year? I thought it could be done by dividing the country into 79 regions, with each one electing one MEP. Too simple. Since the EU is about each member state working with neighbors for a more peaceful union, having 751 locally oriented MEP’s might lose the forest in the trees. The idea is to have all of an individual state’s MEP’s work together for their country and political party, not each one for their home region.

Any party or political group wishing to put forward a slate of MEP’s may do so in these elections every five years. A French voter can only vote for one of these party lists, not for individual MEP’s, nor for half of one party list and half of another.

So each party must present a full “list” of 79 potential seat holders in case by some miracle all French voters choose the same party list. If so, all 79 members of that list would go to Brussels.  Submission of party lists for the ballot closes May 1. There are already 18 parties declaring their lists will be ready. Each list must balance male and female candidates equally. Active campaigning is only allowed for several weeks before the vote. These rules are the same for all participating member countries.

Imagine if instead of voting for your favorite local state rep and senator, you could only vote for one entire party. Sounds like regressive “party politics” doesn’t it? But if you had to vote for all 151 State House members individually, you would not go through such a long list, choosing each one using personal criteria. 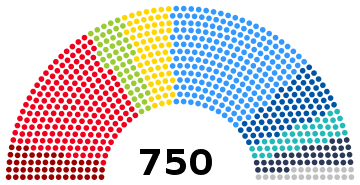 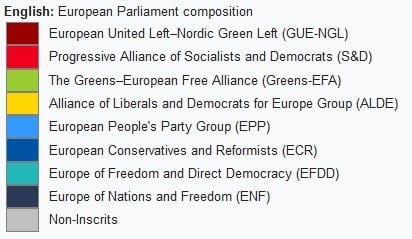 Likewise, no one in France wants to pick and choose 79 separate MEP’s out of hundred’s of choices. But every French voter has the right and responsibility to choose their favorite and complete Euro MEP group from one party. All larger EU member states choose MEP’s in this manner; only a few small ones use alternate methods.

A party organizes their list from top to bottom. If only one person is elected from a list, (s)he comes from the top, or head of that list. Remaining candidates are picked going further down the list, alternating between men and women, depending how many persons are voted in from each party.

No one at the bottom of a list will go to Brussels, but the “head of the list” may just. Many candidates on the bottom of lists are unknown nationally and simply fill places so their party has the required 79. Lists are known by their head name, or their party, such as the Macron list or the LREM list, an abbreviation for his party, The Republic on the March.

This French national vote by about 47,000,000 persons is always split between many parties. No one party takes anywhere near all 79 seats. Votes are tallied and split by the proportion in which people voted nationally, but a party needs at least 5% of the total vote in order to win any MEP‘s.

If 10% of French votes choose the Green Ecology Party list, then 10% of their 79 person list, or seven Greens go to Brussels. This partisan sounding system actually ends up electing a diverse group of MEP’s to represent France.  The 2014 elections, with limited turnout, sent representatives of six different French party lists to the EU. Making national choices by party may thus bring more open and diverse participation than many local elections.

Once elected MEP’s start work in Brussels, they do not organize themselves nor are they seated by member state. Party members from each country organize with like-minded parties from other states into groups that resemble pan European parties but they do not always follow national party lines.

To qualify as a group or voting block in the EU Parliament, like-minded MEP’s must number at least 25 and represent a minimum of ¼ of member states. Any individuals without party or in a group too small to qualify fall into the “un-aligned” group, as do non-party representatives in the Maine Legislature. The current EU parliament has eight qualified groups from far left to far right politics, plus the non-aligned.

MEP’s are actually seated in the large semi-circular chamber by group, with the most left leaning to the President’s left and moving across the political spectrum and the chamber towards the right. Colors used to represent the groups in any plan or map start with the most red to the left and move through green and a spectrum of colors ending with the most blue or conservative groups on the far right.

In the US we chose “red” and “blue” states from an opposite perspective. Far left and Communist groups in Europe have always been associated with red, at least since the Russian revolution.

Held in between national elections, these EU Parliamentary votes give the world a good look at where each country’s politics are heading, as well as a snapshot of tendencies throughout the 28 member union.

So in addition to changing representation throughout the EU Parliament, these cyclical events begin the countdowns to each member state’s next national vote, as do our national midterm elections. That is why so much European news is following this campaign as we approach May 23.

Back briefly to Brexit! The UK’s continued delay in approving a withdrawal plan puts them in the position of still being part of the EU during its Parliamentary elections, which is not where anyone wanted to be at this point.

If by another miracle, British Parliament approves an exit plan by early May, that is also confirmed by the EU Council, who already said their plan is final, it is possible that the UK would not vote for Euro MEP’s this year.

But if Brits remain in their current holding pattern, which has been extended to Halloween, UK voters, as in other member states, will have to vote in a slate of MEP’s to go to the EU Parliament, even if the UK later leaves the union. It should be interesting!