He insists that the peaceful demonstrations represent a “coup d’état” against his government.

He denies the existence of paramilitary forces, political prisoners, torture, corruption and nepotism, while he once again talks about the inter-oceanic canal.

HAVANA TIMES – In late August and early September, Comandante Daniel Ortega embarked on an unprecedented round of interviews with the international media.  In these interviews, he repeats a number of false statements about the repression his regime has spearheaded since the national revolt began in April. He reiterates his denials of such repression, despite documented evidence of over 320 confirmed deaths and hundreds of political prisoners.

In a September 4th interview with the Spanish news agency EFE, Ortega also insisted that the protests against his government were a “criminal coup attempt” which he claimed was orchestrated by the United States to remove him from the seat of power that he’s held for over a decade.

After denying any responsibility for the deaths of protesters and affirming that his government hasn’t repressed the protests, he went on to negate the existence of any paramilitary forces operating under his command, or political prisoners or tortures.

[On September 26, Ortega has asked to address the UN Assembly General to offer his version of the socio-political crisis that the country is experiencing. It’s been eleven years since he last appeared before that body.]

Assuming that Ortega is planning to repeat many of the same assertions he made during his interviews with the foreign media, Confidencial did a fact-check of Ortega’s statements during the September 4th EFE interview.  We discovered at least 20 lies in that hour-long appearance. Here are the 10 most significant ones:

1- There are no paramilitary forces under Sandinista command

Ortega: “The only paramilitary forces that have existed in Nicaragua are those [bands] that were formed after 2007 and have committed an continue to commit a number of crimes.”

FALSE: Ortega’s statement is doubly false. In earlier interviews with Fox News, CNN in Spanish, Euronews and other major news chains, the leader has already contradicted himself about these groups that operate openly, with their faces covered and brandishing weapons. There’s an abundance of documented evidence showing them operating hand-in-hand with the National Police on a great number of occasions, including the government’s so-called “clean-up operation” to remove the protestor’s roadblocks.

Ortega first stated, as he indicates here, that the paramilitary forces were “right-wing groups.” Later, he’s claimed that they’re sympathizers of the Sandinista Front who’ve organized to defend themselves. His government has also accused them of being armed groups financed by the Sandinista Renewal Movement [an opposition party formed of dissenting former Sandinistas] or “United States imperialism.” On yet other occasions he’s identified them as “voluntary police.”

In addition, in this interview he speaks of the paramilitaries operating as illegal armed bands since 2007. However, until this moment his government had denied the presence of armed political groups in Nicaragua. In 2017, an investigation carried out by Confidencial revealed that between February 2011 and February 2017 at least 22 members of armed groups were executed by the Army, demonstrating an exceptionally effective lethal policy. Nonetheless, the government and the army alleged that they were groups of “common criminals” linked to cattle rustling, murders, robbery and drug trafficking.

2- The massacre at the May 30th Mother’s Day march

Ortega: “The attack on the May 30th march is a great lie. What occurred there was an armed assault on the part of the protesters, leveled against the other (counter) march that was headed towards Bolivar Avenue (in Managua)”.

FALSE: On May 30, hundreds of thousands of Nicaraguans mobilized in Managua to show their solidarity with the mothers of those killed by the Ortega massacre [in previous demonstrations]. The mobilization – called “the mother of all marches” – was attacked at 4:45 pm by the police, while paramilitaries shot at it from the National Stadium. In all, there were 11 citizens killed that day in Managua.

Ortega: “To them, [the OAS, the IACHR, the UN based OHCHR] the only deaths here have been those that the (national) human rights organizations and their allied political groups have identified. For them, the 22 dead police officials don’t exist, nor those civilian fellow Sandinistas who were burned.”

In a chapter devoted to “Human Rights abuses committed by anti-government demonstrators,” the OHCHR specifies: “the stated authorities have proportioned detailed data regarding the deaths and wounded among the members of the Police force and militants of the Sandinista party.” Among these are the report of the 22 police agents killed between April 19 and July 25. It also notes that seven police died in attacks launched against the police stations in Mulukuku (North Caribbean region) and Morrito (Rio San Juan department).

Ortega: “We don’t have any political prisoners. Those who are detained have been arrested for crimes committed against the people, and they’re being subjected to the corresponding legal processes. No one is in jail for their ideas and their political activism”

FALSE: According to the report presented on August 30 by the UN’s Office of the High Commissioner for Human Rights, at least 300 people are in jail and being processed for their participation in protests against the government. Of these, 85 have been accused of “terrorism”. Two days after the publication of this report, the Ortega government expelled the UN High Commissioner from Nicaragua.

Ortega: “What exists are the versions of interested parties, not proof.  For their own dark purposes, they’ve invented these accusations of torture. We don’t use torture, it’s one of our principles.”

FALSE: Family members of those illegally arrested and jailed have denounced cases of torture and mistreatment in the cells of the El Chipote jail, in police stations and within the prison system, as well as in the FSLN campaign offices.

The OHCHR final report offers details of how some of those arrested “have been submitted to physical tortures, including burns, the use of barbed wire, blows from fists, pipes and attempts at strangulation, as well as to psychological tortures that include threats of death.” It also stated: “Men and women have suffered abuse and sexual violence, including using rifles and other objects.”

6- The key role of the United States

Ortega: “The United States is set on destroying the alliance that the Sandinista Front managed to construct between workers and business owners. And that was the starting point for this offensive that began in April.” 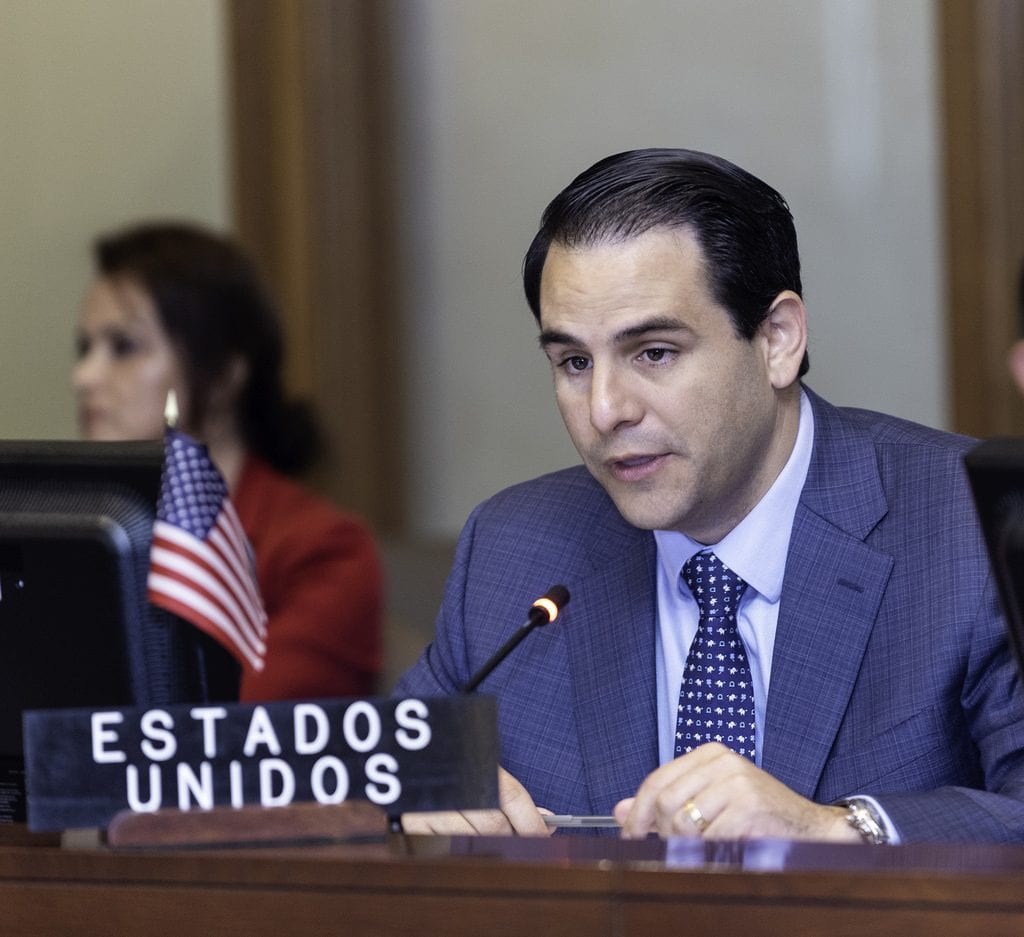 FALSE: The alliance, or “consensus”, between the government and the private sector that functioned as a corporate state, fractured on April 16 when the government unilaterally announced the later-revoked reforms to the Social Security system, rupturing the customary accords with the private sector. The official reform increased the quotas to be paid by both employer and employee, cut back pensions to the retirees and reduced future pensions.

The protests began as an outburst of rebellion following a decade of abuses on the part of the government. It was triggered by the criticism of the youth for the government’s handling of the forest fire in the Indio-Maiz Biological Reserve, the aggression of the Ortega-allied mobs, and the proclamation of the demand to recover university autonomy. The United States became involved in the international condemnation of the regime in the face of the official massacre, with a total of 320 confirmed deaths since the night of April 19.

Ortega: “The home that was burned and where a child died, an incident that was mentioned by Sergio (Ramirez), is a distortion of the reality. This was a home inhabited by a fellow Sandinista who had a mattress factory. Since he wouldn’t join the strike and he was in the hot zone, they came to attack him and set fire to his house. They burned the house down and the entire family died.”

FALSE: In the early morning of June 16, neighbors from the Carlos Marx neighborhood were awakened by a fire raging in a mattress factory that also functioned as a family’s living space. Two children – not one, as Ortega states – died from their burns, together with their parents and grandparents. One was two and a half years old, and one was a baby of five months. Ortega refers here to the national strike, the first one called for by the Civic Alliance on June 14.

Although the head of the household, Oscar Pavon, was a Sandinista militant, as Ortega states, two survivors of the fire, Cinthia Lopez and Javier Pavon, blamed the blaze on the Police and the “armed Sandinista mobs”. According to the neighbors, the police agents and the paramilitary attempted to enter the three-story residence in order to locate snipers on the balcony, but the family refused to open the door to them. “They were looking for a way to gain an advantage, to shoot at everyone so that we wouldn’t resist when they removed the barricades,” one witness assured.

Ortega: “It makes no sense to move up the elections. That’s the most ridiculous thing that’s been proposed. It would mean setting a very negative precedent that would give way to the idea that any time the opposition doesn’t like a measure, they could make a government go through elections.”

MANIPULATION: The same Ortega who now refuses to move up the elections, proposed this same measure in 2000 when he was in the opposition as the solution to the political crisis. This is evidenced in an interview with journalist Carlos Fernando Chamorro. In addition, Ortega himself had already accepted the idea of early elections in 1990, when he was sure that he would be the winner.

ORTEGA: “The enrichment of my family and accusations of nepotism in power are totally false. Have them show proof – they don’t have any evidence. In the executive branch, the woman who is the Vice President is there in her capacity as a militant member of the Frente and for her capability.” 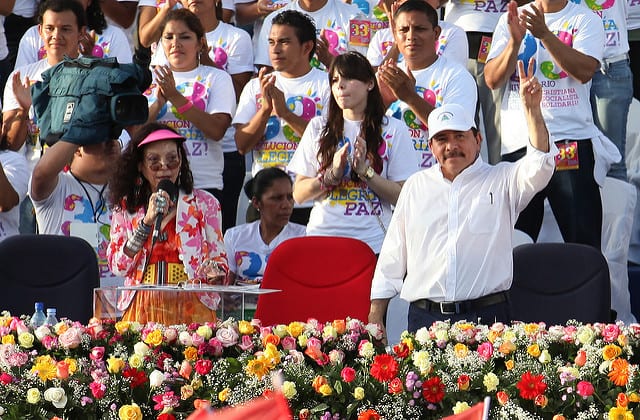 FALSE: Not only does Ortega govern in conjunction with his wife Rosario Murillo as Vice President, but in addition at least five of his children occupy government positions.

Rafael Ortega Murillo works in Foreign Relations; Laureano Ortega Murillo in matters of foreign investment based in the public-private joint enterprise ProNicaragua; and Camila, Maurice and Luciana Ortega Murillo are also visibly carrying out other protocol work during public acts, as well as traveling in official delegations.

Ortega: “The majority of the population desires the Inter-Oceanic canal, because we’re all convinced that it will bring Nicaragua a source of resources to be able to make a leap forward.”

FALSE: The construction of an Inter-Oceanic canal across Nicaragua has remained in the public imagination as a work of progress for the country. However, the concession to build the canal that Ortega signed with the mysterious and now missing Chinese tycoon Wang Jing, has been broadly rejected by Nicaraguans who consider that it compromises the national sovereignty. The movement for rejection has been led by the farmers’ organization that carried out more than 100 marches over the four years since the concession was signed. This group was never received by Ortega. The farmers that participated have also faced violent attacks when they attempted to travel to Managua to hold a demonstration.