The dead and wounded were at the barricades in 2018 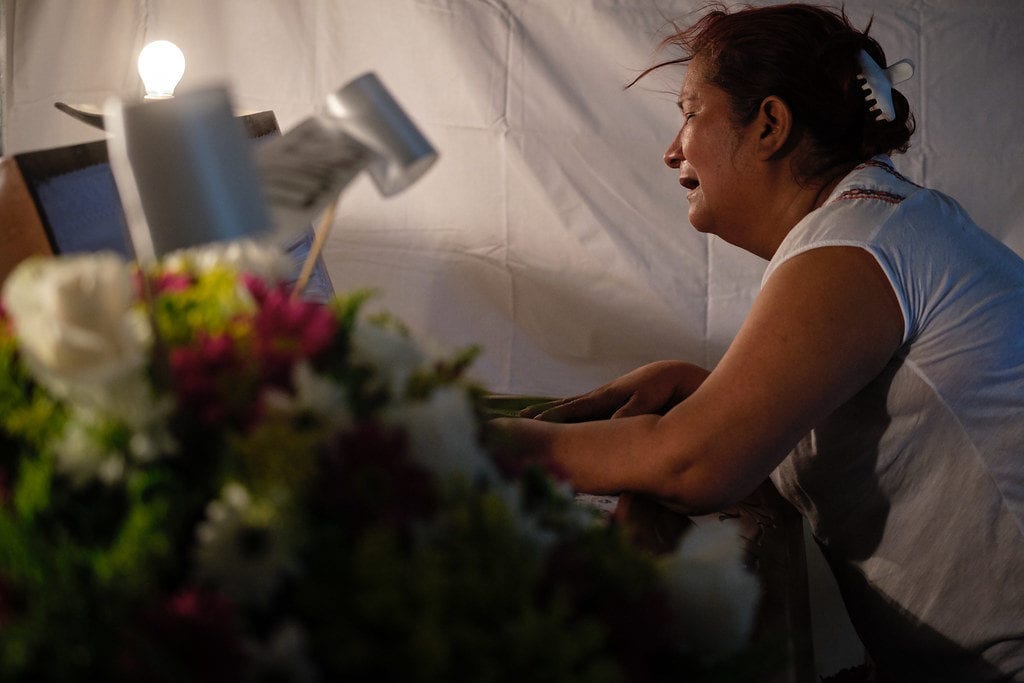 HAVANA TIMES – The last thing that the young opposition activist Bryan Murillo did on Tuesday night, just hours before police officers shot and killed him in his mother’s home in the Barrio Guadalupe of León, was to squeeze himself into a photo taken of his niece, Aylin Del Carmen, as she posed with her saint’s day cake to celebrate the Virgin of Carmen Day.

Murillo is frozen in time in this image in which he stretches his neck to get into the photo frame. Hours earlier, he cooked fried chicken for the entire family and he danced to reggaetón music with his niece and his four-year-old son while cleaning up his mother’s small living room. He had been sleeping in that room for several days after separating from his wife and returning to his mother’s house.

His sister Karen Murillo, had just returned home after two weeks in the hospital and her brother cooked for her.

“He spoiled me. He was joking around and playing with my daughter and his son. I was still weak so I went to lie down and this is the last time I saw him alive,” Murillo, in tears, told Confidencial.

Around 4:30 a.m., Marina López heard knocking on the door and immediately went to the living room where Murillo was sleeping on a mattress.

“Who is it?” López asked. No one answered, although someone continued to pound on the door more insistently.

López decided to crack open the door just to see who it was and someone pushed hard on it from the other side. “In the dark all I could see was men in black with guns who entered,” López said.

Murillo ran to the patio which is a small hallway just two meters wide with no exit. The family bedrooms are on either side of the hallway. He was the first to be hit by the gunfire. His family counted two bullet holes in his back with exit wounds in his abdomen.

The place where the 23-year-old fell dead was still stained in blood on Wednesday afternoon, while family and friends grieved in the living room where the victim had slept the last days of his life.

At the crime scene there were still shotgun shells and bullets from an AK-47 and a Makarov pistol. “It all happened within seconds,” the victim’s sister said.

The second victim hit was Kenner Murillo, who as of Wednesday night was still fighting for his life in the intensive care unit of the Óscar Danilo Rosales Hospital in León. Kenner Murillo has  a perforated intestine and liver, a broken leg and very little chance of survival, according to family members.

The young victim had just exited his bedroom, located to the right of the hallway, when he heard the shots and was immediately hit. At that moment his sister, Karen Murillo, came out of her bedroom and saw the two bodies lying in the hallway.

“I came out to see what was going on because of all the noise. I was barefoot and I felt myself stepping in something wet. I turned on the light and it was the blood of my brothers,” Murillo told Confidencial.

“Take them to the hospital,” Murillo begged, shouting.

“Don’t move. Don’t move,” was the only answer from police officers.

Murillo saw that nine heavily armed police were inside the house while another squad was waiting in the street.

Javier Cortez Castillo, who is married to one of the sisters of the two brothers, was the third victim to get shot. He opened the door to his room—the first in the hallway—and police shot him, immediately, according to López. López had to stay in the living room after opening the door because several agents held her down to prevent her from going to help her children and son-in-law.

Cortez Castillo was seriously injured and is in the hospital with a perforated kidney and a spleen.

Six hours after the brutal police attack, the police office of Public Relations published a press release accusing the murdered activist and wounded of being criminals.

“When they realized the police were present, the delinquents Bryan Yeraldin Murillo Lopez, in the company of Javier Feliciano Cortez Castillo and Kenner Javier Murillo Lopez, armed themselves with machetes and rushed at the officers in the patrol, with Lieutenant Álvaro Pichardo Salazar getting injured on his left forearm,” the police said in a statement.

The victimized family rejects the accusations and stated that Bryan had no criminal record. “They should show the injured policeman. They don’t even know how to lie. How could they even see the supposed machetes when it was pitch dark at that hour?” asked the sister of the victim.

“If my brothers had wanted to attack them with machetes, they would have thrown themselves on them. They were shot when they tried to escape the gunfire,” Murillo said at her brother’s wake.

They were protesting the government

Murillo said that her brothers protested against the government last year when the civic uprising began against the Ortega-Murillo dictatorship. The government and paramilitaries brutally repressed this uprising killing more than 325 people, according to national and international human rights organizations.

“This was a politically-motivated crime,” Murillo said. “My brothers were not delinquents. They were young workers.”

According to Murillo, her murdered brother worked as a carpenter, as a plumber, and whatever else he could do. Kenner, who was gravely injured, was the assistant manager of a Palí supermarket in León.

“This got out of my control”

After the attack, a police officer who was visibly nervous, went outside the Murillo López home with his cellphone in hand.

“Captain, Captain, send a backup because this got out of my control,” the nervous police officer said. This account was told to Confidencial by a witness who overheard the entire conversation.

Later in the hospital, a family member of the wounded overheard police who arrived as backup saying, “These guys are idiots. They shouldn’t have done this,” said Murillo, the murdered victim’s sister. The police in the hospital did not know that the family member was present.

IAHCR calls for an independent investigation

The Inter-American Commission on Human Rights called on the government to carry out “a serious and thorough investigation to clarify and determine who is responsible for these crimes.”

“The death of young Bryan Murillo López and the serious injuries sustained by Kenner Murillo López and Javier Cortez demonstrate once again the brutality of Daniel Ortega’s government. The circumstances surrounding the operation, as well as the profile of the victims, suggest that it may be a new act of lethal repression of dissent,” said Erika Guevara-Rosas, Americas director at Amnesty International.”

Luis Almagro, Secretary of the Organization of American States, also denounced López’ murder: “We condemn the murder of Bryan Murillo Lopez and we demand that those responsible be found and prosecuted,” he posted on Twitter.

CENIDH: an act of barbarism

The Nicaraguan Center for Human Rights (CENIDH) called the crime “barbaric” and pointed out that the Murillo Lopez family are well known opposition activists in Leon, and that they were at the barricades last year.

“CENIDH condemns this cowardly act that is part of a pattern of arbitrary, criminal and unpunished attacks carried out by public security forces and paramilitary against unarmed civilians, which includes apparent selective executions of rural campesino opposition leaders in recent weeks,” the organization stated in a press release.