HAVANA TIMES — An analysis of the food market in our country reveals the continuity of high prices which tend to increase, taking the official average salary of consumers into account.

When addressing this subject, the greatest problem is that the economic concept “market” doesn’t work in Cuba, we are subjected to an authoritarian socialist creation, which is a puppet that the Government pulls the strings to.

Out of the six commercialization sectors – the puppet´s strings – three of them are directly controlled by the government and display very few changes in prices to consumers, which deal with basic products:

The rations book quota is as scant as the 250 ml of vegetable oil that is assigned to every individual per month.

The parallel State market reduced the price of a pound of imported rice from 5 to 4 Cuban pesos (CUP), but people were unanimously saying:

“Brazilian or Argentinian rice isn´t 100% from these countries, it is mixed with Vietnamese or Chinese rice which is of a lower quality and is stolen from bodega stores where rations are sold, so that they can keep the price difference.”

Hard Currency Stores (TRD) have lowered the prices of some food products by 10-25% by decree, except sweets. Consumers are only able to buy chicken in quarters, entrails or a whole chicken, along with vegetable oil. If we consider the fact that 24 Convertible Pesos (CUC) the same value in USD) is the average monthly salary of Cubans, 1.70 CUC per kilo of chicken still remains out of reach for the majority of the population.

There are more than enough accounts about the instability of stocking these aforementioned products in the TRD network. 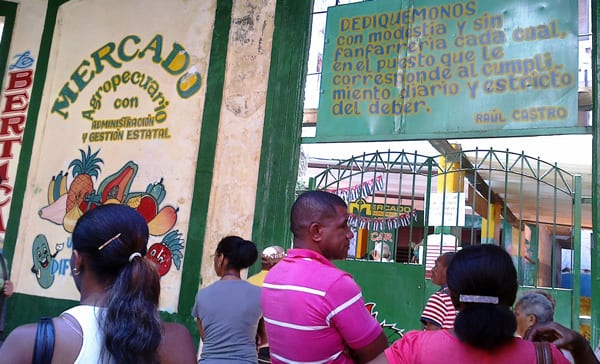 Vegetables and meat are sold via two other direct channels in markets that should compete, the agro-markets which are managed by the government and the Supply and Demand free markets. The latter are closer to the capitalism that dominates the rest of the world.

According to government media, the system declared “socialist” is hoping that the state market will force the free market to lower its prices, but the reality of things is different:

Where supply and demand reigns you can regularly purchase over 40 different products, which are fresh and have a good appearance, while the state equivalent of these stores only stock 5 or 6 different options, concentrating on bananas, yucca, malanga, squash and some kind of salad green from time to time. These markets are managed by the government and prices are fixed so as to prevent speculation, however, customers cry out:

You have to watch out for the truck, when it comes you have to queue up because what’s good always runs out fast, afterwards you only have malangas costing 4.20 pesos which rot away on the gondola, inedible yuccas which still cost you a few pesos, and yellow discolored squash that nobody wants to buy.”

The photograph manipulates the truth, we could only identify (8) products from the list on sale, including malanga and bananas. They were also more expensive than the prices displayed.

So it becomes a daily necessity to go to the supply and demand market. It’s the only market where you know you’ll get what you want, there is fruit, vegetables, spices, which are impossible to get a hold of in other places; fresh meat, boneless; now, of course, hold on to your pockets!”

The price of meat has been stuck at 45-50 pesos per pound for the last year, the price of salad greens and fruit is going up:

Fresh tomatoes are around 25 pesos per pound, garlic and onion cost about the same, Papayas have gone up to 6 pesos the pound and beans haven’t gone down from the price we knew months ago, between 10 and 18 pesos, except for chickpeas which cost 30. If we look back to the same time last year, prices are on an uphill slope.

Then we have the black market, which is very widespread and left out by government analysts. In fact it’s very easy to get hold of the same chicken thighs and drumsticks which are sold as part of the subsidized rations quota, at 20 pesos per pound, while a liter of oil will cost you 50 pesos.

The year that’s coming to an end has revealed a vicious cycle which we are never able to get out of: prices are maintained or increase, the slight increase in production and/or importing food productions, end up watered down in the population’s income.

The influx of foreign visitors is significantly greater, they give out tips, pay for a first world quality of life in a third world country, plus remittances, which have increased thanks to the measures that Obama’s administration have established, along with an unstoppable wave of Cuban migrants, plus pay rises linked to the public health sector and employees for foreign companies.

For the “lucky ones”, their purchasing power might be a little better, they have been able to feel a slight decrease in prices (of some products they can afford) or maybe they appreciate the fact that they are more or less the same as they were last year. However, retirees – 1.7 million in 2014 (of a population of just over 11 million) – think differently. Their average income doesn’t surpass 11 USD per month. The government´s proclaimed socialist equity is shattered if you take into account the fact that the active working population only earns double what is waiting for them when they are 60-65 years old.