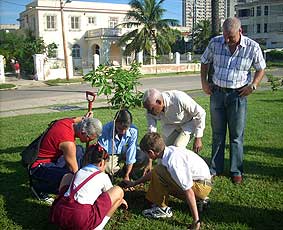 HAVANA TIMES, Dec 1 (IPS).- “It all began with the cutting of the ceiba,” recalls Isbel Diaz, founder of the project “El Guardabosques” (The Forest Ranger), an environmental initiative that seeks to raise ecological awareness among residents of the Cuban capital and involve them in the protection of their natural surroundings, in particular the city’s trees.

In December 2006, a State Forestry Service brigade radically pruned a hundred-year-old ceiba tree in the San Agustin district, on the outskirts of Havana, allegedly to prevent its branches from falling on a two-storey building that at the time housed a clinic.

“Before that, I wasn’t very involved with my community, I didn’t care much,” Diaz admitted to IPS. “But when they pruned that tree, I realized I had to do something,” he said.

Diaz, a young biologist, took photographs and made a video with images of the damaged tree, spoke with anyone passing by the spot, to convince them to sign a petition, and wrote to dozens of people to alert them to what had happened. Shortly after his actions, he was contacted by Forestry Service officers who informed him that what had happened was a violation of the pruning order.

The positive response from the authorities and the support of individuals and institutions prompted him to publish an electronic newsletter, El Guardabosques, http://www.sancristobal.cult.cu/sitios/mun/plaza/guardabosques.htm which is described as “an alternative in environmental communication.”

The bimonthly publication is backed by the Cultural Department of the municipality of Plaza de la Revolución, where Díaz works as a computer specialist. It is currently emailed to more than 500 subscribers, mostly universities, research centers, cultural organizations, and artistic institutions, both in Cuba and abroad.

In every issue, El Guardabosques invites its readers to report any attacks on trees witnessed anywhere on the island. The newsletter also aims to turn into a means of encouraging citizens to become actively involved in their own environmental education.

According to the Agriculture Ministry’s Forestry Planning Department, as of 2006, a little less than six percent of the territory of the province of Havana — the smallest of Cuba’s 14 provinces — was made up of wooded areas.

The Cuban capital complies with the World Health Organization (WHO) standard that recommends having 10 or more square meters of green spaces per capita. Data from the State Forestry Service indicates that Havana has an average of 13 square meters per inhabitant, with some suburban areas having as much as 33 square meters.

In 1996, the city launched a reforestation program, known as My Green Program. The main objectives are “reverting the silent catastrophe of the province’s deforestation,” and achieving effective city planning to care for existing trees and plant new ones wherever possible.

Between January and September 2008, 2.1 million trees were planted in Havana, representing almost three percent of the total trees in this country of more than 11 million people.

The rate of reforestation is expect to be lower this year, as compared to 2007, when nearly 137 million trees were planted on the island as part of a major United Nations Environmental Program (UNEP) worldwide tree planting campaign.

The “Plant for the Planet: Billion Tree Campaign” is aimed at encouraging civil society, government and business to take action and plant a total of at least one billion trees a year, focusing on native species and trees suitable to the local environment.

“The city’s trees are very old, and old is not necessarily best, as there are many aggressive species planted, which can rupture water cisterns and break the pavement with their roots,” Díaz pointed out.

In his opinion, “there’s a deep-seated indifference towards trees among both people and institutions.” This way of thinking, which leads to the exclusion of trees from urban planning, is to a certain extent the underlying cause of the “silent catastrophe” that is affecting local plant life, he said.

Díaz says that the city’s authorities also do not have the necessary resources to replace felled trees with other, more appropriate ones. Moreover, the State Forestry Service brigade in charge of pruning lacks adequate working conditions and training to perform its tasks.

Deforestation increases during hurricane season, when the electric power and telephone companies contribute to the pruning and felling of trees in their efforts to protect phone and power lines, the environmental activist noted.

Cuba’s 1999 Forestry Law places urban trees under the category of Recreational Forests, where “tree cutting is only permitted for improvement purposes and to enhance” the area’s recreational and environmental health functions.

This year, Díaz joined the organizing committee of the Action to Reinstate National Tree Day, a community-led initiative in the downtown district of El Vedado, which has been working since 2002 to bring back this celebration, initially established on Oct. 10, 1904 by a neighborhood association.

The group has also formed a Friends of the Tree Club, with the aim of coordinating the efforts of all those interested in preserving the city’s tree heritage.

According to the doctoral thesis “Deforestation of the Island of Cuba during Spanish Rule (1492-1898),” written by Spanish engineer Miguel Jordán Reyes and presented in 2006 at the Madrid Polytechnic University, the island lost 30 percent of its forest cover during colonial times.

In 1959, before the revolutionary forces led by Fidel Castro overthrew the dictatorship of Fulgencio Batista, barely 14 percent of the country’s total surface area was covered by forests. Today that proportion has gone up to more than 25 percent.