HAVANA TIMES – The death of poet Ernesto Cardenal was mourned by the Nicaraguan literary world, highlighting the importance of that literary genre to a country that considers Ruben Dario, another poet, to be their highest representative.

Poet and writer Gioconda Belli had the good fortune of visiting him a few hours before his death and was able to say goodbye to him. She stated later: “After Ruben Dario, Cardenal has been the world’s best-known Nicaraguan poet. He transcended the country’s borders and succeeded in becoming a figure that has inspired the youth, among which he has a great presence. I saw him in Europe, surrounded by young people at his readings.”

“He was a tireless student of poetry, especially when he began to write what he called “scientific poetry”. He set himself to study the mysteries of the universe. He was fascinated by them, but also by life, by the material that the universe is made up of, by the characteristics of human beings who are capable of so much beauty and so much cruelty at the same time.”

In addition to remembering him as someone who was “tireless in his studies”, Belli noted: “In his passage through life, he became a revolutionary when he had to do so. He left his Solentiname utopia to become Minister of Culture, with profound conviction and love, and with that same conviction he broke with the Sandinista Front in 1993, when he felt that Daniel Ortega had usurped the enormous legacy of those who had fought against Somoza.”

While facing the inevitable, the female poet recognizes that “it pains me that he died without seeing the end of the struggle that Nicaragua is currently living through.”

It is perhaps one of life’s ironies that the same government that accused and persecuted him through the courts while he was alive, have now expressed their “most sincere condolences” and declared three days of mourning, declaring their profound admiration for one they catalogued as a symbol of Nicaraguan glory and pride.

“There were 95 years of a beautiful life that must be celebrated for all that he leaves us, and because he lasted so long among us,” Belli added, recognizing that “he was a little cantankerous, but he also made gestures of enormous love for his community.”

On describing what would be her last encounter, Belli said that she was able to see him in the hospital and say goodbye to him, “and that makes me happy.”

“He was in the throes of death. I gave him a hug, a kiss and wished him bon voyage, because we didn’t know if he was conscious anymore. His eyes were closed, and he was having difficulty breathing. Now, I’ll be accompanying him in his last days, traveling to Solentiname on the weekend, where a cultural act will be held for his burial,” she promised.

Sergio Ramirez Mercado, a writer who has been honored internationally, said of poet Cardenal that “he was a man with many different facets during his life”. He emphasized how “from the time he was very young, he renounced worldly life and the privileges of his social class to pursue his religious vocation.”

His personal history includes time as a Trappist monk under a vow of silence; living out his priesthood and his celibacy; a fervent proponent of Liberation Theology; building the revolution, and suffering the fall in combat of those he considered his children there in the Solentiname archipelago.

Ramirez is certain that Cardenal “created a model for Spanish-language poetry, and it’s not every poet that can do that. His prose poems narrated histories in poetic form. He had the virtue of transforming other fields of knowledge such as history, biology, astronomy, into poetry.”

In his political dimension, Ramirez emphasized that the deceased was “a rebel who struggled against the two recent dictatorships in Nicaragua. Morally unbendable.” Ramirez also recalled, “I had a relationship with him going back many years. Very intimate, since before the revolution, as a literary and moral guide.”

Ramirez continued, “Cosmic Canticle is his greatest final work: infinite as the universe, and he was never going to finish writing it. He continued adding poems and more poems. The last of them spoke about the stars, the cosmos…”.

Of his works, he also recalled “Epigrams” and “Gethsemani Ky”. “He stood out with political poetry of the stature of “Zero Hour” and “National Canto”. His poetry was multidimensional, that ability to touch on everything.”

Writer Guillermo Rothschuh Villanueva said, “Ernesto Cardenal has been one of the great Nicaraguan poets. He gave continuity to political poetry, that same poetry that Pablo Neruda raised to the heights. Cardenal succeeded in writing books that are made up of an entire poem, such as National Canto or The Doubtful Strait.

There are those who forget that he had another facet when he began as a poet, that of “Epigrams” … where he enters into the field of romantic poetry,” Rothschuh detailed. 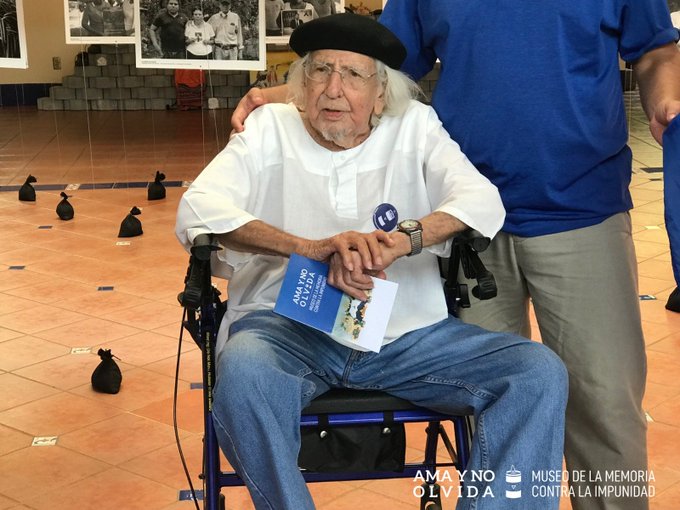 “Others prefer to exalt his “Prayer for Marilyn Monroe” for what it signifies: his homage to a woman that Cardenal identified as a victim of circumstances and the country where she lived. Nicaraguans of the 60s and 70s felt more drawn to his poems like ‘Zero Hour’ and ‘Psalms,’” noted Rothschuh.

Cardenal managed to convey a vision of his priestly condition with Cosmic Canticle, but overall, “he was a man with an enormous literary production who never abandoned his political activism, despite the scolding of Pope John Paul II during his first visit to Nicaragua in 1983. He had to wait until Pope Francis, before the Church finally lifted the prohibition on his saying Mass,” he recalled.

Rothschuh noted that the poet “turned Solentiname into a place that’s easily identifiable on the map of American literature. No one but him could have made this place stand out as a center that great writers visit, such as Julio Corazar,” who traveled there.

In what might be the poetic culmination of a life dedicated to poetry, Ernesto Cardenal will be buried in Solentiname, beside his “children” – the youth who lost their lives fighting against the first of the two dictatorships that the poet confronted with his words and his example.