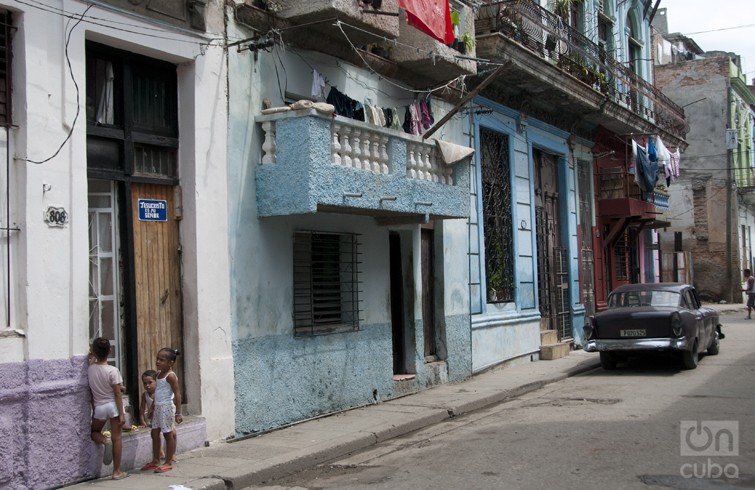 HAVANA TIMES — From this balcony, the boys from the neighborhood would jump head-first into the deep river that Gloria street had turned into this past April 29, after 188 millimeters of rain was recorded at the Havana weather station in Casablanca in the course of four hours. Three people died, parts of and entire buildings collapsed and the authorities reported that over ten thousand people were affected by the sudden downpour that in the Cuban capital.

Today, Gloria street is already dry. Children can play out on the street again. The children, still too young to have any sense of the danger or losses, seem to be the only ones who are happy right now.

OnCuba immediately published the stories of some of the people affected by the strong showers that day. We have returned to those places on several occasions to follow these people in their mourning and recovery. Two weeks after the floods and collapses, we return to find out what’s become of these people and what support they have received after a tragedy which, according to Cuba’s Civil Defense Department, left 1,400 homes flooded. 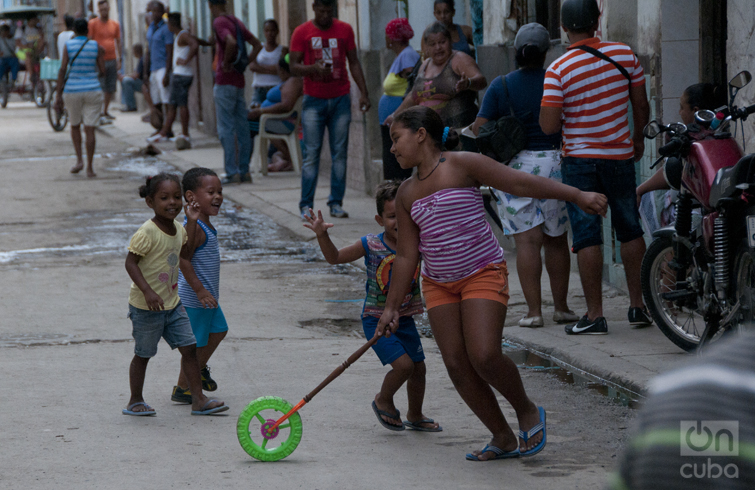 On Thursday, May 7, we met with a sad, unsatisfied and angry Patricio Armas, the 81-year-old widower whose wife, Marta Damiana Acanda, drowned on April 29 on Gloria street, between Rastro and Carmen streets. Two weeks after the death of his wife and the loss of the few household appliances he owned, no social worker or Civil Defense or government official has gone to his home to offer any aid (in addition to the replacement mattress he was given).

Patricio, retired and left with only 143 pesos (around 7 USD) of his pension after paying for his Haier-brand fridge every month, wants financial aid. He wants a new TV where he can “watch the news,” he says. “In all of my years of work, I’ve never once asked for any help from the government. If I ask for it now, it’s because I need it.”

According to some of the people who live on Gloria street and offered their statements, the streets in the area tend to flood before the forecast announces rain. Olga Garcia, who lives on Esperanza street, tells us that, a few months ago, a work brigade arrived in the neighborhood to dredge the sewer lines. Everyone thought the situation would improve. However, the brigade never finished the job and, rather than improve, the sewers became more heavily clogged with the rubble they left behind.

Olga was one of the many people whose food was spoiled by the incident. “The water covered the fridge at my home. The chicken I was saving for Mother’s Day was swimming in the freezer.” According to Olga, on April 30, at around half past one in the morning, government officials brought them a bit of rice and mince-meat that was “cold as a stiff.” “Fire-fighters and the Red Cross have been to the neighborhood, but, beyond asking about the situation of the locals, they haven’t offered any concrete aid. Nothing is being done. Everything remains the same after almost two weeks: the mattresses, the filling, the furniture drying out under the sun, on the sidewalks, the walls still wet and marked by the rainfall.” 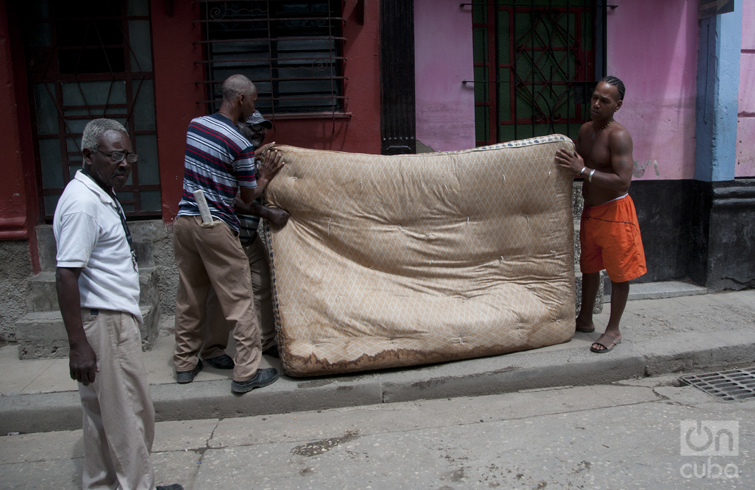 The government’s response to the situation that arose following the intense rains of April 29 has primarily consisted in selling mattresses to those affected and offering food to those who still do not have the means of cooking.

At 3 pm on Friday, May 8, 15 people stood outside the MAI located at the intersection of Monte and Angeles street, waiting for the store to open. Many of those who’d been waiting there since 6 am to join the long line-ups that have been forming since the sale of mattresses began grew tired of waiting and left, as there was a power-cut in the area and the store didn’t open that day.

Barbara Fajardo, who lives on San Felipe street, can buy a mattress at half-price because she is a home keeper. Pensioners also benefit from the discount, and indigents can obtain them for free. Families who do not have the cash to pay for the mattresses can purchase them through the bank, on credit. For many, this becomes a real problem, particularly if they’re also paying for household appliances like television sets and refrigerators.

The most serious issue does not appear to be the price of the mattresses or the slow and rather indolent way in which the damage caused by the floods have been addressed. The greatest problem appears to be pointing in two main directions. The first is the underprivileged and poor nature of those who will barely manage to replace what they lost, of people who weren’t doing well at all even before a single drop of water fell on their homes. The second is the insecurity that prevails in the area, for, if similar rains were to fall, the incident could repeat itself. As we know, Havana’s drainage system is not as efficient as is required. 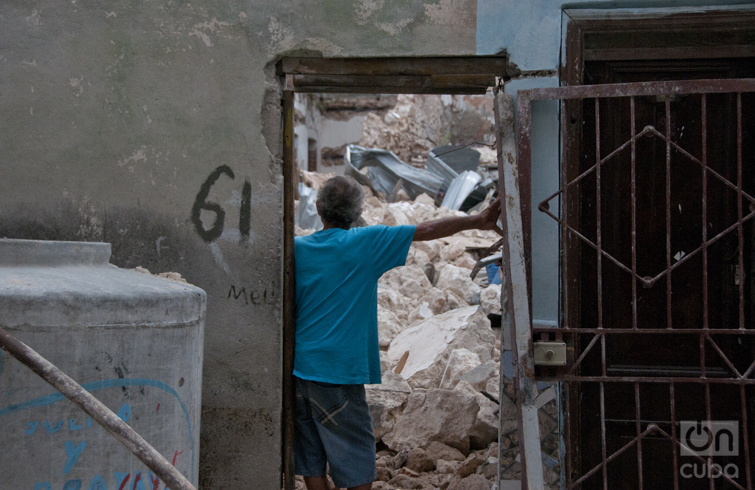 In Havana, the grave housing deficit and the slow recovery plans that tend to follow a disaster turn most of those affected into chronically ill patients. Those who lose their homes can spend the remainder of their lives in State shelters, or, in the best of cases, they may have to wait years before a home is assigned to them.

The cooks at the “Ten Cent” Bar located on Suarez street, between Corrales and Monte, refer to those affected by the rains of April 29 as the “new ones.”

For those who aren’t familiar with the establishment, at three in the afternoon on a Thursday, the “Ten Cent” bar is a hot, sweaty, foul-smelling place full of alcohol and crude-spoken men, a place of darkness and noise. The neighborhood’s decadence is concentrated there, precisely the place that should be a shelter for those in need of aid.

Juana Alma, who has been working at this State establishment for nearly 10 years, has become used to dealing with the victims of disasters. According to her, some people have been living in State shelters for more than 20 years and still need to eat there, not having their own means of cooking a meal.

From the night of April 29 to lunch-time on May 2, employees at this establishment received over 270 people affected by the rains. The victims of the disaster complained about the poor quality of the food. At 61 Factoria street, where nine apartments collapsed on the afternoon of the 29th, we met with Isabel Gonzalez, who explained to us how they managed to get their food during the first days following the flood.

“The food they gave us at the “Ten Cent” Bar was a bit of yellow rice with spoiled bits of fat and half-boiled potatoes. I’d rather buy a pizza out on the street than eat that,” she says.

Yaremis Kindelan, the mother of a five-year-old girl who was watching television when their home collapsed (and miraculously survived) spoke to us one week after the tragedy. “They haven’t even given the children any milk. And we have pregnant women here.”

Last Friday, in the vicinity of Factoria street, a crane was lifting the rubble of what was once the home of Yaremis, Isabel and other tenants. Occasionally, one of them would turn around to watch the crane’s heavy metallic claw scoop up the rubble. At this point, the crane must have already left the area clean. Later, they will likely install two or three wrought-iron benches and a seesaw there, and set up a park. 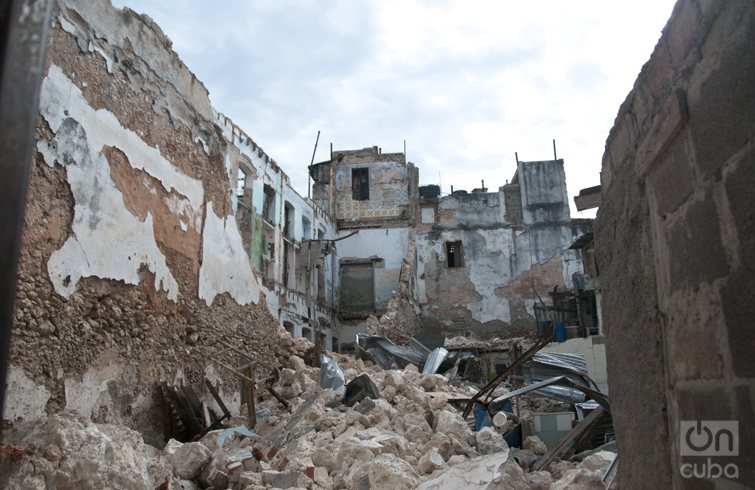 We came across Jessica, the eldest of 71-year-old Ernestina Ulacia’s granddaughters, sitting on a wooden, leather-backed stool set in front of the remains of 110 Florida St. The home where her mother, grandmother and sister lived collapsed after an old, uninhabited building on Alambique street (a building that has been threatening with collapsing for nearly 45 years) fell on top of it.

Enestina Ulacia was hospitalized the same day the building collapsed. She was trapped beneath the rubble and fractured several bones, including a hip. Her family has temporarily moved to the home of relatives on Puerta Cerrada street. Ernestina underwent an operation and is now awaiting a skin graft for one of her legs.

Some of her belongings are still under the rubble of what was once her home. A neighbor boarded off the remains to prevent these from being “scavenged.” “They gave us two mattresses and offered to take us to a shelter in Arroyo Naranjo, on the outskirts of the city, but considering the condition my grandmother will come out of the hospital in, we can’t move to a shelter,” Jessica tells us.

Maria Luisa Iglesias, 70, is the head of neighborhood watch in the area. “In cases like this,” she explains, “the Committee for the Defense of the Revolution (CDR) normally works to give the family an uninhabited house in the neighborhood, but neither of the two available have a roof and they are both in very bad shape.” When we went to Florida street a second time to ask about Ernestina, she saw us arrive from the door of her house and sent someone to take us there, wanting to speak to us.

The condemned building that fell on top of Ernestina’s house is still there, she tells us. They haven’t come around to tear it down completely. Maria Luisa tells us that, in 1970, they evicted the building’s tenants for the first time, owing to the risk of a collapse. Other locals fear that concrete giant will collapse again on top of their homes, as it did on April 29.

Jessica also believes that, when the remains of the building finally come crashing down, they will crush everything below. What she is afraid of now is for a strong rain to come down again. Her fear is almost inexplicable, considering her home has suffered the worst of it already. She expresses a fairly widespread feeling: even those who have nothing more to lose fear the day’s weather forecast.

17 thoughts on “Gone With the Rain”