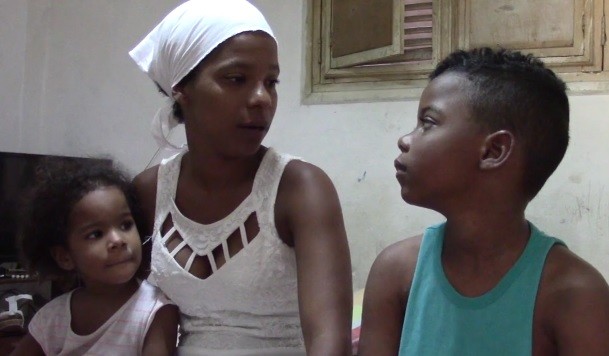 She used to live with her mother and another 16 people, in a house that was unfit for habitation, which was supposed to be turned into a homeless shelter. Over time, her neighbors were given other places to live, but her case is still pending because she has a large family, so she has been told by officials at the local housing authority.

Yoana knows that she has committed a crime, but she couldn’t wait any longer, it’s a long list and those who have the means pay to get to the top of the list. She has three children and finds it very hard to raise them. The Housing authority knows about her situation, but they are more interested in evicting her than giving her a home.

Her situation is even more difficult because one of her young daughters has special needs. She is a single mother on Family benefits, but she only receives 175 pesos (barely 7 USD) per month. The legality of her home is still on the table as she is being constantly harassed by the local housing authorities and police.

In order to prevent unexpected visits, her door is always closed with a padlock. Her mother takes care of the children whenever she goes outside to try and make a living.  She sells what other people bring her, used clothes, sauces, jams, whatever she can, to get by. Her alcoholic father wanders the streets with no interest in helping out the family.

Yohana’s only concern is to give her children a decent home. She is worried about her children’s future if anything were to ever happen to her. She fights for a home where they can grow, a home she never had.