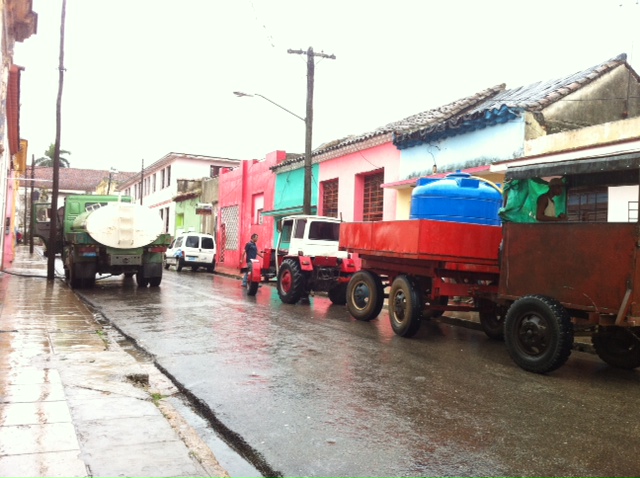 HAVANA TIMES — Water shortages in the town of Santiago de las Vegas (in Havana’s municipality of Boyeros) have become more frequent since January of this year. According to employees of the Aguas del Sur water company, “water sources have been exhausted and, as a result of this, more than forty thousand people in the capital are suffering water shortages.”

Origin of the Crisis

“There’ve been problems with the water supply in Santiago de las Vegas for several years. When the new aqueducts were installed, the problems became more critical,” Pedro, an elderly man who was born and raised in the locality, commented. He added that, when the new hydraulic system was set up, the engineer responsible for the installation was dismissed from her job for “unknown” reasons. According to the information given the population, she had lost the schematics of the previous installation and, luckily a copy of these were found at the museum of the locality.

Day and night, Aguas del Sur in Santiago de las Vegas (with the support of Aguas de la Habana) has supplied locals with the precious liquid through water trucks in an effort to alleviate the desperate situation many families find themselves in. Some residents say they are receiving this service every day, but others (particularly families living in the higher areas of Santiago de las Vegas) claim they haven’t seen a drop of water since January of this year. In response to this crisis, the Boyeros municipal government has mobilized over 50 water trucks as part of a plan to mitigate the problem.

Things became so tense that there was even an attempt to physically attack one of the officials who had been tasked with taking peoples’ water supply requests in the area. “People are in part to blame. If they didn’t pay 10 CUC (250 Cuban pesos) for a truck of water, then some drivers wouldn’t go off their route, leaving those affected without water. That’s got to stop!”

The situation was criticized by several people at an extraordinary meeting held on June 1, called by Diego, the current People’s Power Council Chair in the Municipality of Boyeros.

According to locals, this was the first time in several years that an official appeared before the population of their own will. Diego has been heading up the local city hall for a little over a month and has promised to work to overcome the most serious problems faced by residents as quickly as possible – in this case, the water shortage crisis.

A Light at the End of the Tunnel

It was difficult to establish communication at the meeting – it was clear that people were fed up. Despite the rather tense atmosphere, Diego remained calm and accessible throughout, as people aggressively pointed out the water crisis.

“I don’t understand anything. We live above a deep underground river. How is it possible we have no water?” asked Aurora, who informed the officials present of a secret passageway that connects the primery school with the church in Santiago de las Vegas. “If you place your ear against the walls inside the tunnel, you can hear the underground river.” She added that, thanks to “someone’s” idea, they had sealed up several wells with spring water, deposits which had been of great help for the population in times of draught and natural disasters.

Diego emphasized the lack of discipline among locals and concurred with a number of people regarding the inadequate handling of water valves, a practice which results in poor distribution of water and, consequently, lack of knowledge about how water supplies are being distributed in general.

He reported that, to overcome the crisis in the short term, a new supply line originating in Bejucal, province of Mayabeque, was installed in record time. The line is connected to 3 wells which, according to experts on the matter, have enough capacity to satisfy the demands of the local population. He also stated they were expecting new pumps from abroad, to guarantee greater water pressure, a matter he would be reporting on as soon as possible.

“Unfortunately, the solution turned out to be a more serious problem. A new pump burst a pipe, creating an artificial lake,” the official declared, asking those present for a vote of confidence.

Those gathered were finally informed that the La Aurora water tank, located on the Cacahual plateau, was being repaired and that this would offer a definitive solution to Santiago de las Vegas’ water crisis, as this water would reach the locality by force of gravity.

At the close of the meeting, participants agreed to set up a control and registry office to monitor incidents related to this issue, as well as address the garbage and misdemeanors crisis. Several telephone numbers where such reports can also be received by the municipal government were given the population.

According to the press, a draught is affecting the entire country and severely affecting cattle ranches, which have also been supplied with water through pipe-trucks.