HAVANA TIMES — During the summer break, one takes advantage of the free time to go on the outings you can’t accommodate at other times during the year. Even though we’re not actually on vacation, our son, Rogelito, is everything to us and he deserves all good things we are able to give him.

So as the summer break was coming to an end, I decided to take him the Isla de Coco (“Coconut Island”) amusement park. The park was built where the renowned “Coney Island” was once located, in Havana’s neighborhood of Playa. It is close to the International Convention Center and the La Concha club and beach. Because of its location, the park is relatively easy to reach for us. We caught a miraculously efficient bus that left us there after a mere three stops. 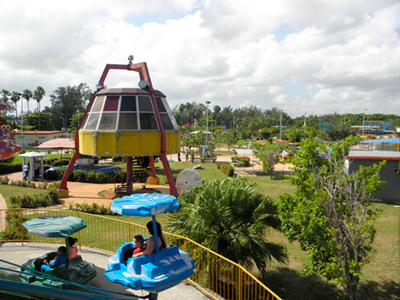 The park, built using Chinese technology, opened its doors to the public several years ago. A large number of mechanical rides and devices that had never been seen before in Cuba were set up there. When it first opened, the most striking thing for me were the huge crowds of people it drew. Several of its main attractions also broke down fairly quickly.

We had gone to the nearby La Concha beach several times recently and had noticed the amusement park was not as crowded as it used to be and that most of the rides were working. Rogelito was interested in going there and we planned a trip for last Saturday.

We arrived at the beautiful amusement park at around ten in the morning. Purchasing the tickets is a somewhat bothersome process because each ride requires a different ticket, even though there are only two different prices. Children pay for each ride with one ticket and adults with two. Having fun is always going to be expensive there (even if you don’t buy any sweets, like us). 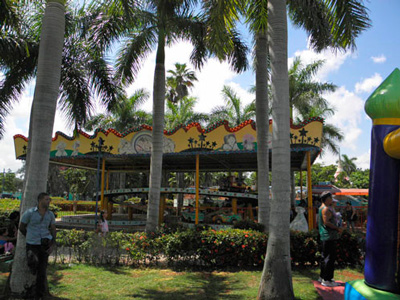 The flying saucer ride amused us greatly. It doesn’t go round too quickly and one can adjust the height of the saucer using a lever inside the car. Rogelito liked the bumper cars very much. The local roller-coaster is nothing out of this world when compared to those in the world’s great amusement parks, but, for our neck of the woods, it is quite the adrenaline rush.

Despite its origins, the park has been Cubanized considerably. “Coconut Island”, in fact, is taken from the comic strip authored by our Jorge Oliver. The characters of Captain Plan and his friends and the evil but humorous Rui La Pestex decorate the paths and small boulevards inside the park. They are joined by other Cuban characters, such as those belonging to the Elpido Valdes saga. In fact, the horses in the merry-go-round have the faces of Palmiche, Elpido Valdes’ loyal horse. 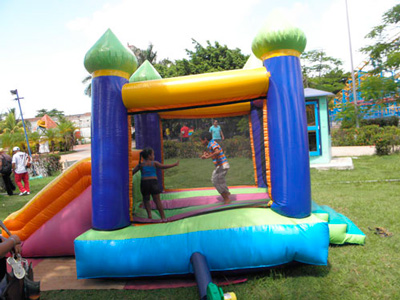 Most of the rides we went on were quite fun. Only the “Elephant Octopus” gave me a rather unpleasant experience. I could never be an astronaut – the rapid spinning makes me very dizzy. I wedged myself in and held on with a leg and an arm while holding Rogelito with my other arm, then closed my eyes until the cursed machine stopped spinning.

The more modest and traditional swings and see-saws can also be found at the park, but, located in an open area under the merciless sun, they attract very few visitors. The offers of the self-employed combine effectively with the State offers including toy, knick-knak and snack kiosks. The person running the inflatable castle showed himself hugely generous and flexible in terms of prices, earning a free promotion from me. An arrogant crab questions his upstart neighbor without leaving the comforts of its cave.

I realized how exhausting the outing had been when I got home. Rogelito, however, showed no signs of tiredness and aspires to go back and have other experiences there.

3 thoughts on “Havana Summer and the Coconut Island Amusement Park”