HAVANA TIMES — Two months ago, I interviewed Heidi Ponce de Leon for my article “The Good Life in Cuba.” During our conversation, she told me that one of the activities of her studio (Estudio Cleo) was organizing was a workshop for kids, scheduled for the month of July.

I thought that, like many other plans one makes, this would not come to fruition. A little over a week ago, however, I got an e-mail announcing the workshop. The workshop, aimed at children, was held at 10 in the morning on Saturday, July 20, at Estudio Cleo, located on I street, between 21st and 23rd streets, Vedado.

I decided to take my ten-year-old niece. On the way, I regretted not having told her to bring a book with her, because, in Cuba, when someone announces something will start at ten, it usually starts at ten thirty, or eleven. Children tend to get bored easily and become anxious. On Saturday, they didn’t get a chance to. The workshop began at 10 o’ clock sharp.

What was the workshop about? Quite simply, it was an opportunity for children to unfold their creativity. 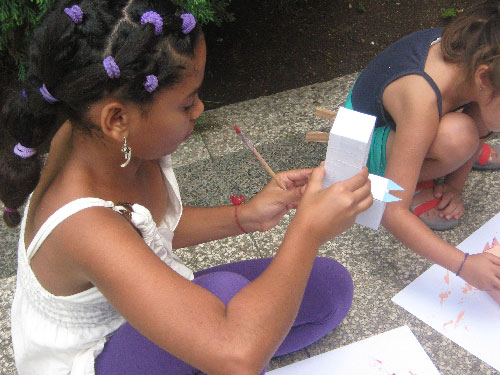 Heidi Ponce de Leon, a craftswoman and head of public relations for the restaurant La Buena Vida (“The Good Life”) and the studio, started the workshop by showing the kids different objects and asking them what they thought could be made with them.

She had covered boxes, pop cans and toilet paper tubes with paper so that the children could decorate them as they pleased and build the objects they wanted with them.

There were many things the children could pick from, including paper and drawing materials, as well as a cardboard castle the kids were asked to decorate.

But the main course was the creation of dog-figures with boxes which, in addition to being a good way to celebrate Cuban Children’s Day (which was the following day), was an apt tribute to Friendship Day, celebrated the day of the workshop. When Heidi asked who man’s best friend was, all of the children gave the same answer: the dog. 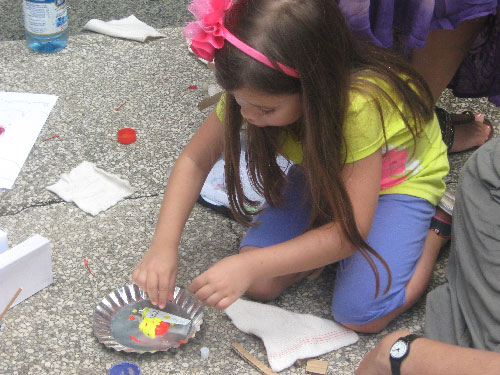 No kid remained inactive, not for a minute. Not even while waiting for the paint or the glue to dry. In a little over two and a half hours, they had built a cardboard dog, drawn and decorated picture frames and vases and adorned the castle.

One of the things I liked most about the workshop was the fact it was not a competitive activity. The kids showed themselves willing to help each other and show their works to one another, without the need to compete. There were even some parents who got into the spirit of things and picked up a brush or two.

The workshop didn’t focus on the visual arts and crafts alone. Ricardo Ponce de Leon, a retired machinist and Heidi’s father, taught the children how to sow a plant. The children planted seeds in pots made out of small, yogurt cups, learning that, once empty, these small containers can go to good use.

At the end of the workshop, every kid got a diploma printed by the studio and was able to take home their creations and potted plant.

We hadn’t even left the studio when my niece started to ask me when they would hold that workshop again. Heidi Ponce de Leon doesn’t yet have an answer to this question. In fact, this activity was attended to mostly by kids from the family, neighbors and friends.

The workshop was only a taster of what such a project could do for the community. It was also an example of how a child can be entertained without stress or a lot of money. My niece hopes there will be another workshop soon, and I am sure all the other kids do as well.