HAVANA TIMES – He doesn’t remember what he ate for lunch that day, but he does remember throwing up until his insides hurt. He was dizzy and couldn’t breathe properly, about to pass out. El Chino had lied down for a little while to have a siesta nap and cool down in the hot afternoon, in Havana’s Tallapiedra neighborhood. He switched the fan on, closed the windows and turned off the lights. Maybe that’s why his neighbors assumed he wasn’t at home and didn’t call out for him before.

A burning sensation in his nose and throat woke him up. Then he heard the commotion out in the corridor, his neighbors shouting. When he opened the window to see what was going on, the gush of polluted air made his eyes glaze over and he could no longer see when his eyes started tearing up.

“Chino, run, get out of there, there’s an ammonia leak at the power station!”

He managed to get dressed and ran out onto the street, heading towards the Malecon and far from the power plant that stood just a few meters from his building. He got to his daughter’s house, three blocks away, completely out of breath.

“She splashed my face with a lot of water to get rid of the stinging,” El Chino remembers. When the vomiting had stopped and he no longer felt dizzy, he lied down on the sofa to try and sleep, but he couldn’t. The scare was greater than the injuries he sustained.

He might have been one of the most affected by that ammonia leak. Other neighbors remember having their left their homes like they routinely did, but they had never breathed in the contaminated air because of the direction the wind was blowing. That happened years ago, people say, and there haven’t been any more leaks; but gases and the black smoke that make everything dirty at home and your clothes aren’t the worst thing; the noise is the worst thing about living next to a power station.

Tallapiedra’s old power plant (Station 6) – today, Otto Parellada (Station 7) – provides services to the National Energy System, using only its more modern facilities. The oldest structure dates back to 1914, when the neoclassical building which identifies it was built. Currently in disuse, many of its spaces are at risk of collapsing. 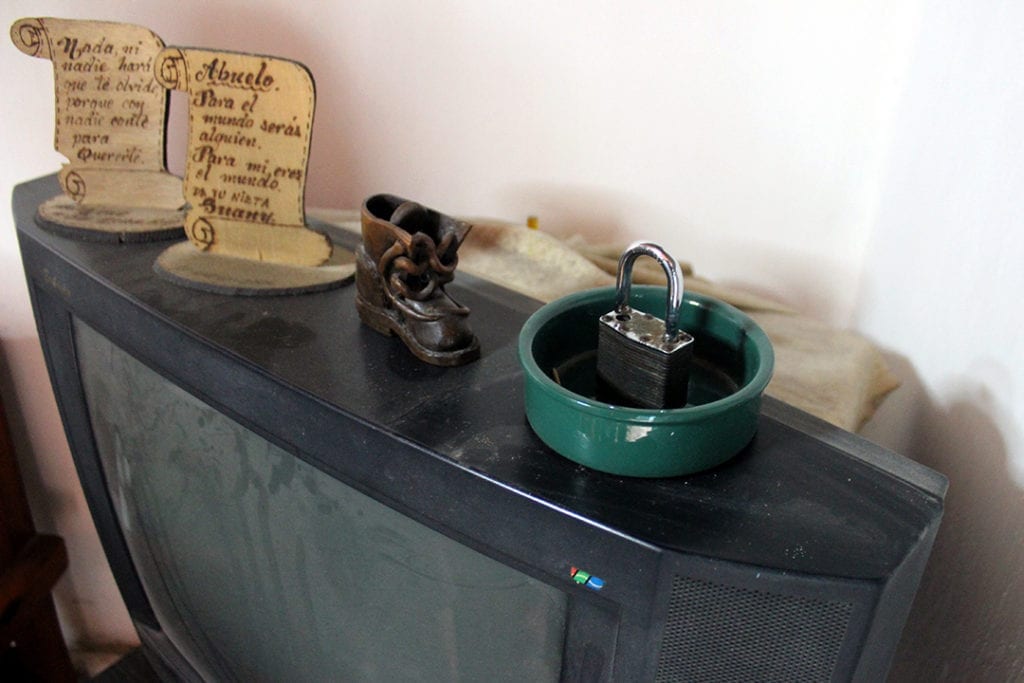 Heriberto Chao (el Chino), journalist and local resident at no. 218 Puerta Cerrada, between Alambique and Florida Streets tells us:

“I’ll never forget that day of the ammonia leak. Honestly, I didn’t think I was going to die, but I was scared by the time I got to my daughter’s house. After that, life has carried on as normal and all of us neighbors continue to co-exist with the power station and all of the problems it causes us. The noise, the soot, the constant grime. Just look at the TV! Don’t go thinking that we are pigs, we cleaned it yesterday, but the black soot in this area is never-ending.” 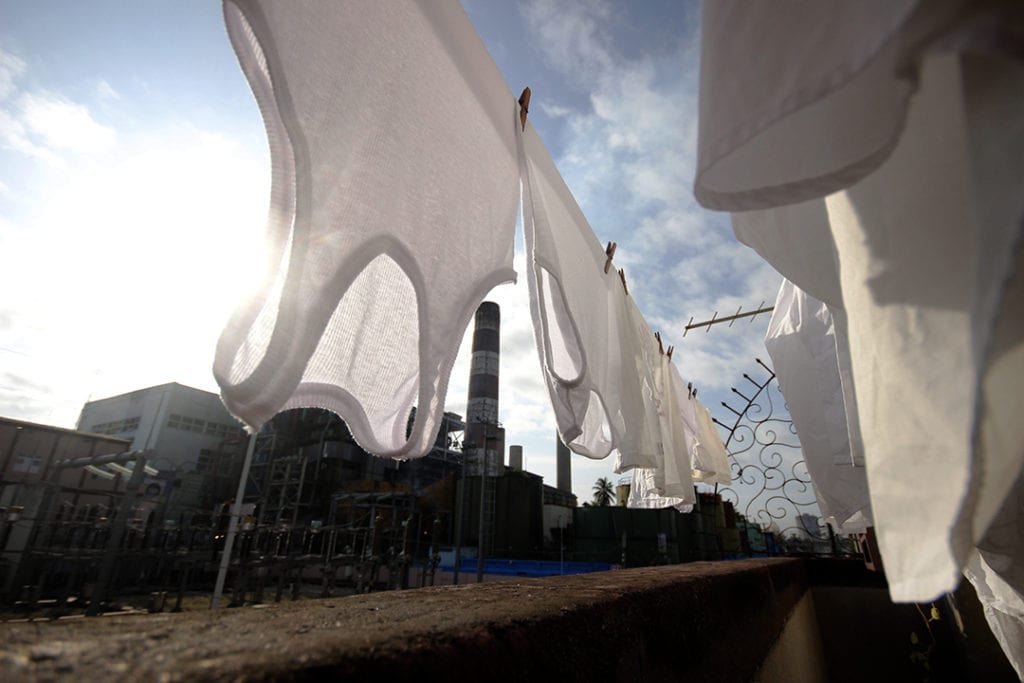 “It’s hard living in this neighborhood, but we’ve been in this house for 17 years now, you get used to living with the power station and all that it entails, especially the noise. It affects all of us, but especially the children. Before, when it used to break down more regularly, the valves would make a lot of noise during the night. My son would wake up in a fright, crying, and we couldn’t fall back asleep until the repair works were done. Alexander is 7 years old now and he’s got used to the noise because he’s grown up listening to it. He doesn’t even wake up anymore when it makes a lot of noise in the night.

Soot and dust that stain all our clothes is another thing. I’ve just hung out all of the boy’s school shirts and I’m hoping the wind doesn’t change direction and come this way because otherwise they’ll get stained and they’ll never be white again.” 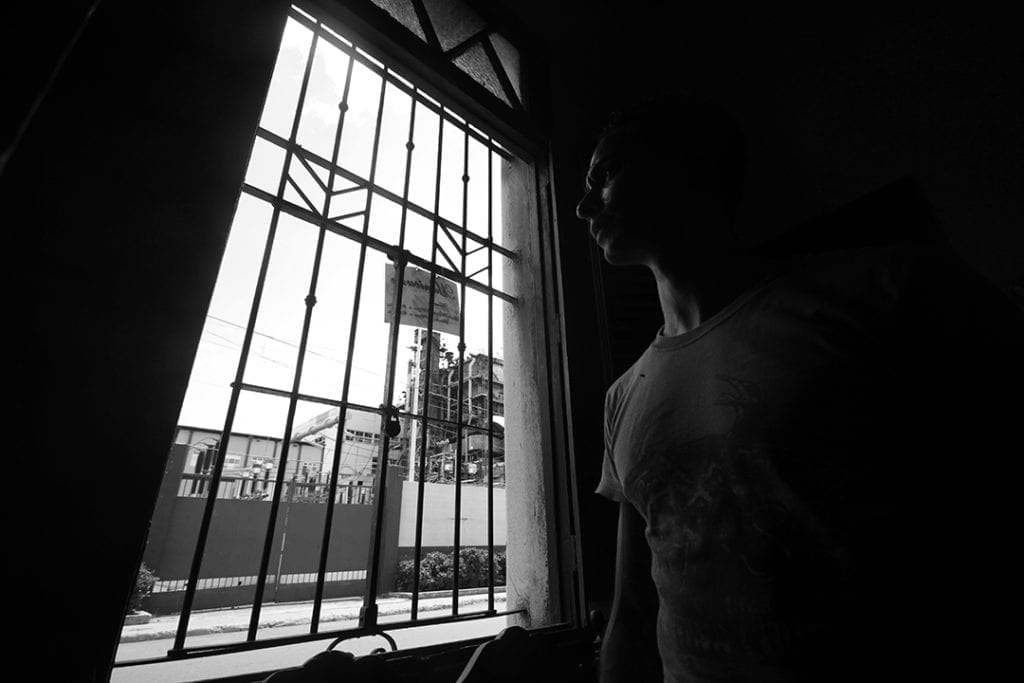 “I’ve been here 23 years, my whole life nearly, and it’s all a matter of getting used to it because I don’t even hear the noise anymore. It seems that they have made some repairs because the smoke doesn’t fall here as much anymore and the noise is a lot more controlled, except for a few days.

Scared? Well, no. Yes, it might explode one day, but the firefighters come immediately… but I don’t think it will explode like Chernobyl. At least I don’t go around thinking like that otherwise I’d be afraid my entire life.” 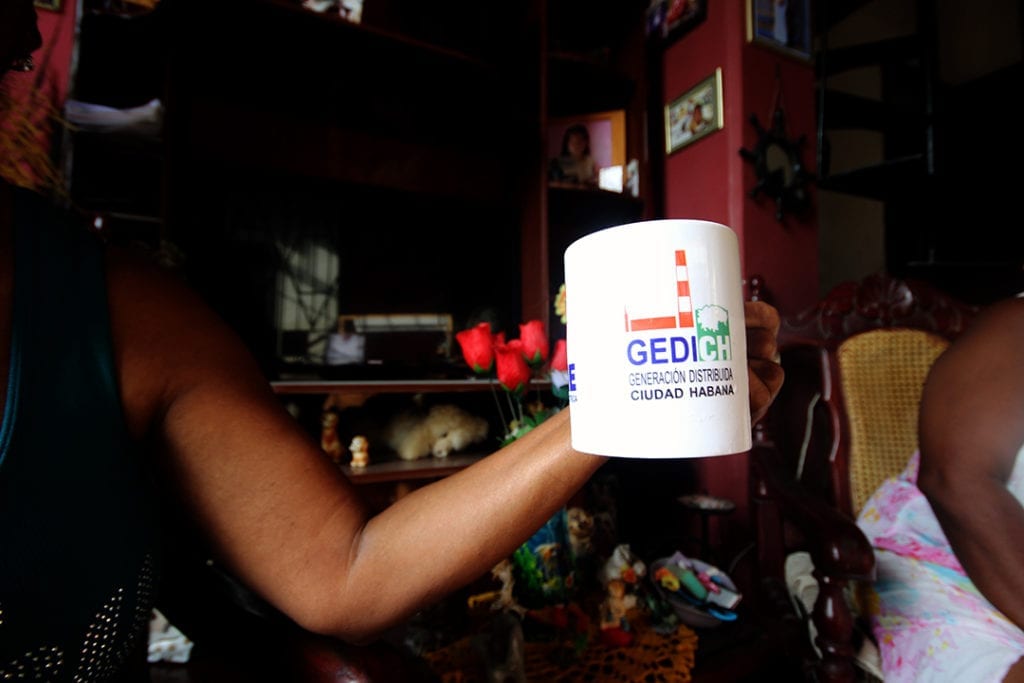 “I’ve been living and working at the plant for some time, so I’ve already got used to the noise. I don’t remember there being any accident, but there were some gas leaks… and when something breaks and the generator has to let out pressure, that’s when there is a lot of noise. When that happens, you have to wait until it finishes because you can’t shut down the power station. We are subject to the [Cuban Electric] Union, only they decide when the plant shuts down and that rarely ever happens… no matter how much neighbors are inconvenienced.” 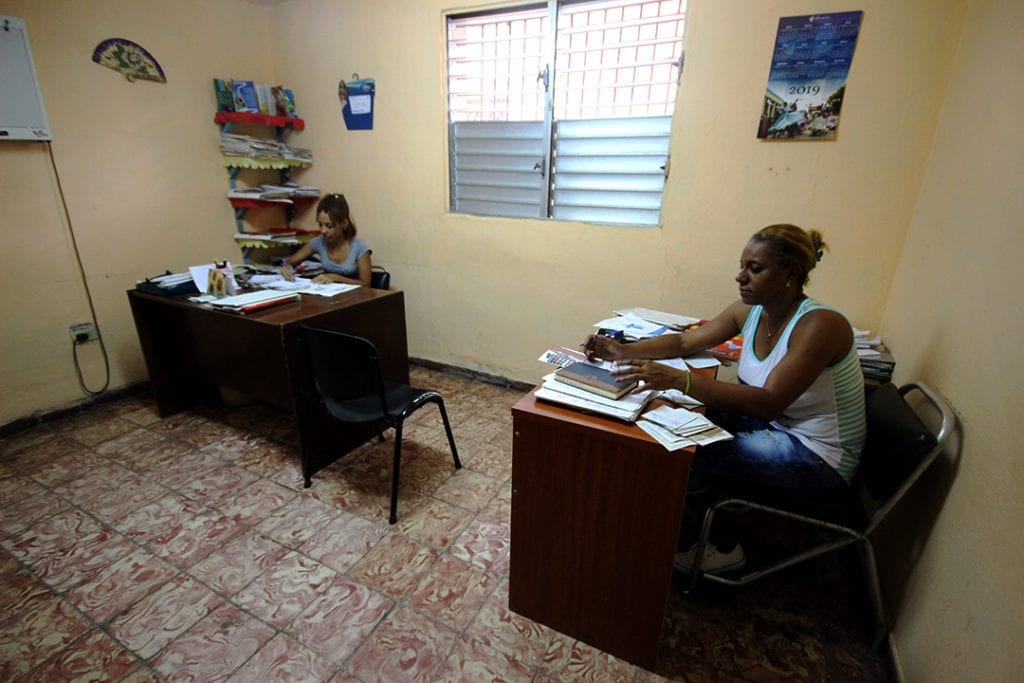 “Now, there is a new system with a new motor that affects people’s hearing a lot every time it starts up. Sometimes, the noise lasts for whole days and nights at a time, and it can get so loud that you can’t even have a conversation because you can’t hear the person in front of you. The local population complains, about the noise especially, but also about the soot that makes everything dirty.

There was an ammonia leak six or seven years ago. When we smelled it, we had to run towards the Malecon because you couldn’t even breathe. Another day, there was a huge explosion inside the plant but we weren’t evacuated because we were told that the fire was under control and that the firefighters were there. We have learned to understand its noises, over time.”

“Residents make significant complaints about the noise pollution. We communicate these to the provincial Health board and we are still waiting for a response. The noise is constant, day and night, which has affected people in many ways, not just their hearing. There is also a psychological and emotional impact that is manifested in high stress and anxiety levels, especially in children and the elderly, who are more at risk. Air pollution here aggravates the condition of people with respiratory disease but it’s the static noise that is the most serious.

I’ve only been living here for five years and I’ve had to get used to it. Sometimes, you can’t even attend to your patients because you can’t hear them. I myself don’t have the same hearing in my right ear as I do in my left, and that’s directly linked to the noise, because I work and live in a building opposite the plant. Living near it is awful. Even though I know how important it is, it’s just dreadful.” 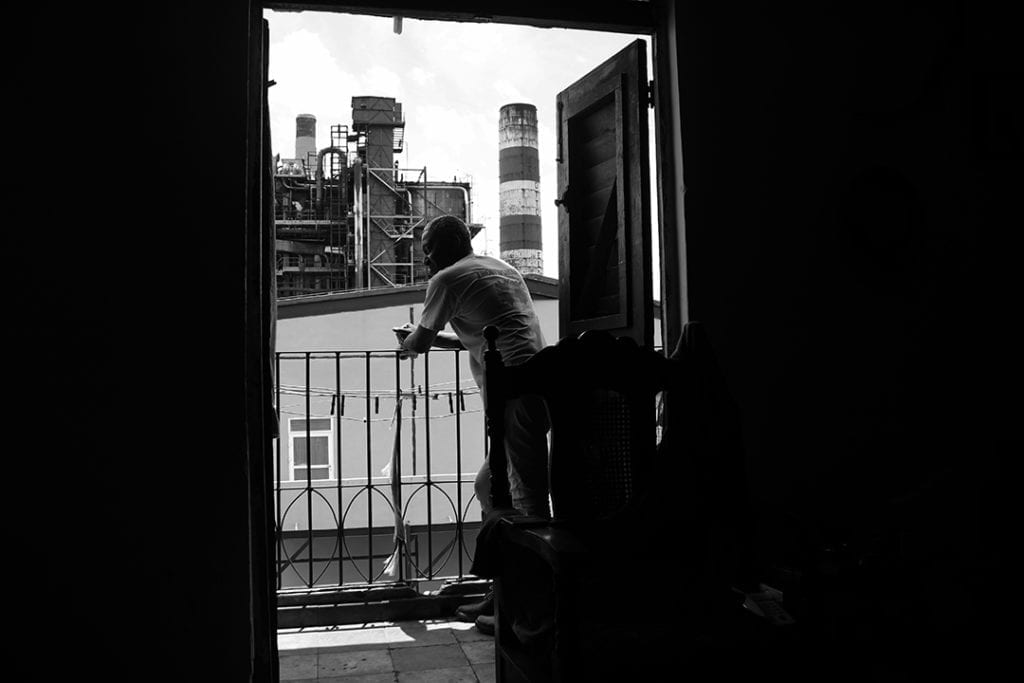 “This power station is a necessary evil. It was here before me, it’s already a part of my life. Now, they’ve built a new building and made other repairs, which means that they won’t move it outside the city anytime soon, like we’ve been asking for so long.

“When the noise is really loud, we turn everything off and sit down to wait for it pass because you can’t even read a book. You can’t concentrate. Maybe the only good thing about living right next to it is that the soot affects us less because the chimney is really tall and the wind carries it away, but then people living two or three kilometers away are affected.” 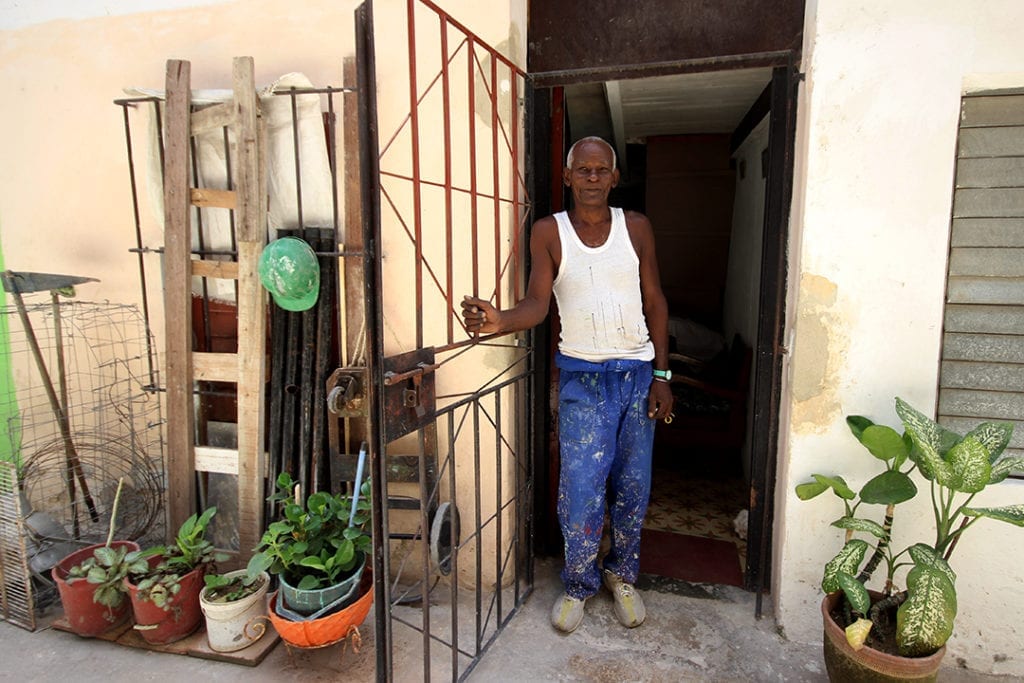 Leonardo Cevereco, resident at no. 218 Puerta Cerrada street, between Alambique and Florida:

“What’s the word for something that really gets on your nerve? Well, that’s what it is, that’s what living near the power station is… and I have not always lived right here, but I have always been within the area. The soot would sometimes reach Los Sitios, so I couldn’t escape the plant even when I moved there. Now, I’m living in Jesus Maria again with my wife and I don’t even hear the noise because you get so used to it.” 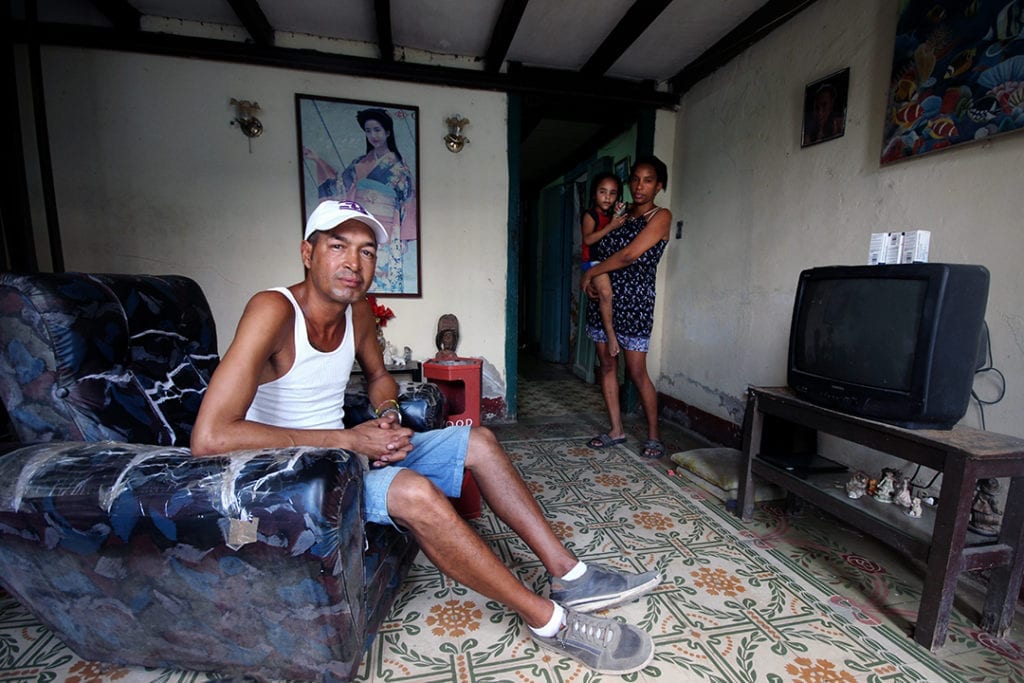 Alejandro: “Look above the TV. That’s my salbutamol for my asthma, which I’ve never been able to shake because of the smoke that comes from its chimney. Here, there is always dust and it doesn’t only make clothes dirty, it makes the entire house dirty. For example, I sell various things and I put them on display in my window. By the afternoon, when I pick up everything I haven’t sold that day, it’s all covered in a layer of black that makes my products look awful and nobody wants to buy them.”

Aimee: “The thing you’re hearing right now, it’s so normal for me.” It isn’t even noise anymore. You can’t imagine what real noise is when it begins to make noise! Plus, there’s no warning in advance, it could be in the morning, in the afternoon, or in the night. It never stops.” 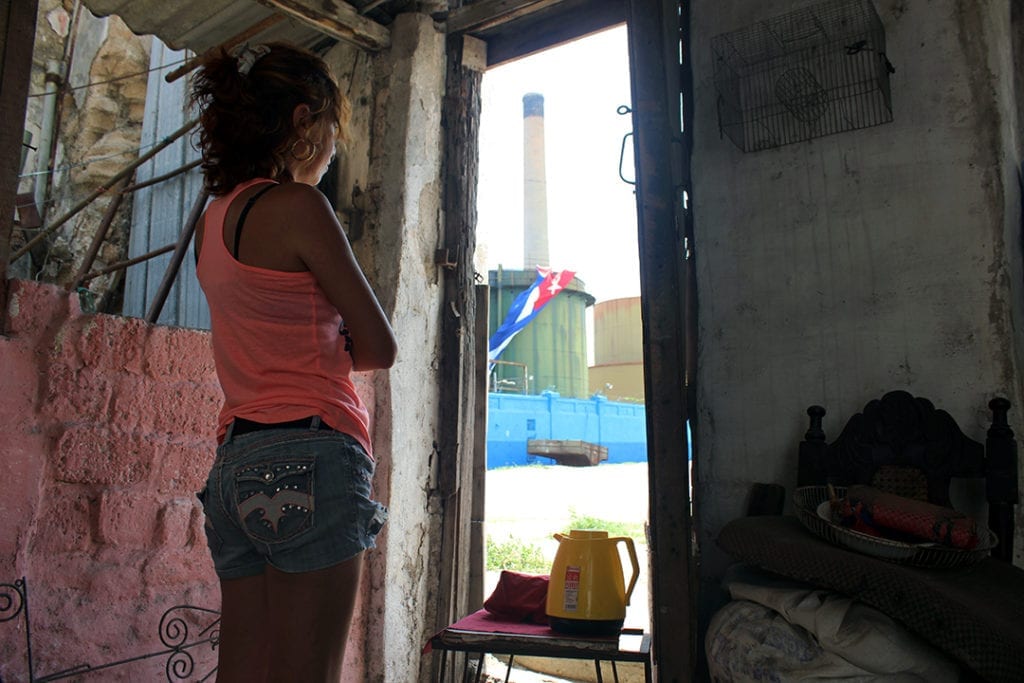 “I don’t know if it’s related or not, but almost all of the kids on the block have asthma. Leydis, my daughter, does. But, it’s the constant noise and I’m not talking about what you can hear now, but when they have to open a security valve and it’s such a high-pitched noise that it gives you a headache. “I’ve thought about leaving, but where do I go? I don’t have money to buy another house and there are very few people who want to exchange homes and move to this area with so many problems. People who move here find it hard to adapt, but for somebody who was born here, it’s just a part of your life.” 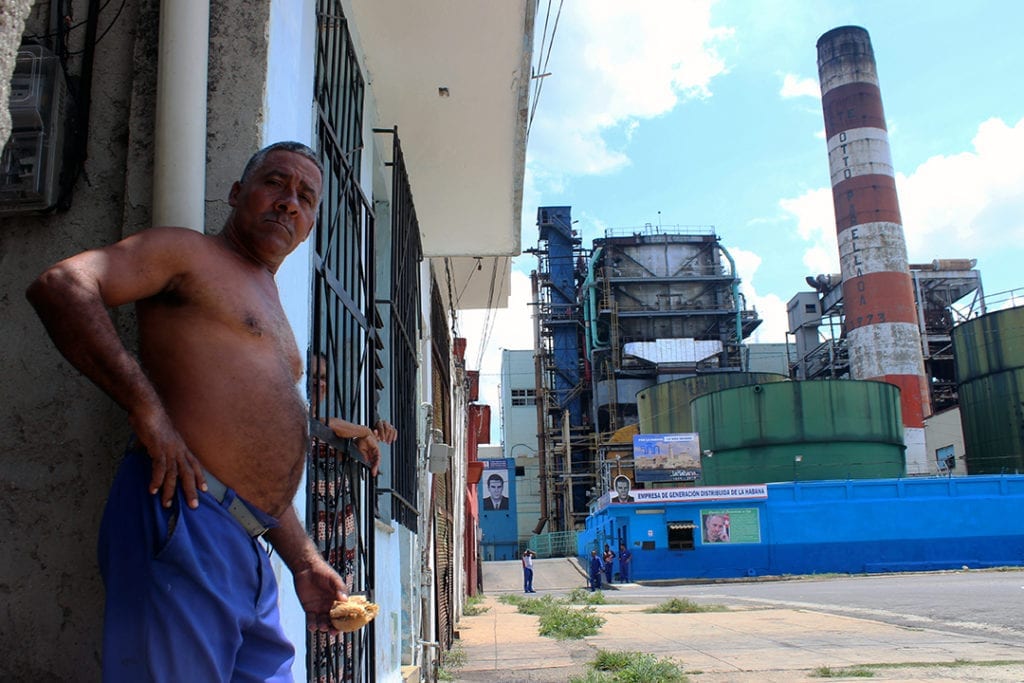 “Now, everything is shipshape, it’s calm, but when things get out of control and the commotion begins, well you already know, the whole of Havana hears it and no one can bear it.”