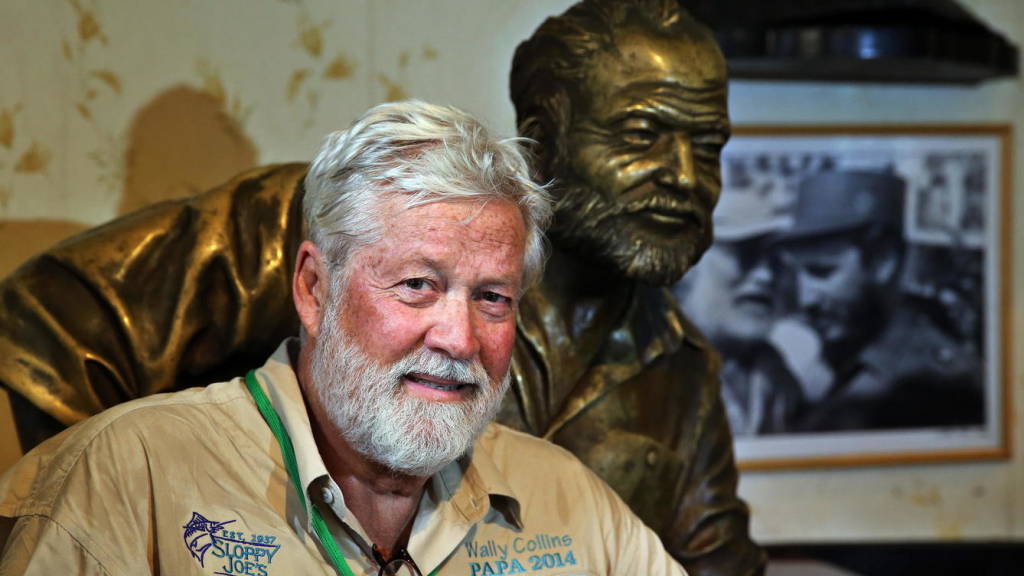 HAVANA TIMES — Wally Collins, winner of the 2014 “Papa” Hemingway Look-Alike Contest at Sloppy Joe’s Bar in Key West, is once again in Havana.

His presence at El Floridita bar causes a great stir among the patrons. Many people noticed he was there when he posed next to the Hemingway sculpture, a tribute to the American novelist authored by Jose Villa Soberon.

Collins explains that that Hemingway look-alike contest, which has been held in Florida for 35 years now, gathers 150 participants for a three-day event.

“I’ve taken part in six contests. You need at least 5 years of preparation. The competition goes beyond one’s physical appearance. Though some wear safari outfits and khaki pants, it’s not a performance or a show.

“The members of this club are part of a fellowship program that began in 1999. Since then, we’ve donated more than US $150,000 in scholarships for Key West students.”

Wally Collins, who lives in Arizona, attends the Ernest Hemingway Colloquium held every two years in Cuba for the second time. This time around, he delivered a highly interesting lecture on the novelist’s experiences as a social drinker.

“I feel very well here. I now know why Papa chose Cuba as his home for so many years. I’ve had a very intense life. I’ve gone around the world twice on my plane.”

“For 43 years, I was the owner of several restaurants. I consider myself an adventurer, just like Hemingway. I was in the Vietnam War, as an air force pilot. I am also a visual artist who works with ceramics.”

“I couldn’t miss this opportunity to come to Cuba and learn about Hemingway. When they find out I’m the look-alike contest winner, many people want to take pictures next to me,” he says, smiling.

Since 2012, the members of the Hemingway Look Alike Society have become the sponsors of Las Estrellas de Guigui (“Gigi All-Stars”), a baseball team created seventy years ago by Hemingway to give poor children the opportunity to play the sport with his younger son Gregory.

The team was brought back to life on the 80th birthday of Oscar Blas Fernandez, one of the first players, who “Papa” affectionately referred to as Cayuco Jonronero. The former field at Hemingway’s residence was also totally restored. On it, around twenty children played baseball.

An exhibition game with the newly-revived children’s team is scheduled for next December 5th. The day will also celebrate Hemingway’s Christmas tradition, complete with sweets, gifts for the children and a book reading.

“We’re trying to bring over sporting implements and baseball uniforms for the team. We also want to build a baseball field for children in San Francisco de Paula, in San Miguel del Padron, Havana.”

“Now that the Cuban and US governments are holding talks, everything is a bit simpler. The process is still very slow but there are good relations between the Hemingway Museum in Cuba and similar institutions in the US,” Collins points out.

11 thoughts on “Hemingway Double Hanging Out in Havana”