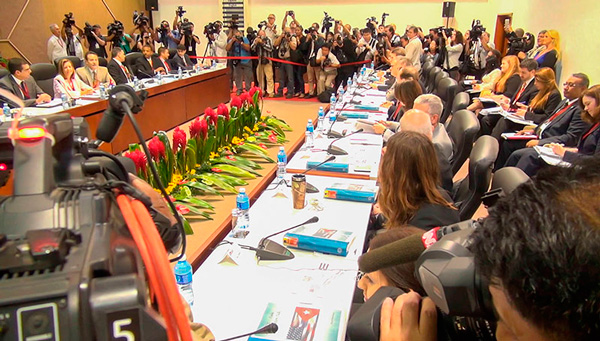 HAVANA TIMES — Roberta Jacobson and Josefina Vidal, diplomats from the United States and Cuba, respectively, decided to begin talks a day earlier than planned. After more than fifty years of confrontation, they decided to have dinner together at a private residence. Thus began the “public” phase of negotiations between Washington and Havana that were conducted in the utmost secrecy for 2 years.

Dozens of journalists from around the world were seen the next day when talks about migratory issues began at Havana’s International Convention Center. No significant changes were seen there: Havana continues to demand an end to the Cuban Adjustment Act and Washington insists it will continue to apply it. A Cuban diplomat summarized the situation saying: “we agree on what our disagreements are.”

The Cuban Adjustment Act grants permanent residency to all Cubans who arrive in the United States illegally. As Havana sees it, that legislation encourages illegal and dangerous forms of immigration based on human trafficking networks. Last year, nearly 25 thousand Cubans entered the United States through the Mexican and Canadian borders, after going through dozens of other countries in the hands of criminal bands. Other Cubans attempt to reach the United States using speedboats leaving from Florida or Cancun.

US delegates stated the law would remain in place but didn’t explain why they would preserve a piece of legislation that was conceived to aid those suffering political persecution and that today, in 90% of cases, benefits people seeking mere economic improvement. It may be that they fear the reaction of Cuban-Americans or a sudden rise in immigration, an issue that US officials did mention.

Following the agreement between the two presidents, the gathering aimed at re-establishing diplomatic relations was chiefly technical in nature. The two delegations, however, underscored that these would be based on the Vienna Convention. A Cuban diplomat told Publico that the US embassy should not intervene in Cuba’s domestic affairs, as the US Interests Section has done to date. Getting there won’t be easy: in Latin America, people say there are no coups in Washington because there is no US embassy there.

Different areas of cooperation, such as air safety, mutual coordination in the event of natural disasters, response to oil spills, cooperation in health initiatives for epidemics and the definition of marine borders in the Gulf of Mexico were ratified. Delegates also assessed the possibility of working jointly in the struggle against drug trafficking, as the island lies on the route between drug producers and the largest consumer in the hemisphere. This is an area in which Cuba has been offering aid for over a decade and that Washington had refused to consider until now.

The issue of human rights stirred up the most controversy. In a communiqué, the US delegation affirmed that they would “pressure” the Cuban government to improve its record in terms of freedom of expression and association. Josefina Vidal, however, insisted that those words were never used and that each delegation expressed their concerns regarding human rights and democracy in the other country. A Cuban official said that they would speak of human rights in Cuba but also about police brutality in the United States, the repression of demonstrations and the murder of African Americans by the police. At any rate, a bilateral commission to study the issue more in depth is to be set up.

Important issues such as the lifting of the embargo (which has been in place for more than fifty years and has cost Cuba billions of dollars) and the status of properties confiscated from US citizens and companies remain to be discussed. Cuba is still not authorized to export its products to the US or use its currency in transactions with third countries and is still on the list of countries that sponsor terrorism, facing all of the financial persecution this entails. The road to the “normalization” of bilateral relations is going to be very long and these are only the first steps.
—–
(*) Visit the website of Fernando Ravsberg.