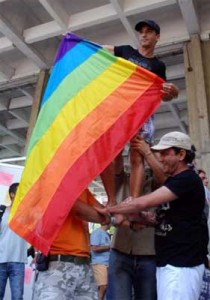 HAVANA TIMES (dpa) — Cuba’s homosexuals no longer need to fear being sent to labor camps, but they hardly have it easy on the communist island.

An ongoing census, set to conclude Tuesday, is currently causing a stir in the communist Caribbean island: gays and lesbians want to be statistically “visible” too, but the authorities are hardly receptive.

How many homosexuals are there in Cuba? How many same-sex couples and transsexuals? The census would be a good occasion to find out, well-known gay blogger Francisco Rodriguez argued.

However, homosexuality remains taboo, at least in statistical terms: the authorities want to hear nothing of counting gays and lesbians in the census.

“A chance is being wasted to show Cuba’s progress in the field of sexual diversity,” Rodriguez, 41, told dpa in Havana.

A journalist and college professor, he has fought for years for the rights of homosexuals on the island. Yet he remains loyal to communism and supports the regime founded more than half-a-century ago by Fidel Castro, whose brother Raul now leads the government.

Rodriguez thinks that the current census is discriminatory and homophobic, which he calls “unreasonable.” Through his blog, he launched a protest that he cautiously defines as an “educational proposal.”

The authorities have said that they intend to carry out a census among the homosexual community at an unspecified future date, but that is not enough for Rodriguez.

“The census reflects the reality of a nation,” said Rodriguez, who identifies himself as “Paquito” in his blog and beyond.

The census data is used late to guide government decisions and draft laws, he pointed out.

Homosexual couples should tell census employees that they are “in a relationship” rather than “single,” said Rodriguez, who himself has a partner of nine years.

He called on Cuba’s gays and lesbians to decorate their homes with the rainbow flag to clearly identify their orientation and has done so himself.

“Even if they don’t count our families, they should at least see them,” Rodriguez said.

“We have a right to be counted, to not be excluded for loving differently,” she said.

Mercedes lives with a woman who is 10 years younger. When census workers visited their home, she insisted that her criticism be recorded. The concept of “male head of the family,” as it appeared on the official form, was not applicable to their household.

Rodriguez asked for support from the National Centre for Sex Education (Cenesex), which is headed by Mariela Castro. The daughter of Cuban President Raul Castro has for years campaigned for the rights of homosexuals and even made calls to allow same-sex marriage.

Much has already changed in Cuba. Several years ago, hardly anyone contemplated openly coming out on the island. Until the 1990s, homosexuals were socially excluded: they got disapproving looks around the neighbourhood and even lost their jobs.

In the first few years after the 1959 Cuban Revolution, Fidel Castro went as far as to brand homosexuals as “counterrevolutionary” and had them sent to labour camps. He made it clear that such dissent was not tolerated in Cuban society.

It was not until 2010 that the Fidel – the Maximum Leader – expressed regret for his attitude and policies, and he described the decades-long persecution of homosexuals as a “great injustice.”

“If anyone is responsible, it’s me,” he said in a groundbreaking interview with the US magazine The Atlantic.

The Communist Party has even stated that it is in favor of allowing same-sex marriage, but the necessary legislation has yet to be drafted. Veterans of Cuban politics are apparently against the initiative – it is presumably too revolutionary, even for Cuba.

3 thoughts on “Homosexuals, Too Revolutionary for Cuba?”