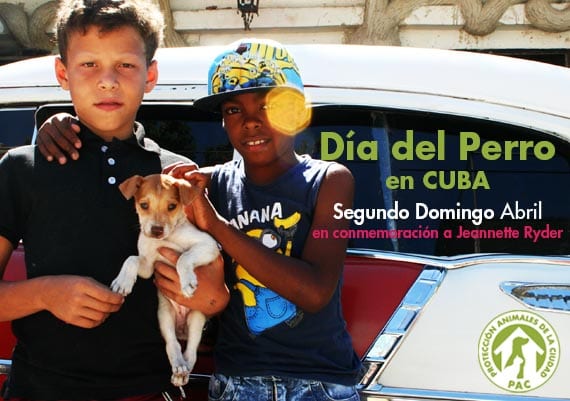 HAVANA TIMES — Last Sunday, passers-by on 23rd street, in Vedado, were surprised to see a group of people walking along the side of the road carrying photos of stray dogs on their chests.

The animal rights activists were handing out flyers to passers-by with the photo of a puppy and the slogan: “Saving an animal won’t change the world but it will change the world of THIS animal.”

The excellent and moving photos, which were also being worn, are part of an exhibition that has been on show on La Rampa for some time now, in coordination with Aniplant (the Cuban Association for the Protection of Animals and Plants). Jose Molina is the photographer and he was interviewed by Havana Times (“The Man who will never have a Dog”, interview by Yusimi Rodriguez).

This pilgrimage takes place on the second Sunday of April every year, convened by Aniplant and as a tribute to Jeannette Ryder, a US philanthropist who lived in Cuba and founded the Bando de la Piedad.

Concerned about the suffering of the helpless, this incredible woman took in helpless old people, children on their own, beggars, the crippled, senile, as well as abandoned animals.

She created free veterinary clinics, she stopped bullfights in Cuba, she stood up to cruel horse drawn cart drivers with arguments, without being led by her anger. Based on her spiritual vision of existence, she saw cruelty as an expression of selfishness and unawareness. She declared herself to be against dance academies, hidden prostitution centers and took pity on everyone, regardless of their sex, race, ethnicity, social class or species. 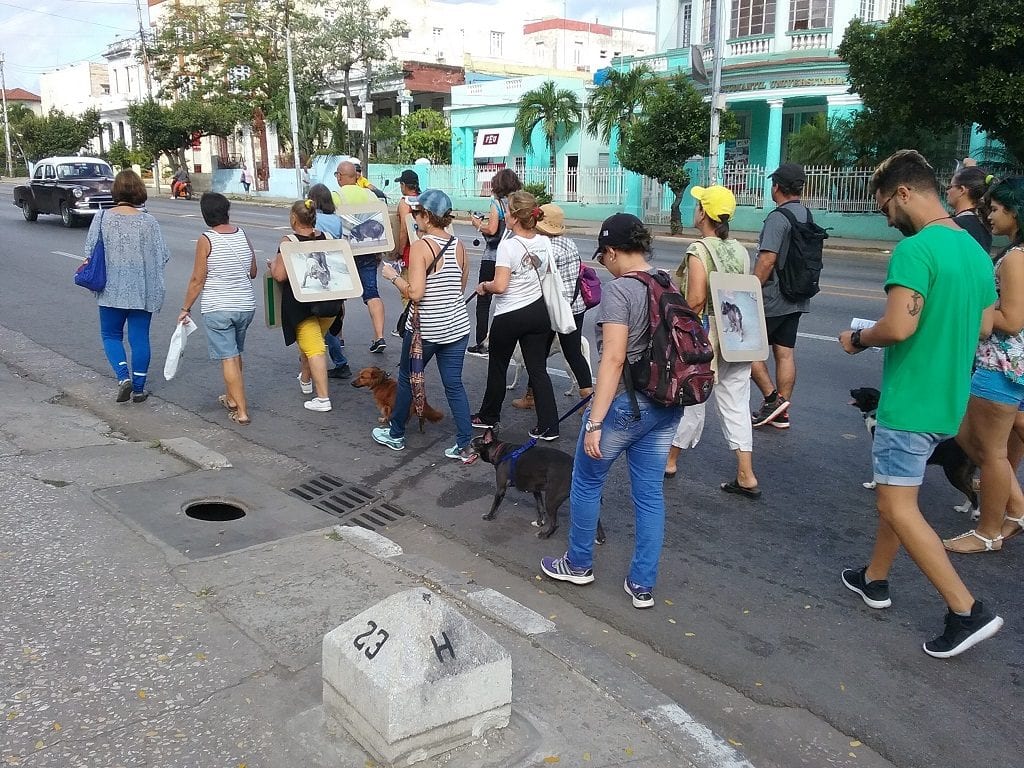 This is why the camicota (march with pets) ends at Colon cemetery where her grave and the sculpture that represents her can be found as well as the dog Rinti, who rests at her feet and refused to eat after she passed away, thereby dying at his owner’s grave.

With pilgrims standing together all around this grave, Guille Vilar, known for hosting TV program “A Capela”, spoke: “There are people who aren’t weak in mind because they do their job properly, but I would say that they are weak in their souls. They watch us carrying these posters with photos of dogs and they think: Look what these people are wasting their time on, and they don’t know that we are here for them too.”

Nora Garcia, Aniplant’s president, spoke about the need to increase sterilizations as a solution to the problem of abandoned animals suffering.

You could pick up on the tension of those present, most of whom were anonymous protectors who have been taking in dogs and cats that have been abandoned by others for years, healing them, feeding them, sterilizing them with their own resources. Standing up to abusers, to sadists, with only their hearts and without any support from the law, the absence of an animal protection act at this point of the Revolution being a disgrace for Cuban society. Receiving insults and watching how negligence is allowed and proliferates, deforming generation after generation, our children and youth.

Comments such as “laws are the only thing that prevent abuse,” “a law is the first step towards us becoming more civilized,” “a law and sterilization need to go hand-in-hand”, were heard.

When Nora said that stray cats could only go out to eat at night in the past, looking for food in garbage cans, “but now there are restaurants and people who feed them, which means litters and litters. They are killed, hanged, burned…”. A young woman replied: “That’s why we want a Law!” To which she responded: “A law won’t change people’s education.”

Amidst an outbreak of disorganized voices, you could hear comments such as: “The Law punishes and educates”,  “The Law helps us to co-exist”, “the Law prevents people from killing others, otherwise they would be killing each other still.”

Aniplant’s president added: “This can’t be turned into a protest, this is an event,” and a young woman asked: “When can we protest, then? We need a space!” “We are inviting people to work in the sterilization project,” Nora responded, “Jeannette (Ryder) had been sterilizing animals for 20 years when she died.”

And she concluded: “A Law is crucial, education is the key and sterilization will be what ends animal abuse. If there aren’t any stray dogs, Zoonosis trucks can’t prowl the streets. We will bring medicines, anesthesia and we will all work together.” When asked how they can work together, she answered: “Aniplant is opening up its doors to you. When they change the law to allow for associations, then fine, but right now there’s only one, that’s fine… I invite you to take an oath so that we can say next year that Havana is free (from abandoned animals).”

Nearly everyone clapped and an animal protector said she was very moved. Comments followed about how to organize upcoming sterilization campaigns.

Bearing in mind the fact that fragmentation is one of the evils that paralyzes us, the meeting at the foreign lady’s grave yesterday, who taught Cubans how to take pity a century agomight be the beginning of a synergetic uniqueness which the country urgently needs in order to become a nation. In order to begin defining ourselves as human beings.

Another first step would be to spread awareness about our history that’s been left out, about the merciful, non-violent altruists here in Cuba, because Jeannette Ryder’s life and work is an example of a leader who doesn’t impose themselves with military achievements and warmongering, but proves that “a better world is possible”, right now.

One thought on “Hope for Those in Cuba without a Voice”