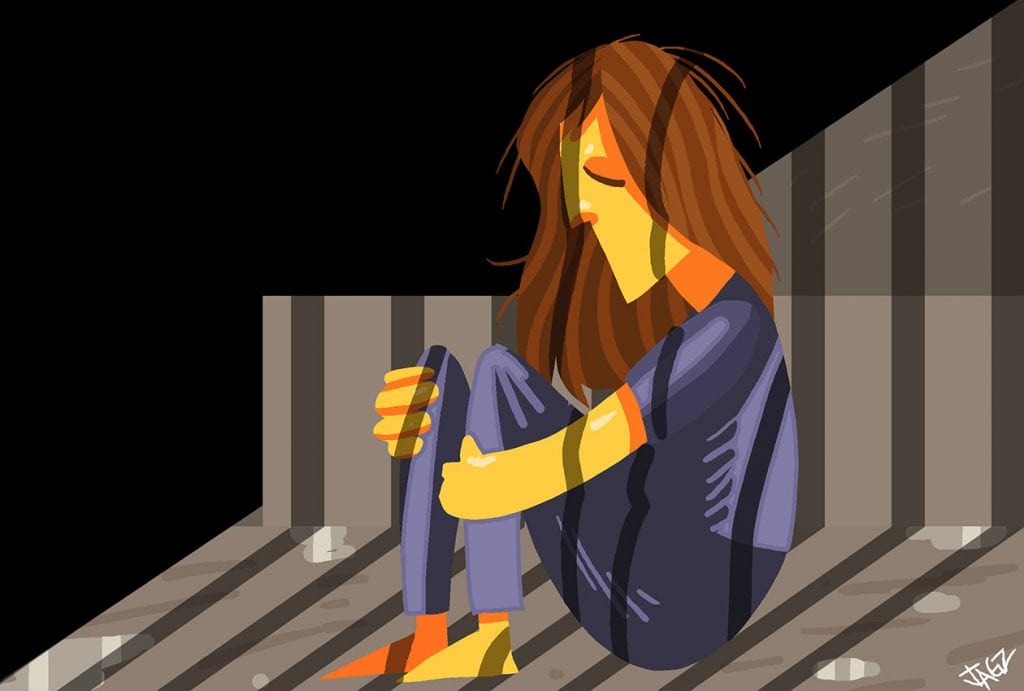 The dungeons of El Chipote where journalist Miguel Mora spent 35 days, and “the little hell-hole” he’s in now.

Jose Inacio Faria, deputy in the European Parliament: “The pigs in my country are kept in better conditions than that cell. It’s unacceptable, it’s shameful”

HAVANA TIMES – The cellphone flashlights blinded Miguel Mora. The deputies from the European Parliament had illuminated the cell to locate the imprisoned journalist in the darkness. Mora, a political prisoner of the Ortega-Murillo dictatorship, was in the depths of the cell, dressed in a blue prison uniform.

Almost a minute passed before the eyes of the caged director of the now-shuttered 100% Noticias television station could adapt to the light. Then he was finally able to see clearly the visitors with foreign accents who had entered his dungeon in the El Chipote jail, [also a favorite of Somoza, the previous dictator, for torturing his political prisoners.]

Jose Inacio Faria was one of the deputies filming the moment. The Parliamentarian’s cellphone flashlight laid bare the details of the cell where Mora had already spent more than 35 days in solitary confinement in El Chipote: the broken-down toilet and the filthy floor, full of plastic bottles and the remains from the containers that once held food. “I eat and sleep here,” the journalist explained to Faria.

The European deputies were astounded to learn that Mora had spent so much time in the darkness, without having access to fresh air. Inacio Faria inspected the cell minutely, lighting up corners with his cellphone, like a detective looking for evidence in the walls. He could only find “one small crack” in the cell through which “indirect light” could filter.

“Those conditions are disproportionally inhumane,” Faria stated to Confidencial after the visit of the European deputies to Managua. “Miguel Mora has a concrete bed with no mattress. The day we came to visit him, they put the uniform on him, because he spends his time in that cell in his underwear.

Almost blind from being kept in the dark

Mora was captured on December 21, together with journalist Lucia Pineda Ubau. The officials transferred them to the cells of the Directorate of Judicial Assistance, popularly known as the El Chipote jail, located only a few blocks from the shuttered studios of the 100% Noticias television station.

Mora and Pineda Ubau spent more than 35 days in solitary confinement. According to testimony taken by the European deputies, the news station’s director has suffered intestinal infections and episodes of trembling due to the unhealthy conditions in that dungeon and the lack of potable water.

“During the visit, we asked the prison’s director to take Miguel Mora out into the sunlight. He needs sunlight, vitamin D. He’s almost blind from being in the dark,” Faria asserted. “The conditions in El Chipote are subhuman – they’re inadequate for raising pigs. The pigs in my country are raised in better sites than that cell. It’s unacceptable and shameful,” Faria emphasized indignantly.

The three-day visit of the European Parliament representatives allowed Nicaragua to see the dictatorship’s political prisoners inside the jail for the first time. Although their visit to the jails yielded a number of videos documenting the health and condition of the prisoners of conscience, the visit of the deputies to El Chipote, and to the women’s prison known as La Esperanza where some 70 women political prisoners are held, was fleeting.

Inside El Chipote, the Parliamentarians were only allowed to enter the cells of the journalists from 100% Noticias. In La Esperanza, they were allowed to see the women who were being held as political prisoners, who told them of the physical and psychological mistreatment they have suffered. In this prison, the facilities are in better conditions, since it was more recently constructed. However, the women told of the poor treatment they suffered at the hands of prison functionaries, like the incident last October when men dressed in black entered their cell and beat up 17 of them.

Due to lack of time and a crowded schedule, the European representatives couldn’t stay longer in El Chipote or visit the El Modelo prison where the majority of the male political prisoners are being held. They wanted to go to Tipitapa, the site of this prison, because they’re aware of a countless number of complaints filed by the family members of the political prisoners in that prison.

Five days after the deputies’ visit, journalists Miguel Mora and Lucia Pineda Ubau had their long-postponed initial hearing during which the Ortega-appointed judge Henry Morales set their trial date for March 25. Following the hearing, Miguel Mora was transferred to the El Modelo men’s prison, and Lucia Ubau to the La Esperanza women’s prison.

In the “300”, the cells measure 6 feet by 6’. One or two prisoners barely fit, and the cells are as dark as the one that Mora occupied in El Chipote. A metal wall with barely a crack – less than 2 inches by 4” – allows only some weak rays of light to filter in.

In past years, before the current crisis began in April, the prisoners who spent time in the “300” described the cells as “little ovens” due to the heat that builds up in the reduced space. The imprisoned political prisoners also complain of the terrible ventilation of the space, well-nicknamed “the little hellhole”.

Confinement begins to cause psychological damage

Those locked into the maximum-security cells only have the right to come out every fifteen days. Family members of the political prisoners told Confidencial that the extended solitary confinement has begun to have its effects on the psychological health of the prisoners, although since being detained they’ve shown a tireless morale.

Carlos Brenes Sanchez, a retired Colonel from the Nicaraguan Army accused of terrorism and of promoting the roadblocks in Carazo, is being held in this “little hellhole”. He’s now spent five months isolated in maximum security. Since his entrance into the penitentiary, his life transpires within an area 2 yards long by 2 yards wide that make up this cell.

In the morning, he gets up to do exercises in the limited space. He has to do so to maintain his diabetes under control. He walks from one wall of the cell to another. The toilet where he must satisfy his physical necessities is right beside the bed.

Salvadora Martinez, the ex-officer’s wife, has managed to bring a Bible into the prison. Brenes Sanchez can barely read it in the shadows. Every 15 days, when they take him out to receive sunlight, he uses the time to read. “But, really, he’s kept in the shade, they don’t even give him access to full sunlight,” Martinez states.

The mold and the condensed damp in the small cell have left the skin of this seasoned ex-Colonel of 60-plus years, as rough as silt. When he isn’t walking from one side of his cell to the other, or trying to read the Bible, Brenes Sanchez strains his ears to listen to the sounds that reach his cell from a television set used by one of the guards in the “little hellhole”. It’s his only intermittent way of finding out what’s happening outside of those debilitating walls.

All of the political prisoners are kept isolated; beyond the ten-minute conversations they have with their family members during their family or conjugal visits, they have no idea of the evolution and the details of Nicaragua’s crisis. “It’s a barbarity,” laments Brenes’ wife.

This past Friday, February 1st, three retired members of the military – Carlos Brenes, Tomas Maldonado and Alfonso Morazan – were sentenced to thirty years in jail by the dictatorship’s justice system for the supposed crimes of terrorism and organized crime. Brenes was formerly a guerrilla commander of the FSLN, right-hand man of Camilo Ortega (Daniel Ortega’s brother) in the struggle against Somoza. Now with his more than 60 years, they’ve assigned him to three decades in prison.

One thought on “Inside Ortega’s Jailcells: “The Pigs in My Country Have Better Conditions””