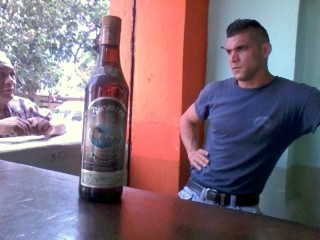 HAVANA TIMES — Every morning, I glance up at the shelf up on the wall. The 145-peso bottle of rum is still there, a layer of dust gathering on it. No one appears interested in buying it. “Godfather,” says the barman, “maybe I’ll be able to sell the bottle of Bucanero now that the Americans are coming.” The bottle costs what many Cuban worker’s make in two weeks. If Kerry comes meaning business, we could perhaps all enjoy the aged elixir.

“Only rain falls from the sky. In Cuba, you may get to see hail once in your life, but never snow and much less dollars.” Such the verdict of another patron enlivens the morning, while Granma and Juventud Rebelde, Cuba’s official newspapers announce the planed flag hoisting at the US embassy on August 14.

To the government’s satisfaction, the Havana carnival is now underway and masses of people are concentrated between Parque Maceo and the monument to the victims of the Maine. Beyond this point lies the unapproachable bastion of the US embassy. Everything is under control: people drink under the watchful eye of many police officers, police dogs and Big Brother’s cameras, scattered along the coastline, a mere 90 miles away from the northern neighbor.

In July, the Cuban government carried out at least 674 “arbitrary and politically motivated detentions,” the highest number since June of 2014, when 963 arrests were registered, the Cuban Commission for Human Rights and National Reconciliation (CCDHRN) declared in its monthly report on government repression.

The organization points out that it also documented “at least 21 cases of physical aggression and 71 victims of ‘public reprisals’ orchestrated by the secret police and paralegal agents.”

“Cuba’s dictatorial government continues to commit the highest figures of “brief,” politically motivated detentions in the entire Western Hemisphere, continuing to violate all civil and political rights and other fundamental rights as well. Nothing indicates this situation is going to change, at least in the short term,” CCDHRN told Diario de Cuba on August 4, 2015.

In the eastern province of Las Tunas, the official press could not conceal the death of over a thousand heads of cattle – capriciously owned by the State – as a result of malnourishment. The second-in-command in the nation’s one party insists that this is unacceptable; he scolds those below him and demands a full accounting.

Havana is putting on makeup. On Reina Avenue (officially Simon Bolivar Avenue), facades are being painted and outer walls covered with a new stucco finishing. Inside, the buildings threaten to fall over with a single shove.

Back in the neighborhood pub, the dust-covered bottle of Bucanero rum continues to glance at us arrogantly. It is not yet August 14, the Yankee flag hasn’t been raised on Havana’s ocean drive yet.

“Do you think I’ll be able to sell my bottle, journalist?” “Well,” I reply, “this is a neighborhood pub, I doubt Mr. Kerry’ll come here. For him, 145 pesos are a mere 6 dollars, less than an hour of minimum wage in his country.”

Philosophically, one can speak of one, two, three and countless Bucanero bottles, it’s of no use. The bottle will remain on its shelf, attesting to the clear difference that exists between high politics and the men, women, children, old people, dogs, cats and other pets in this universe.