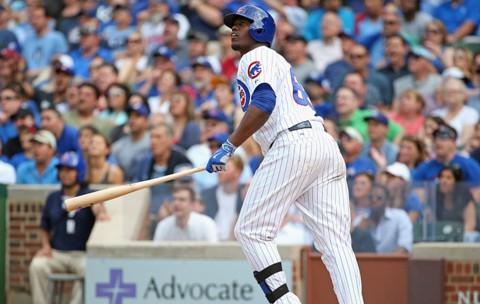 HAVANA TIMES — The beginning of the 2015 MLB postseason has brought a lot of thrills for Cubans from the bats of Kendrys Morales (Kansas City), Yoennis Cespedes (NY Mets) and Jorge Soler of the Chicago Cubs, the subject of this article.

The Cubs outfielder has managed to do what no other Cuban has done in major league history in his first three playoff games as a rookie, batting 1.000 with nine consecutive at-bats without recording an out.

Editors Note: Soler was unable to get a hit on Tuesday, drawing one walk, but he made the play of the game to keep the Cardinals from taking the lead. The Cubs went on to win 6-4.

Soler’s debut in the MLB postseason began with his return to the active list after appearing twice on the disabled list this year, lowering the results of his rookie year.

On Friday October 9, St. Louis pitcher John Lackey dominated the Chicago lineup in the first game of the Division Series between the Cardinals and Cubs. Going to his bench, Chicago manager John Maddon gave Jorge Soler a chance for an at-bat in the 9th inning and he drew a walk of closer Trevor Rosenthal.

A day later, Soler appeared in the starting lineup batting second and playing right field. The 23-year-old did not disappoint his followers and this time in his first at-bat off left-hander Jaime Garcia he drilled a double to left for his first hit of the postseason.

One inning later Soler belted his first homer in the Division Series, this time with a man on base, to seal an important five run rally that proved vital in his team’s 6-3 win.

Soler had two more at bats receiving a walk both times, in the 4th inning off reliever Carlos Villanueva and in the 7th inning against Seth Maness.

With the series moving to Chicago, Soler started once again in Game 3 on Monday October 12, batting second and playing right field. Once again his effort proved key in Chicago’s 8-6 win over St. Louis.

In his first two at bats against righty Michael Wacha, Soler received walks in the first and third innings. In the fifth inning Soler recorded a single against Wacha. A frame later he hit his second home run of the series, a two-run drive to left, also off the Cardinal’s starter, that gave his team a 7-4 lead.

To seal a historic performance in Game 3, Soler made the record books four times, one individually and three collectively.

The individual record was to reach base on his first nine at bats in the postseason, a mark that he can still expand and that was previously five. Collectively, he was one of the six Chicago batters who homered in this Division Series clash a record for any team in the MLB playoffs. The second collective mark is for being part of the eight homers connected in the game, including the two fired by St. Louis. Finally the third is for being one of the eight rookies who have hit a total of 10 home runs in this postseason, which breaks the previous record of nine.

In my review before the Postseason I pointed out that Soler should not miss any opportunity in the series and the Cuban has proved a huge stone in the road for St. Louis pitchers, unable thus far to get him out.

Among the many problems facing St. Louis, against the wall down 2-1 in their series with the Cubs, is how to stop the boy from Havana.

Here are the statistics on Jorge Soler’s performance in its first three games this postseason.