Ortega and Murillo’s delegate maintains his popular backing despite his transformation from a “close-by and open” mayor to an absentee one.

HAVANA TIMES – Every morning for weeks now, the speakers on the outside of the Matagalpa mayor’s office blast at nearly full volume, alternating songs of the Sandinista Front with Reggaeton music. Although his name is never mentioned in the repertoire, passers-by and neighbors know that the strident music celebrates the third consecutive candidacy of Sadrach Zeledon Rocha as Matagalpa’s mayor.

As the musical program begins, the morning is already stirring in the narrow streets of this city. On each corner, the fruit vendors offer local fruits: huge jocotes, mangos and “Chinese” mamones. The businesses are making their first sales of the day, the parking places are full, and in the mayor’s office the lines have already formed at the offices of the assessor and the window for paying taxes. It’s all the very image of a prosperous departmental seat: Matagalpa, center of production and commerce. No one seems to mind the music that at times becomes deafening.

Mayor Zeledon has his offices on the first floor of the municipal building. In this office the songs no longer penetrate at full strength. Four empty chairs, two desks and a portrait of Comandante Daniel Ortega occupy the entryway to his office where the secretary informs that “the mayor isn’t here.”

Ever since Sadrach Zeledon Rocha was also appointed as FSLN political secretary for the department of Matagalpa, finding him in the mayor’s office would be a matter of coincidence or good luck.  He doesn’t have any fixed time of arrival or departure. The four empty chairs in his waiting room are relics of a practice the mayor has lost: attending personally on Wednesday mornings to any Matagalpa resident who wants to present a request or ask for his help. The “close-by and open” mayor of the city’s population is a memory dating from 2001, when he assumed the position of mayor for the first time. His multiple responsibilities as political secretary and “trusted confidant” in this zone of presidential couple Ortega-Murillo, have transformed him into a slippery functionary, who barely lets himself be seen in his municipality.

Among the many hats he wears, Zeledon Rocha is president of the Association of Municipalities and a member of the Council of Local Governments.  The latter entity transmits the presidential orientations each week to the other Sandinista mayoralties, and demands their balance sheets.  Given his many party tasks, in Matagalpa they’ve given him the nickname of “the elder mayor.”

“Sadrach is a mayor who works for all the municipalities. He knows what’s going on in San Ramon, in Rancho Grande, Matiguas, Rio Blanco, notes Gerardo Molinares, a former Sandinista militant and a well-known figure in Matagalpa’s theater scene. “He’s been changing, but I think that it’s more a result of the many functions the central government has been assigning him.”

Sadras Zeledon has been seen leading Sandinista counter-marches in Rancho Grande, where a large segment of the population opposes government policy of allowing mining in the region. It’s said of him that he’s “The Man” for the Sandinista party in the department.  His figure as a power force rose definitively after 2008.

After his first term as mayor from 2001 – 2004, “Sadrach” (as he’s called with great familiarity in the streets of Matagalpa) couldn’t compete in the next set of municipal elections.  At the time, the law forbade concurrent periods for mayors, as it did for the presidency. Since his period in office was considered very positive, he returned as the very popular Sandinista Front candidate in 2008. Sandinista militants, together with those critical of his term and the citizens in general, all agreed that he has “brought progress” to Matagalpa, emphasizing the development of infrastructure: roads and housing.

The next year, in 2009, Zeledon Rocha, together with Daniel Ortega, signed the appeal against the Constitutional lock that prohibited reelection. From that time forward, he has accumulated thirteen years in government and the Sandinista Front has tapped him for the 2017 municipal elections as a candidate for the third consecutive time. Should he win next November, he’ll have a total of 18 years in power.

“Sadrach has been three different mayors in three different periods,” states sociologist Alfredo Ocampo, who worked in Zeledon’s initial administration.  During the first period ,according to Ocampo, he was indeed a “close-by and open” mayor. At that time, Comandante Daniel Ortega hadn’t yet returned to the presidency, and Zeledon operated with total autonomy.

Maria Auxiliadora Romero Cruz, founder of the Matagalpa Community Movement, also notes this. Her organization was born at the end of the seventies, during the armed insurrection that overturned the Somoza dynasty. During the Sandinista Revolution they collaborated with local institutions and administrations in the areas of health, public sanitation and education, the same general guidelines that they follow up through the present.  Initially, Zeledon’s arrival as mayor strengthened the working ties that the Community Movement had maintained with previous administrations that were “governed by the Liberal parties.”

Romero Cruz takes a moment to clarify that context: From 2008 on, when the government of Daniel Ortega began to overturn the municipal autonomy, the Community Movement could no longer attend the town halls – because they were eliminated in Matagalpa -review the budgets, or influence the municipality’s public policies. All collaboration with Mayor Zeledon was severed. The commissions for women, children and the environment in which this non-governmental organization used to have a voice, are no longer functioning – or, rather, Romero Cruz states, “they’re centralized.”

“During the first municipal governments administered by the Sandinista Front in Matagalpa, there was a lot of openness. The plans for municipal and departmental development were formalized, plans that we organizations from civil society helped develop.  But everything has changed,” Romero Cruz states regretfully. 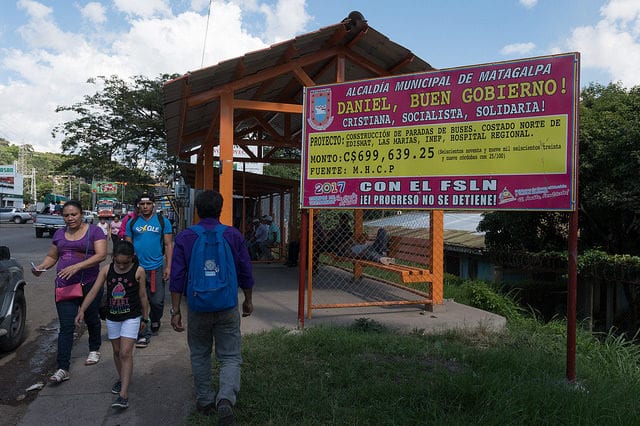 One example of the centralization of power in Matagalpa is offered by the signs that announce the public works projects in the different neighborhoods of the city. Those still standing that were put up previous to 2006 give all credit to “Sadrach, your Mayor.” The more recent ones attribute the projects to the national government of Daniel Ortega and Vice President Rosario Murillo.

This new style of government, a style that is repeated in the 140 mayoralties governed by the Sandinista Front, has dissolved the image of “Sadrach” open and close-by”. “Starting at four in the morning, people are standing guard by his house to try and talk to him, because that closeness in the mayor’s office has been lost. It’s something that’s very evident,” affirms sociologist Ocampo.

“Being political secretary has taken away his visibility and closeness with the citizens, because – whether we like it or not – these roles have two different aims. These other roles have kept him from being closer to the municipality of Matagalpa,” Ocampo judged.

In the streets of the city of Matagalpa, opinions of Sadrach Zeledon are favorable. Among both Sandinista members and non-members, there’s a consensus that “Engineer Sadrach” has repaired and created roads and constructed housing.

The strongest sympathy for Zeledon is among Sandinista activists. Even party dissidents such as Bayardo Siles, ex-member of the Sandinista Youth, recognize that the mayor “has charisma”. “When I was in the mayor’s office, I remember that he used to call everyone by their name. He’s a person who is well-advised and knows who you are and what your role is,” Siles recalls.

Zeledon is a long-time Sandinista militant. During the 80s he was department head of the now-defunct Ministry of Internal Trade that at the time administered the rations program. During the revolution, the mayor exercised power as a kind of departmental governor, something similar to his current rank of political secretary. He’s consolidated his leadership among the party ranks: several militants and ex-members of the party consulted by Confidencial assured us that in Matagalpa nothing “moves” without his authorization.

There’s no discontent in Matagalpa for the designation of Zeledon as candidate, as has happened in other municipalities and departments in the country. The fact that no surveys were conducted to have the party members ratify him, as the National Sandinista Congress has mandated, didn’t ruffle any feathers among the base. On the contrary, activist Ramon Ruiz Pineda admits with honesty that “this was a decision of the national party leadership.”

There are no objections to Zeledon being reelected for the third consecutive term, as has already happened with Comandante Daniel Ortega on a national level.  Although actor Gerardo Molinares considers that repeated terms “corrupt” and bring on “bad habits, nepotism and favoritism,” for the average militant it’s recognition of the mayor’s “efficient work”.

“He’s a very good mayor that we can’t change. While he continues to do his work well, we have no reason for change,” says Maria del Socorro Herrera, mother of Sandinista heroes and martyrs. 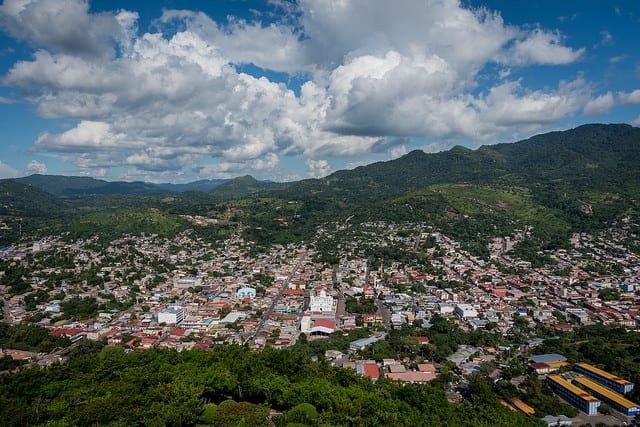 Luis Gonzalez, a farmer who says he has no party affiliation, finds himself torn when evaluating Sadrach Zeledon’s term in office and the prospect of his continuity. On the one hand, are the public works projects he’s carried out; “He gets an “A” on progress,” says Gonzalez; Nevertheless, in his opinion, “They should give others the opportunity to see what they can do. It’s been too much of the same.”

The late afternoon is quieter at the seat of the Matagalpa mayor’s office. The last rays of sunlight are fading on the façade of the municipal building. Martha Flores comes out of the office. Although she hasn’t seen mayor Sadrach Zeledon for months, she’s grateful for the paving stone road that replaced the rustic trail to her community in El Limito.