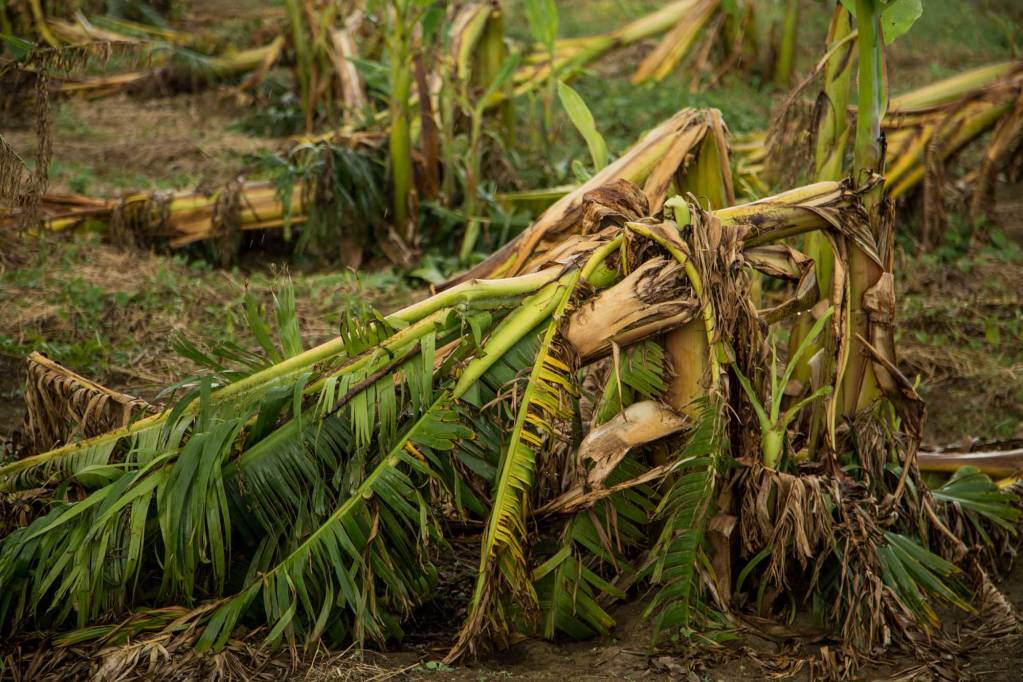 HAVANA TIMES — Hurricane Irma left Cuba via a point located 45 km away from Punta Hicacos. The province of Matanzas was severely affected, especially the Matanzas and Cardenas municipalities. Plus, damages were reported in Varadero, one of the country’s most important tourist resorts as well as in the farming Marti municipality.

An actor from the local theater group says: “Nothing happened in Matanzas. If anything, it just made the city a little uglier.”

A caretaker at Varadero tourist resort says: “The government asked us if we wanted them to send us help to pick up trees and the rubble. We told them no, that they shouldn’t be worried about us, that we would pick all of this up ourselves.”

A taxi driver says, as he passes through Versalles, a fishing neighborhood: “There was a scurry of snapperfish three days later. Monday, Tuesday and Wednesday. There were so many snappers and very little electricity.”

Javier Fal, a farmer in Itabo, says that Irma told him: “I’m going to grind you to a pulp.”

Near the Antonio Guiteras thermoelectric plant, nobody says anything but we can all see it. Trucks, cars, Transtur buses, yellow taxis. There are lots of people making sure that the thermoelectric plant is running.  Trucks are numbered. The last one I see has a sign which reads: “CTE 43. Hurricane Irma Recovery.”

First, Irma left via a point located 45 km away from Punta Hicacos, and the fishermen went after it. It’s a well-known fact that hurricanes bring in fish. And that’s why Rodolfo Garcia (Roly) and Yuri Rodriguez got onto their boat, the smallest out of the 20 that are kept at the Camilo Cienfuegos base and they went out to sea, until there was too many living snappers in the sea and too many dead snappers on the boat.

They had more than 200 pounds.

If you ask the fishermen, the snappers were a poor sale. Without electricity at home or in State fridges, prices fell to 8 pesos per pound. If you ask customers, who were buying 3 or 4 fish to cook throughout the day, this is the price it should always cost.

No boats were lost at the Camilo Cienfuegos base. Hurricane winds rocked them, sea waves entered via the river and reached the fishermen’s rooms. They knocked down the caretaker’s room, who was inside, to ensure that the damages accounted for the next day were effectively the result of the hurricane rather than to protect whatever there was to protect at the Base. Before the sea flooded the Base and the caretaker had to leave – because he had a feeling, in a flash of common sense, that a room made out of wooden boards and a roof made of whatever wouldn’t withstand the sea, winds and river -, Yuri returned and moored his boat for the second time, which had turned over.

Javier Fal talks about Irma in the masculine. “In real life, you only realize the damage done when a few days have gone by,” this farmer who lives in Zapato, a town in the farming municipality of Marti, says. He notes that the hurricane harmed “this corner” and he points to the 9000 trees that were his banana plantation. He also believes that Irma battered his plantation “because it wasn’t satisfied,” it turned around and said: “I’m going to hit you again, so you can see that I’m a real force to be reckoned with.”

However, statistics confirm that what happened on Javier’s plantation was normal, it wasn’t the exception.

You sow bananas because you love bananas. Firstly, because this crop takes a year to produce a harvest; secondly, because it requires a good investment to be able to buy plants, get rid of weeds and pests, to fertilize them and to irrigate the land; and thirdly, because it’s hard for them to withstand the strong winds of a hurricane or drought.

As beans and corn are short-cycle crops, people don’t really give them much care. Javier Fal had inverted 100,000 pesos into his plantation and he hoped to get 570,000 back. Out of the investment, 7% would go to the Cooperative. The rest was for the house. And when he says “house”, he’s referring – he emphasizes this to death – to one of his daughter’s sweet 15th birthday party.

Javier delivering the promised banana harvest would have worked out well for everyone. Figures of official farming losses, which are cold numbers on paper today, will become the tangible shortages in markets tomorrow. “The population’s demands won’t be satisfied in the upcoming months,” claims the report presented to the United Nations Office.

Nevertheless, the fact that Javier sows for his daughter, and that he also sows with his daughter, changes the landscape of his plantation for the better.

People say that family plantations recover from natural disasters much more easily. Obviously, because they are a family, a group of people who depend on each other. Because when Javier didn’t have the courage to go to the last line of banana trees, his father told him to walk a little more, that the last ones weren’t split into two. And there’s a significant difference between a broken banana tree and one that is lying down. The same difference between life and death. You can save a lying banana tree.

“We recovered two hectares of banana trees. We went tree by tree and we stopped, we put a little soil down, and a few days later, they were green again,” Javier says. Two hectares of banana plants are 3000 trees. Javier’s family has less than 10 members. The recovery process took three days.

“These trees are four and a half months old,” he says. “We’ll have bananas here again next year before any hurricane comes along.”

When they came to look for him to evacuate, Rosendo hid himself. And it almost cost this bus driver his life.

A few hours before the driver passed by his uprooted wooden house with a zinc roof, Rosendo had taken some fried fish, three bags of milk, rice and crackers to his cave, 2 km away from his home. The cave isn’t strange to Rosendo. He found refuge there when he was 29 years old and he decided to leave Versalles, a town in Matanzas, to go to the sea and fields. He lived there with Collar, his dog that had been trained to catch all the rabbits he could, but that “didn’t want anything to do with hutias.” There, he cooked Collar’s rabbits and his hutias.

He calls the cave “a safe place.” Which is why Rosendo isn’t afraid of hurricanes: because ever since 1931, he has been watching hurricanes and he has always tried to be in a safe place.

When Hurricane Irma hit the coastal town where Rosendo lives, which is called Finca Santa Teresita, the man passed by three unsafe places. A surge made him leave the first one, another surge from the second one, and a gust of wind that took off the roof and allowed a third surge to come inside. This was how day broke.

In a coastal area where, before the hurricane, there were a dozen stonework houses with owners that only used to come on the weekends on holiday. Now, very few people come: those who have homes still standing, come to see if anything that is worth rescuing is there; and those who don’t have homes standing or on the ground, are looking for what they can take to complete their own homes or sell on to those who have their homes on the ground in the next neighborhood.

The day of the hurricane, the bus driver who went to evacuate Rosendo, came back without him. The wind almost turned the bus over, the driver had to get out and go inside a nearby house. “This really saddens me,” the 88 year old man says, who is waiting for nails to come in so he can repair the roof on his house. Did it suffer any damages? He says none. That the hurricane took something from his home. Maybe the zinc sheets that his roof is missing. It’s hard to say because it doesn’t seem like the hurricane took Rosendo’s home; rather, it seems that the hurricane brought it and left it here in this place. But, as we are already in the recovery season, he is going to take advantage and “downsize”. Why do I need so much of a house? he says and he points to a angle where he is thinking of “cutting”.

In Matanzas, there were 2600 homes damaged and 200 total collapses.

The Antonio Guiteras thermoelectric plant was reincorporated into the national electric grid (SEN) on October 1st.

This work was carried out with support from Puerto Rico’s Center of Investigative Journalism.