HAVANA TIMES, May 9 – Since ancient times, humanity has venerated the maternal figure.  Different cultures, religious or not, celebrate maternity with cults of worship, carvings or simply in legends and myths.  Both men and women share a sacred vision of the being that gave them life.

In ancient Greece there was a period of spring dedicated to honoring the goddess Reha, wife of Cronus and mother of Jupiter, Neptune and Pluto.  The Romans chose three days in March to hold a similar tribute full of offerings to Sybil, goddess of nature and fecundity.

The Celts have a nice history of celebrations for their progenitors.  They dedicated one day to the goddess Bridget, to give thanks for the first milking of the season.

In America, long before the arrival of the conquistadores, the New World civilizations offered their own tribute to maternity through the goddess Coyolxauhqui, mother of Huitzlopochtli, the emblematic warrior of the Aztecs. As proof of their adoration, they improvised liturgies with abundant offerings of gold and silver with marked symbolism to the moon.

Many centuries later, Cuba did not escape these celebrations.  Beyond the adoration of the Virgin Mary, a symbol of the “perfect” mother, our country also offers special homage to the ranks of common, simple, mothers.

And really, it’s the least we can do, since Cuban women have had to confront some unique challenges, and they still face them, everyday.   Beyond the nausea and vomiting of pregnancy, the pain of labor, and the illnesses that small children are prone to, they must cope with one of the island’s most serious problems: feeding the family.  Many times in the dual role of both father and mother, she must satisfy the stomachs and physical needs of her son or daughter, according to the conditions in which they live.

During the last few years, the mass media have shed some light on one of the government’s concerns: the Cuban population is aging.  Many of the reports speak of Cuban women’s lack of interest in having children.  There’s been no shortage of expert opinions analyzing the role of women’s liberation in this attitude, as well as her work and studies outside the home.  It’s a complex topic, not one to be addressed lightly.

Progressively, over the course of many years, Cuba has devoted considerable and varied efforts to improving the health of pregnant women and the newborn.  The sustained reduction in the infant mortality rate is usually recognized as a measure of the success of this national effort.  Nevertheless, the fact that there is a decrease in the birth rate with respect to previous years is also a consequence of some objective facts.

Even in the most difficult years of the Special Period (early-mid 1990s) it was common to see young girls pregnant.  Now, however, they think more carefully about the decision to give birth or not.  Sensitive issues enter into this decision such as housing, nutrition, the material needs of the family, as well as the desire for a life with fewer worries, less stress. The majority of families live packed together in cramped houses or apartments.  Several generations spend their entire lives living together.  The space doesn’t increase, even though the members of the family do.

Alina, a mother of 4 children explains: “Look, it’s complicated.  I know that our country makes sacrifices for us, but it’s not enough.  We women have many problems some of them having to do with pregnancy, but other not: from the poor quality of the sanitary napkins to the lack of fruits and vegetables that are essential to the diet of pregnant women.

“When these products do appear, they’re too expensive to buy with the recommended frequency.  You can go crazy trying to put together the layette for a baby.  What mother doesn’t want to have pretty things for her children?  But those pretty little things cost you your eyeteeth. What the State gives you for your baby is ever less and less: 10 meters of cloth for diapers, 10 diapers of sterile cloth, one baby sheet, two large towels, two baby bottles, a little pair of underwear for either a boy or a girl, two pairs of shoes and a set of hygiene products consisting of two bars of soap, a small bottle of baby oil and one of skin cream.

“Oh, and a little rubber toy.  Everything is of poor quality.  Two months later you have to go running around to buy everything new for the baby.  Then you can’t buy it with the currency you get for your salary, but you have to use CUCs, the other currency.  It’s a big dilemma.  I remember that in the eighties you’d receive a beautiful set of baby products, there was some of everything. Life was easier then.  But now, the woman who gives birth knows that she’s going to have her work cut out for herself.”

Amelia, a twenty-seven year old journalist, confesses that for now she doesn’t want to take on any greater responsibilities.  “I know it sounds a bit selfish, but that’s how I feel.  I want to be free as a bird, to enjoy life.  Other times may come later.”

Many young women, driven by the economic situation, have gone off to live in other countries where they must face new customs and new laws, as well as form new friendships.  Some have children in those places, trying to form a family even though the roots of that tree may be a little dispersed.

Yordanka Oliva is a young woman of 28 who works in a bank. She doesn’t have any children and doesn’t know if she ever will.  “I’d like to, but I’m still young.  Also, when I got together with my boyfriend I already knew that he didn’t want any.  And he’s right: we live in a world so corrupt that it doesn’t seem right bringing an innocent creature into it to suffer for our selfish whims.  We’ll see.

“We’re going to be married in August – I’m inviting Havana Times.  It’ll be a seaside wedding.  We’re very romantic, and because of that I don’t want to be selfish.  I’ll have to think things over carefully when the moment of decision comes.  Life is in no way easy for children or for their parents.  We ourselves don’t have any serious material problems, we live by ourselves and we work.

“The thing is, my son or daughter will be attended by a nurse still in training, he or she will be educated by a teacher in training, and who knows how many other emergency programs for supplying professionals may arise while they’re growing up.  And let’s not even talk about the fact that human beings all over the world are living in a constant state of aggression and uncertainty.  I don’t want that kind of life for my children.”

The Ministry of Public Health assures free immunizations to all newborn children, regardless of race, sex or place of birth.  Before leaving the hospital, all babies receive the BCG vaccination which protects against tuberculosis.  When they’re between a month and forty days old, the pediatrician orders the first dose of the triple vaccine which protects against diphtheria, tetanus and whooping cough.  There are three doses of this vaccine, given approximately 30 days apart.  The booster shot is given one year from the initial dose and again at the age four.  Then there’s the sugar cube for polio, and that’s given after the first month, according to the dates of the large-scale vaccination campaigns.

Even so, other realities discourage the general population of women on this island.  The fertile years are limited and not all of us decide quickly to take on the responsibility implied in having a son or daughter.  Some wait to graduate, then later want to work for awhile to save some money, something that turns out to be almost impossible. The majority of the children who are born have been conceived by accident, through carelessness or lack of protection.  They’re not the fruit of careful planning because when this happens, maybe they never arrive.  Our material conditions put the brakes on the desire to reproduce.

Elvira, a worker in the construction industry, tells us that they held an assembly at her workplace to debate the proposed law to increase the retirement age.  “The majority weren’t in agreement with this.  The conditions of our life and work don’t lend themselves to such a measure.  But that’s when I realized that this business of the birthrate was real and serious.  I’m married and like all women I’d like to have at least one child, but I depend on my husband economically, since his salary is better than mine.  If we were to get divorced, I can’t be sure that he would pay his monthly quotas of child support.  A law exists in Cuba regarding this, but the everyday reality is that there are no mechanisms for assuring compliance.  If a father doesn’t want to pay child support, he just doesn’t and that’s that.  You’d have to initiate a whole legal process, and we’re not accustomed to doing that here.”

For Cubans of both sexes, the mother is regarded as holy, with no defects. She can’t be portrayed negatively in films or soap operas; she’s a person who never complains, and is always ready to devote her full efforts to her children.  As a result, it’s not uncommon to hear little children playing house and saying: “You can’t get tired, because you’re the mother.”

Our country celebrates Mother’s Day on the second Sunday in May, the month of flowers.  No one knows why, but the whole thing has been converted into the official day of kitsch, or bad taste.  Do our mothers deserve such awful cards, perfumes of such poor quality and those very plastic flowers?

They’re the ones who sustain the majority of the family nuclei, those who carry on their shoulders the education of their sons and daughters, as well as the care of the elders.  Our mothers deserve all our love, and not just in words and only one day a year.  Our mothers deserve our double respect – for giving life and for being Cuban. 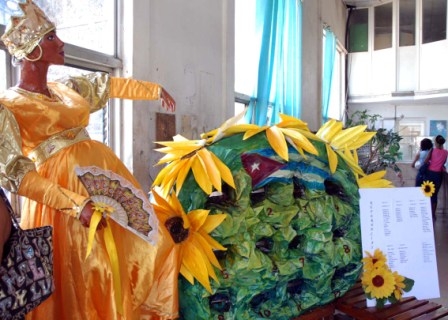 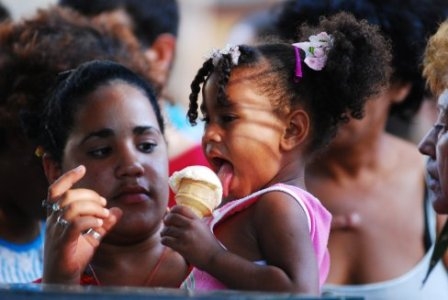 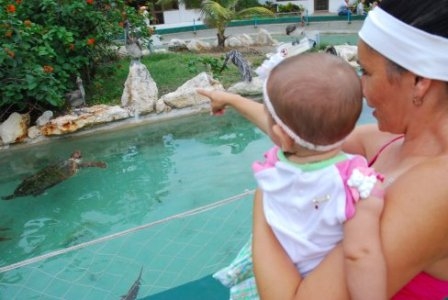 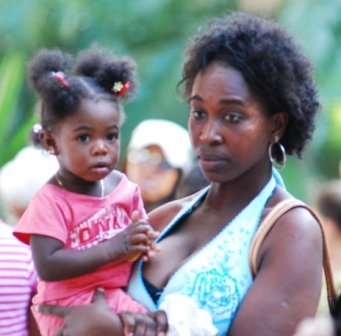 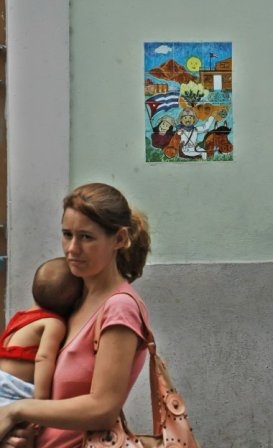 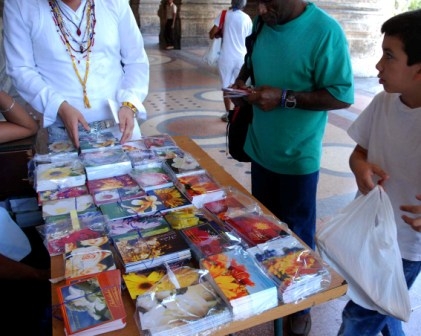 3 thoughts on “Mother’s Day in Cuba”