Citizens protest in the Managua cathedral, one year from the date of an Ortega-directed Mother’s Day massacre on May 30, 2018.

HAVANA TIMES – This year’s Mothers’ Day in Nicaragua was dedicated to the young people assassinated by the Ortega Police and paramilitary forces during the civic uprising of 2018. Dozens of citizens, most of them dressed in black as a sign of mourning, came to the Managua Cathedral where a mass was celebrated for the first anniversary of the killings at the May 30, 2018 march. Eighteen Nicaraguans were fatally shot that day around the country with around two hundred wounded.

The mass was organized by the April Mothers’ Association, a group that brings together family members of citizens killed in the context of the protests. Those attending carried black crosses, blue and white flags, black balloons and photos of the fallen. In addition, they hung four banners in front of the cathedral with the names of the [at least] 325 people killed by the regime.

Many mothers couldn’t contain their grief and wept when they saw the photos of their sons. On the east side of the church atrium, a small altar was set up with the photos of some of those killed, grouped according to the month in which the victims had been assassinated. Flowers, black crosses and candles adorned the images.

A number of the April Mothers entered the Cathedral together, carrying candles and photos of their children. As they passed, the congregation applauded and shouted: “Justice! Justice!” The mothers were seated in the front pews.

During the homily, Franciscan priest Silvio Romero stated that Nicaragua is “in the midst of labor pains” and exhorted those present not to see death as an end, but to think about the resurrection.

Following the ceremony, the worshippers gathered in the front patio of the church and shouted slogans against the regime of Daniel Ortega and Rosario Murillo. They formed small groups demanding justice, freedom for the political prisoners and the departure of the ruling couple.

The slogans most often repeated by the demonstrators included: “Justice!” “They were students, they weren’t criminals!” “Freedom!” and “What we want on this 30th of May is for Daniel and Chayo to go away!”

The metropolitan cathedral has become the only place where residents of Nicaragua’s capital city can come together in large groups to protest peacefully against the regime; if a citizen does this on the streets, they’re arrested by the National Police although this is a right established in the Nicaraguan constitution. 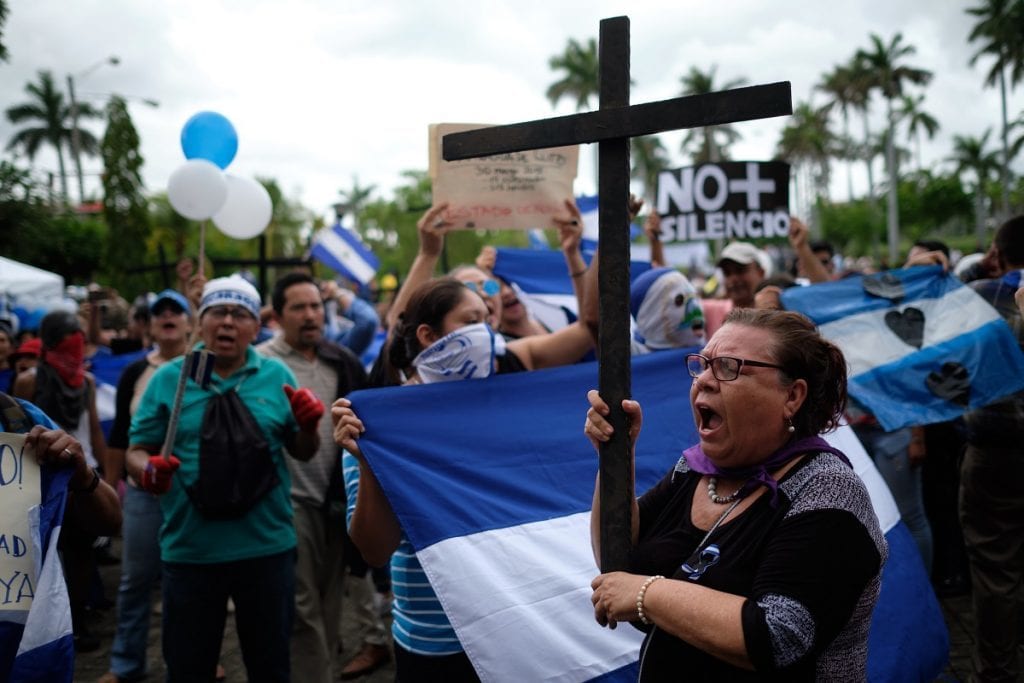 Protests were also held in other Nicaraguan cities to commemorate those killed during the Ortega-directed massacre on May 30, 2018. However, these dissenters were surrounded and harassed by Sandinista sympathizers and National Police.

In Matagalpa, the demonstrators canceled a protest in the atrium of their Cathedral, after Ortega fanatics came to insult them, guarded by the National Police who surrounded the temple.

In Managua, the National Police ordered an extensive deployment of riot squad agents, groups specializing in combatting organized crime and elite units of the city, with the objective of suppressing any demonstrations against Ortega.

The police activity was most intense in the area around the Managua cathedral. Patrol vehicles full of agents, riot police on foot, and traffic police surrounded the perimeter around the temple, as well as a number of pick-ups that were constantly patrolling the area.

Workers from the Pellas building held a flash demonstration in front of the police, singing the national anthem and waving the Nicaraguan national flag.