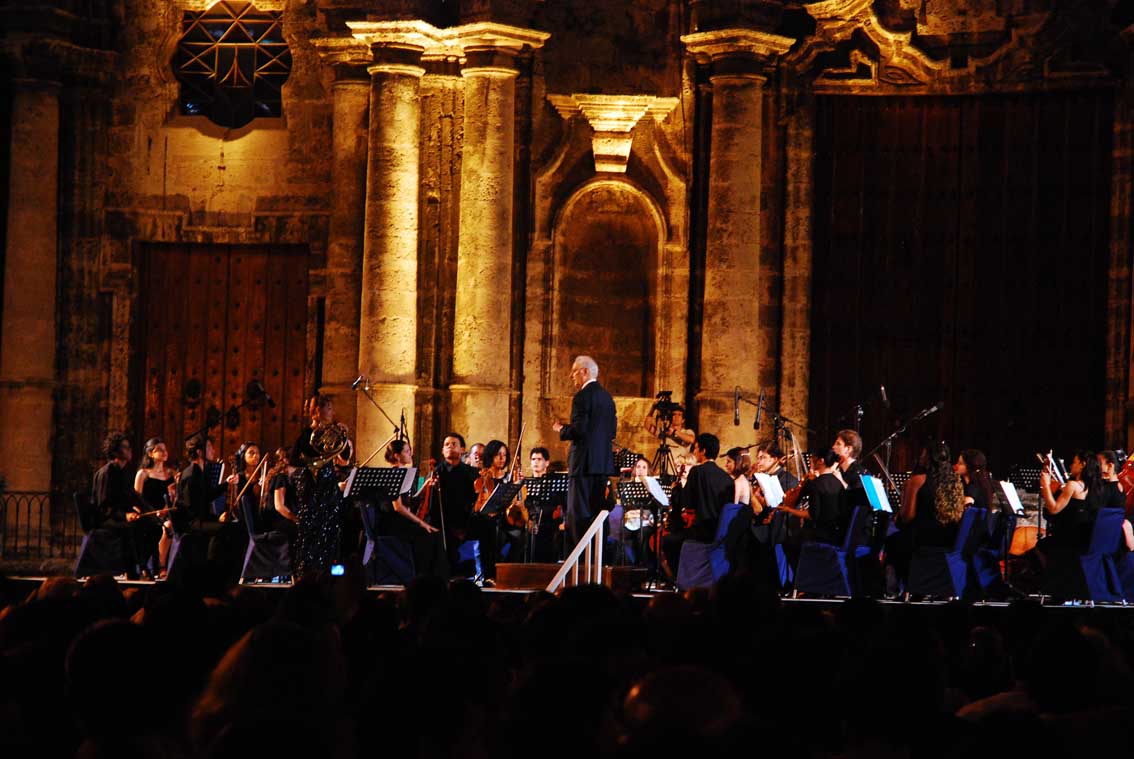 HAVANA TIMES, March 1 — The night was cool.  And though you couldn’t see many stars in the sky, in the setting improvised for the occasion a youthful energy pulsated through compositions crafted long ago.  Precisely at the 9:00 p.m. sounding of the nightly Havana Bay canon, the evening concert began.

This was how the orchestra from ISA (the Superior Institute of Art) celebrated its first two years of existence.

Electric guitar amateur Manuel Alejandro commented, “I’d never heard of this orchestra, but I love the joyfulness with which they play Mozart; with their youthful spirits, the musicians give off a good energy.”

This past Friday (February 25), anyone walking down the cobblestoned streets of Old Havana could discover the Cathedral adorned with yellow lights that created a solemn atmosphere.  A group of seats had been set up so that the public could relax and enjoy the concert, but most people didn’t make it that far; they ended up sitting under the porticos or just standing. 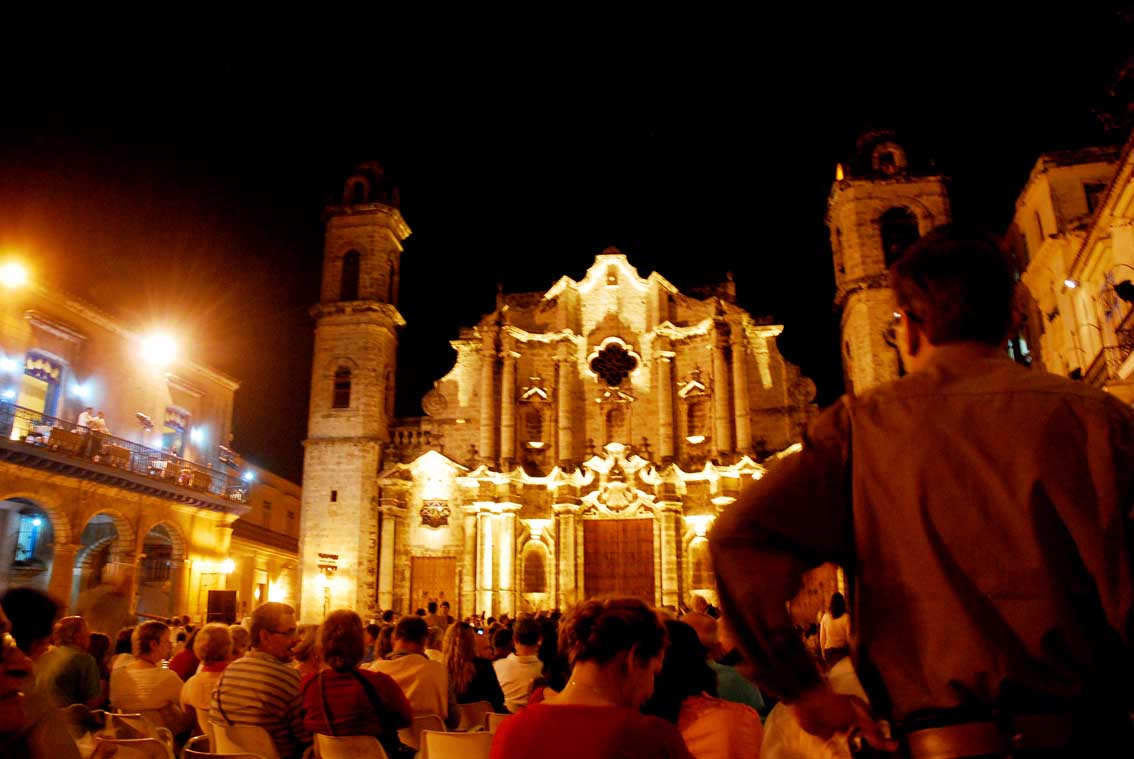 “It doesn’t matter.  I didn’t even know there would be seats.  What’s important is not to miss this event, an outdoors symphonic concert, it’s marvelous.  I’m 19 and I told lots of my friends to come.  I’ve been here a while now, but I don’t see any of my people, but I’m not leaving because since the very beginning everything has been absolutely beautiful – it’s a great atmosphere.” This was what was said by Yanara, who preferred to stand the whole time and not let anything escape her senses.

A voice broke the harmony of the night, or perhaps gave it a different touch: “Here you go! Turnovers – with guava, coconut or meat!”  A vendor pushing his cart took advantage of public turnout to hawk his different snacks.

“It’s not the same.  Here, there’s always traditional Cuban music.  That’s what you hear most in Old Havana, but this is pretty, especially the last one,” said another listener.  He was referring to the 5th Symphony in D minor, Opus 67, by Ludwig van Beethoven. 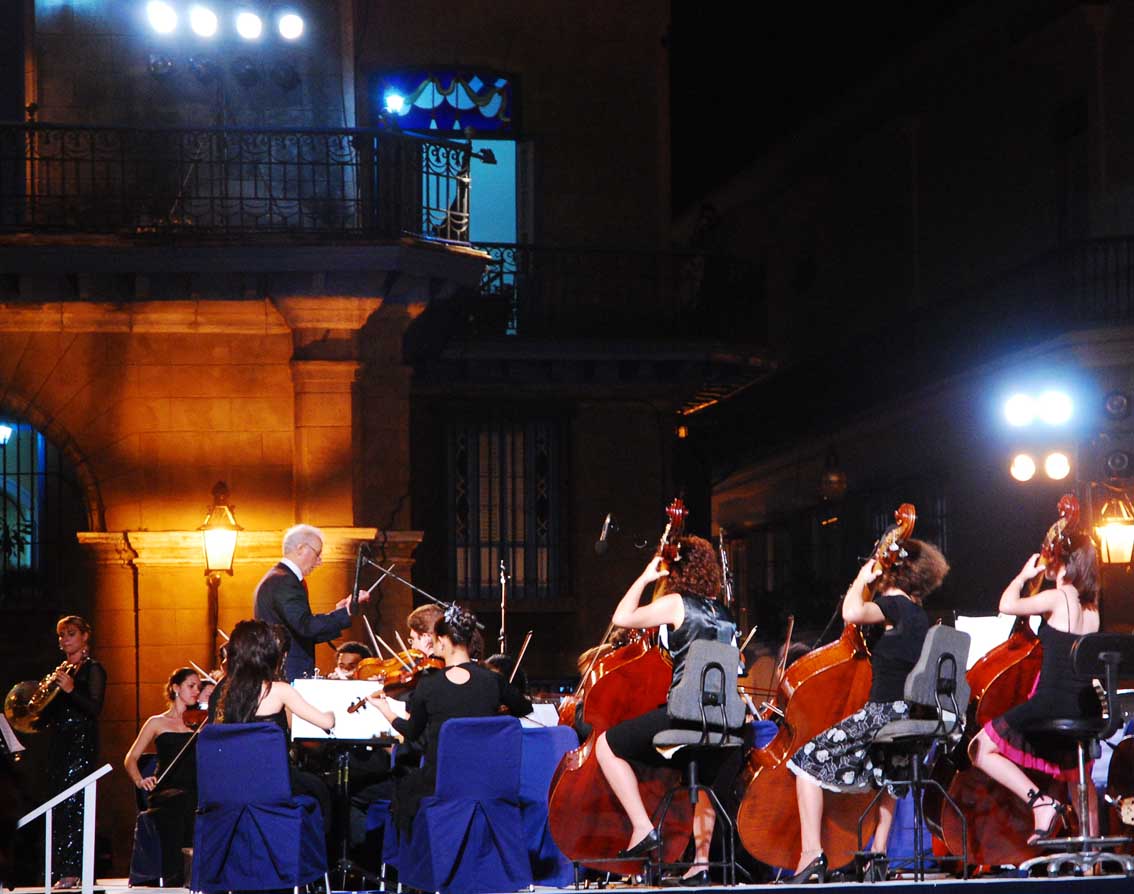 Prior to that, the orchestra had played Symphony No. 34 in D minor K. 338 and the Concert for English Horn and Orchestra K. 417, interpreted by soloist Debbie Velez (English horn), both by Mozart.  The symphonies were seamed together by the laughter of children who were playing on a colonial balcony on the side of Cathedral Square, still tinged with the elegance of the yellow lights.

The diverse audience seemed satisfied.  Only Armando, a man with white hair, made grimaces when people applauded between an allegro and an andante in the second symphony.  “You’re not supposed to applaud yet,” he grumbled while covering his head in his hands.

It was a pleasant night to remember, where young kids, teens and adults united in silence to enjoy classical music in the historic center of the city, and without paying a dime.

One thought on “Mozart & Beethoven in Old Havana”