HAVANA TIMES – Mónica López has documented four years of the legal battle to overturn the canal concession awarded by Daniel Ortega to Chinese magnate Wang Jing.  This concession, for the construction of an Inter-Oceanic canal in Nicaragua, was sealed into law in 2013 by the rubber-stamp National Assembly.  The law was passed with no public consultation and almost no discussion.

The years-long opposition effort has now been recorded in a book: “Delivering up a country: legal files on the canal concession.” In addition to compiling legal documents, it provides a written chronicle of the rural struggle against the canal construction, which gave rise thus far to 87 marches in different zones of the country that would be affected by the gigantic project.

The book was presented by the author, accompanied by Francisca Ramírez, leader of the farmers’ movement and the figure at the head of the marches.

López assured that the book “is the compilation of four years of work, and of legal and political actions that we’ve carried out together with the farmers’ movement for the repeal of the canal law.”

In addition to images of the 87 marches that the farmers’ movement has held, the book includes legal documents such as the proposed citizens’ initiative that collected 35,000 signatures requesting the repeal of Law #840 (canal concession law); documents requesting information filed through the Public Information Access law; appeals of unconstitutionality that they filed with the local authorities; and the documents that were introduced before international bodies like the European Parliament.

All of this is meant to document the fact that the only answer they received from the Nicaraguan authorities was silence.

“No one can say that this movement hasn’t used up every one of the civic options permitted in this country.  The reply that we’ve received from the authorities has been a constant closing of the doors.   It’s very sad, and at the same time dangerous, because the government is backing the farmers’ movement ever further into a corner,” Lopez stated.

Police repression against the farmer’s movement

Francisca Ramírez, leader of the farmers’ movement, expressed that they’ve been pursued, blockaded and intimidated by the National Police during the protests.  These police actions have also left a human toll in the form of three people who suffered serious wounds: one lost an eye, another an arm and another was left with intestinal problems as the result of a blow to the stomach. 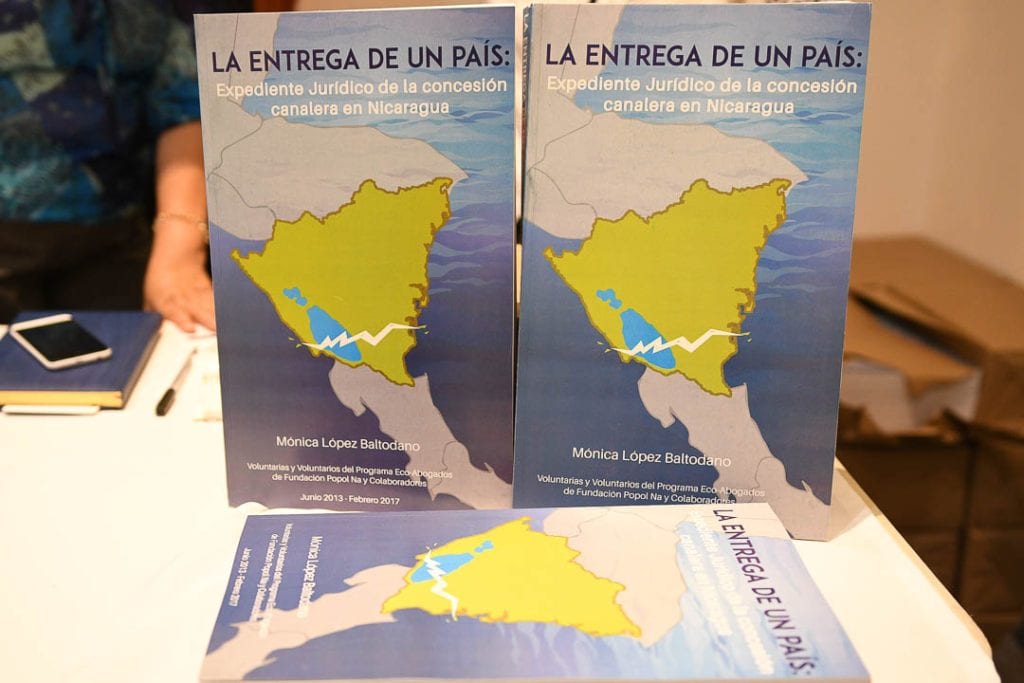 Nevertheless, Ramírez feels that such things only strengthen the rural movement that is fighting not to lose their lands through the concession that Ortega granted to Chinese magnate Wang Jing.

“This [book presentation ceremony] is a reunion.  We feel that after four years it’s a victory to celebrate.  Despite the fact that they’ve taken away our right to protest, at this moment we’re celebrating,” Ramírez told Confidencial.

The woman, who recently denounced the fact that one of her sons suffered a threat on his life after march #87 against the canal project, also recalled that the government at one point took away the trucks she uses in her work as a form of intimidation.  When returned, some of them had developed mechanical flaws that she was never reimbursed for.

Even so, she says: “We’re not losing; we’re demonstrating that in this country the Constitution isn’t respected.  We see that there’s no freedom of expression here, and we’re going to keep on fighting more every day.”

Vilma Nuñez, director of the Nicaraguan Human Rights Center, recalled that Baltodano’s book also reflects the efforts that different organizations from civil society had carried out in support of the farmers’ struggle.

“In an orderly fashion [Monica] clarifies in these pages what one portion of a persistent struggle of the rural movement has meant over four years.  This is the most authentic, combative and belligerent movement that has been generated in recent times,” Nuñez expressed.

Monica López’ book is available for purchase at the Popol Ná foundation at a cost of 500 córdobas [US $16.75].