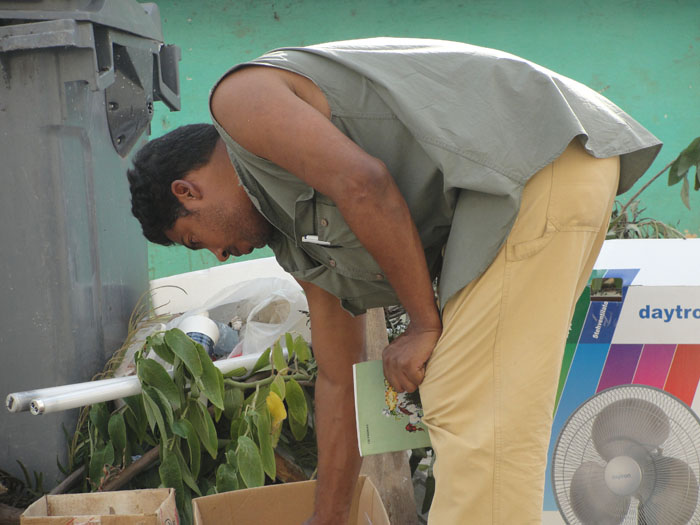 HAVANA, Sept. 22 (IPS) — Men representing an array of sexual identifications have organized in Cuba to defend sexual rights and promote respect for “other masculinities,” with the belief that greater visibility is needed to achieve true social change and acceptance.

Hombres por la Diversidad (HxD, Men for Diversity), a group “for the right to free sexual identity,” promotes social transformation and “works along the lines of education and advocacy for sexual and reproductive rights,” coordinator Alberto Roque told IPS.

HxD stands out in this socialist-run Caribbean nation for spreading the human rights focus to other associations and groups dealing with related issues.

The group tries to maintain a balance between the institutional world and autonomy, as occurs with many citizen initiatives in Cuba.

Although it has offices at the government’s National Centre for Sex Education (CENESEX), making the most of “organizational support and space provided by the institution,” HxD maintains its own objectives, said Roque.

The immediate goals, he went on, are to consolidate as an organization, become a presence on Internet-based social networks, participate in the annual events of International Day Against Homophobia (May 17), and organize a national symposium on sexual rights, which would involve individuals and groups with similar aims.

Additional efforts, he said, include building HxD as an opinion leader, create an observatory for homophobia in Cuba, and serve as a clearinghouse of information for the communications media.

But the greatest focus will be on human rights because Cuban society needs “to get rid of a little prejudice” in this matter, said Roque, who is also a critical care physician.

“When people hear ‘human rights’ they think of things that are extremely political. For some people, it can even be a negative term,” he said.

This prejudice arises from problems associated with denunciations against the Cuban government for the lack of spaces for political opposition, freedom of association and of expression.

Official sources, meanwhile, link the restrictions on civil rights to the more than 50-year conflict with the United States.

In this context, HxD is not the first group of its kind to emerge “sponsored” by CENESEX. Courses for transvestite, transgender and transsexual people, which in the last decade have drawn more than 500 individuals, include topics like personal and group empowerment.

As a result, with the aim of reclaiming and maintaining their masculine identity, the proposal came in July to create a social network of transgender and MSM (“men who have sex with men,” a behavior-based term used in medical and social research).

CENESEX is also involved with three groups made up of lesbian and bisexual women: Oremi in Havana, Fénix in the central city of Cienfuegos, and Las Isabelas in Santiago, in eastern Cuba.

Oremi opens its doors to anyone who shares a “solidarity, respectful, friendly and healthy” attitude towards the reality of the lesbian community.

Meanwhile, with 10 years of experience, the MSM Project of the government’s National Centre for the Prevention of Sexually Transmitted Disease focuses on preventing the spread of HIV. In Cuba, eight out of 10 people carrying the virus develop AIDS.

With representation in all of Cuba’s provinces and more than 1,500 volunteers, MSM-Cuba works to raise awareness about the different models of non-heterosexual masculinity and improve the situation of homosexual and bisexual men, who often face stigmatization and marginalization.

“In previous groups, the focus on human rights hasn’t existed,” said Roque, who is also president of the sexual diversity unit of the Cuban Multidisciplinary Society for the Study of Sexuality.

The dozen founding members of HxD represent a wide range of “masculinities.” Journalist and gay activist Francisco Rodriguez stressed to IPS: “It’s inclusive; it does not exclude heterosexual men.”

The creation of Hombres por la Diversidad represents for Rodriguez “one more step” in the growing struggle for acceptance of homosexuality that he began with his blog “Paquito from Cuba” a year ago.

“I believe greater visibility is needed in our country for those who are of sexual orientations different from the dominant heterosexuality,” he said.

HxD is “the natural result” of the first training session in “Sexual Diversity and Human Rights,” led by CENESEX in August, said Rodriguez, who is also a professor at the University of Havana.

The course, facilitated by Roque, borrowed a participative methodology from the Canadian non-governmental organization Equitas and contextualized it for the Cuban reality.

Most of the participants, who had strong leadership qualities from the beginning, decided when the workshops were done to form their own group, which became official this month.

Theologian Yoimel Gonzalez Hernandez, who studies gender and religion and is an HxD member, underscored the relevance of the mere act “of establishing a space for reflection” on these indispensable citizen debates.

Rodriguez wanted the initiative to turn into a “multitude” — one that is “organized, modest, patriotic, anti-capitalist, pacifist, environmentalist, cross-cutting and respected.”

But he also proposed taking on other essential focuses, like gender and race, “debates that have yet to be opened up as they should be” in Cuba.

The transformation of society that Men for Diversity seek requires changes in the way those silenced realities are understood.

“In Cuba, there does not yet exist a political discourse about sexuality at the macro social level, within those groups,” said Roque: “We cannot demand, nor can there be social change if we don’t think from the perspective of policies and politics.”