HAVANA TIMES – The protests against the regime of President Daniel Ortega in Nicaragua began on April 18, five months ago. The resulting crisis has left a death toll of at least 322 according to the Inter-American Commission for Human Rights, thousands of wounded, thousands of exiles, and hundreds are still missing. And the situation doesn’t appear to be anywhere close to an end. Nonetheless, the official discourse still denies the massacre and is attempting to project a false return to normality.

Since the civic rebellion began, thousands of Nicaraguans have participated in countless marches. Many of these protesters have been beaten, tortured, jailed and even condemned to long prison terms by the Ortega regime. During these same five months, cartoonist Pedro X. Molina has been documenting the tragedy through his cartoons.

Confidencial’s web magazine Niu asked Molina to choose five of his cartoons that best portray the civic rebellion in Nicaragua. “Out of the hundreds of cartoons drawn in this period, these are the five I chose. I didn’t choose them for being the funniest, or the best-drawn ones; probably many people’s favorites aren’t even here. But I chose these particular ones because they’re still relevant,” he assures.

Five months ago, Darwin Urbina was alive. On the morning of April 19, the day he was killed, he left home to go to work. At the end of that day he decided to visit his mother who lives near the Polytechnic University; he wanted to make sure she was alright after hearing that the National Police were attacking a group of some twenty students who had initiated a protest in that area.

Darwin, 29, never reached his mother’s house alive. He died from a bullet to the throat. His was the first death.

“Darwin Urbina was the first murder committed by Ortega’s death squads. From that time on, hundreds of Nicaraguans have been brutally killed by the governing couple and their henchmen; the number of abducted and missing can’t even be confirmed due to lack of access to the information. And they continue with this plan of denial, claiming that everybody (except themselves) “is overdramatizing”, the cartoonist comments.

In this drawing, Molina portrays the presidential pair clinging tightly to power despite the killing spree they’ve unleashed. The government at this time still only recognizes 198 deaths, all of which they blame of the demonstrators.

“I drew this the day that the Ortega paramilitaries burned the Pavon family alive. In addition to several adults, two babies – Darvelis and Mathias – also perished there. A little while later, another baby, named Teyler, was killed on a Managua street by a bullet in the head while his father was carrying him. Up until now, around two dozen minors have been killed by the dictatorship,” Molina writes.

This is one of Molina’s most frequently shared cartoons, because it depicts a case that caused indignation all over Nicaragua and also internationally. Many children have been orphaned during the protests as well. 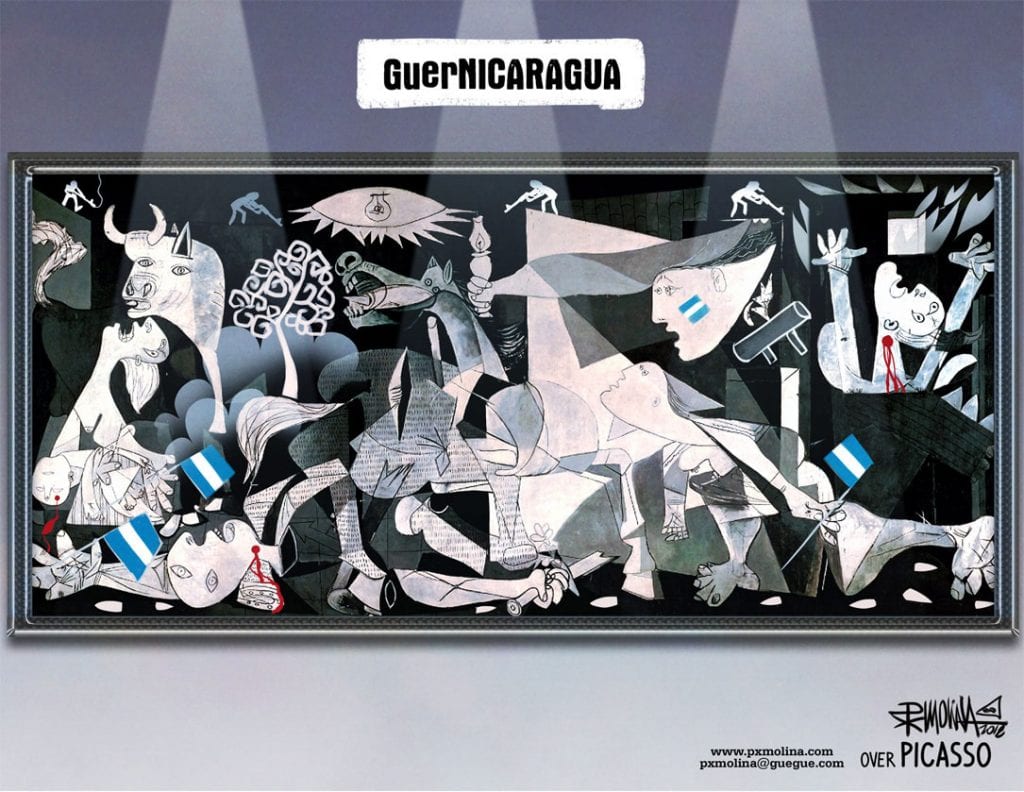 Based on Pablo Picasso’s canvas “Guernica”, a famous depiction of war; “I decided to adapt it to the reality in Nicaragua,” Molina confesses.

“You can see the children who’ve been murdered by bullets to the head, the adults shot in the neck, the damned metal trees, the fires provoked by the paramilitary forces and the snipers up on top,” the cartoonist describes.

The Spanish painter’s famous work was completed in 1937. Its title alludes to the bombing of Guernica, a village in Spain, on April 26, 1937, during the Spanish Civil War. Molina introduces Nicaraguan elements into his adaptation, such as the homemade mortars that represent the unequal battle of the demonstrators against the repressive forces of the Ortega regime.

“They want you to get out”

“This cartoon continues to be relevant, although now we’d have to widen the scope of insults that the vice-cartoon (Rosario Murillo) has bestowed upon us,” Molinia explains in reference to this drawing made in the wake of the Vice President’s insulting characterizations of the demonstrators. “Minuscule groups, nobodies, blood-sucking vampires, vandals, miserly souls, mediocre beings” –these are some of the dismissive words that Murillo has used to refer to the thousands of demonstrators.

The cartoon portrays how all over Nicaragua during these past five months thousands of people have stood up in protest to demand the resignation of Ortega as well as Murillo.

Molina explains that he has this cartoon as a staple tweet in his Twitter account “to remind us that we’re in debt to all the fallen, those in jail, those exiled by this dictatorship, and that in any way we can we must continue being their voice until we attain the freedom and justice that we deserve.”

“When you feel that fatigue is taking you down, that you’re invaded by despair, it’s at those times that we should recall with all the more reason the famous slogan: “Que se rinda tu madre!” [meaning “We will never surrender!”], wrote the cartoonist on July 12 when he first published this drawing.