HAVANA TIMES – The website www.ge.com/digitalvolcano developed by a team of explorers under Sam Cossman has been nominated for a prestigious “Webby,” an award recognizing “the world’s best websites.” The site allows the viewer to take a virtual tour of the Masaya Volcano, right up to the lava lake at its core.

Cosmann, who announced the news via his Facebook profile page, is asking Nicaraguans to vote for him.

“I’m more than excited to share with my ‘Nicaraguan family’ the news that the website ‘A Digital Volcano’ has been nominated for the most prestigious internet award.  A Webby award will let Nicaragua be known on a worldwide level for all to see,” he shared on the social network.

At the same time, he indicated that, thanks to popular voting, the site is currently in first place out of five websites nominated in the category of: “Best user interface.”

The site, which presents videos and a tour of the Masaya Volcano, holds 42% of the public’s votes, followed by the “The history of the Mausoleum of Augustus,” with 28% of the votes. Nonetheless, Cossman stated that he “needs help” to “maintain” that first place. 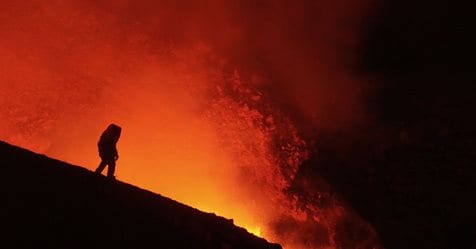 Each category of the Webby offers two awards: the Webby Award in which a team of 2,000 judges from the International Academy of Digital Arts and Sciences chooses the nominees for each category and elects the winner; and the Webby’s People’s Voice Award, in which the public’s vote is the decisive fact

The Webby Awards are held every year, and voting for this year will close on April 19th. Up until today, over 196,000 votes have been cast by some 44,000 users.  These recognitions began to be awarded in 1996, at a time when the Internet was still not an element of mass consumption.

The site for “A digital volcano” was launched in 2017.  It illustrates Cossman’s experiences exploring the colossal volcano together with a team of 60 people for three weeks in August of 2016.

“It’s taken over a year to create this virtual volcanic experience, melding aerial images of the exploration. There are 3D animations, photos, videos and visual data. The site shows how our team of over 60 scientists, engineers, explorers, firefighters, government officials and creative artists came together  to explore the role that artificial intelligence might have in the future to develop early alert systems,” Cossman wrote when launching the site.

Those who visit the webpage have the opportunity to descend to the “zero layer” of the volcano, where the lava lake is found and a virtual tour can be made.

The General Electric Company (GE) sponsored Cossman in this project.  During the site’s launching, the Company indicated that one of the objectives is to convert Masaya into one of the most advanced centers in the world for volcanic monitoring.