Granada’s mayor organizes the traditional pilgrimage to Jesus the Rescuer Church despite it being cancelled by the Bishop to avoid contagion.

HAVANA TIMES – While the Catholic Church in Nicaragua has cancelled mass or called for celebrating mass with a minimum of churchgoers, in order to avoid spreading the novel coronavirus, Daniel Ortega’s government is bent on ignoring the world health crisis.

In their eagerness to feign normalcy, Sandinista mayors have tried to usurp the authority of the Nicaragua Episcopal Conference (CEN in Spanish), organizing religious activities previously cancelled by the church to avoid large gatherings of people.

Following World Health Organization (WHO) recommendations, Monsignor Jorge Solorzano canceled Holy Week processions in Granada and prohibited large gatherings in all churches throughout the diocese. Yet Julia Mena, the Pro-Ortega mayor, organized and funded the traditional horse and wagon pilgrimage to Jesus the Rescuer Church in Popoyuapa, Rivas. The parish priest stated that he has no plans to receive the pilgrimage.

“We aren’t affected (by coronavirus), but ill-intentioned people would give anything for the opposite to be true. But here we are, protecting ourselves and protected above all by the hand of God,” Mena told the government’s media outlets. Before leaving on their journey, the pilgrims were given food and personal hygiene supplies by Granada’s mayor.

This isn’t the first time that Sandinista mayors have usurped church activities. In 2018, Masaya’s mayor, Orlando Noguera, held festivals in honor of Saint Jeronimo, the city’s patron saint. On that occasion, the mayor’s office used a replica of the saint and marched in a folkloric carnival affair with marimbas, traditional dances, liquor and an absence of religion. Normalcy was only a facade after the blood bath resulting from (the government’s) Operation Clean-Up in Masaya (July 2018).

The Ortega government has called the CEN bishops and priests “golpistas” (coup-mongers) for providing shelter to victims of state repression during the April Rebellion, as well as organizing the failed National Dialogue that attempted to put an end to the violence in the country.

Nevertheless, the regime calls itself “Christian”, and although Vice President Rosario Murillo invokes God daily to slow the coronavirus epidemic, she hasn’t adopted concrete methods to prevent the virus from continuing to spread throughout the country. 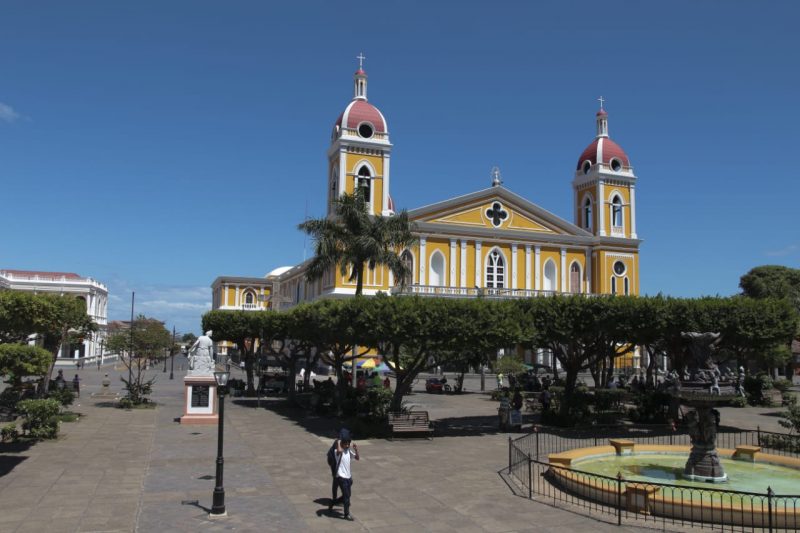 A limited group of Catholics attended the eucharist this week celebrated in Managua’s Metropolitan Cathedral, wearing face masks and gloves as protection again the coronavirus pandemic. The churchgoers also carried alcohol gel and practiced social distancing of more than 1 meter as recommended by the World Health Organization (WHO).

Churchgoer Omar Dabul told the news agency EFE that although he himself was attending mass in person because of his faith, “it’s not advisable to hold mass when many people are present, in order to avoid contagion,”. Dabul feels that the Nicaraguan Episcopal Conference should suspend in-person masses at some point, to prevent contagion in a pandemic of this magnitude.

This opinion is shared by Angelina Trejos, another of the few Catholics attending the eucharist. Ms. Trejos observed that the church itself is a point of reference, but prayer can be carried out in an intimate setting, and “still have that closeness with God”. “If the Church asks us to do so (not attend mass in person), we will comply,” said Ms. Trejos.

Occasionally, during mass, some churchgoers rubbed alcohol gel on their hands while maintaining the appropriate distance from others. Also of note was the use of masks by the altar boys assisting the priest.

The bishops also informed their priests that all liturgical services, including those on Sundays, and throughout Holy Week, could be celebrated without the presence of the faithful, although the churches and chapels of the Holy Sacrament will remain open.

Various activities have been cancelled, among them the traditional Stations of the Cross that reenact Jesus’ last hours prior to crucifixion, known as the Passion of Christ, cancelled by the Archdiocese of Managua as a preventative measure in light of the pandemic.

Cardenal Leopoldo Brenes has invited the faithful to follow the meditations of the Stations of the Cross through Catholic media and explained that the Passion of Christ processions throughout the rest of the country will be determined by the local priests and their parish councils.

The Archdiocese of Nicaragua also decided to celebrate the Chrism Mass of Maundy Thursday with only those priests who are renewing their vows, and instead of the washing of feet, they will instead carry out a washing of hands.

The diocese in Managua recommended that, in general, those who are vulnerable to the virus shouldn’t participate in person in the liturgical celebrations but should rather follow along through regular and social media.

Nicaragua has decreed no alerts or restrictions

Nicaragua has confirmed four cases of coronavirus, one of whom has died, and fourteen cases of suspected infection, but contrary to the rest of Central America, has not decreed any kind of alert or emergency regarding the pandemic, nor has it ordered a suspension of classes.

The country’s borders remain open and there are no restrictions on travelers’ mobility, nor will any form of quarantine be established for those infected with the virus, says the government.

Many Nicaraguans have decided to act on their own and follow the recommendations of the WHO considering the government’s failure to establish preventative measures, while limiting its involvement to only surveillance activities.

With information from EFE